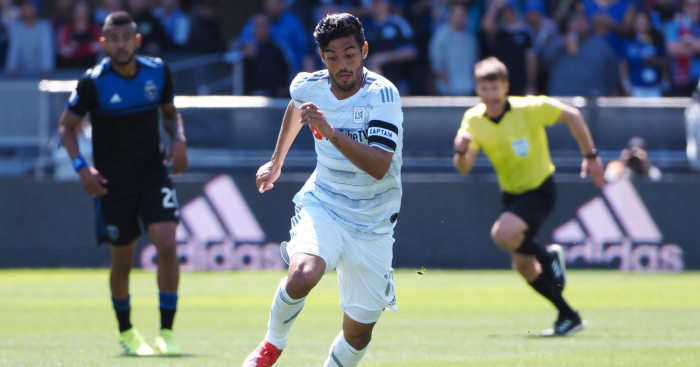 Carlos Vela was hardly a regular at Arsenal, but he still played enough to have a trademark goal. Now, at the opposite end of his career with Los Angeles FC, the Mexican has mastered another type of wonder goal.

We’ve long been accustomed to Premier League names of years past popping up in Major League Soccer, often even troubling the top of the scoring charts.

Wayne Rooney and Krisztián Németh have both stolen a march on their rivals with early-season hat-tricks, but they’re not right at the top.

That honour goes to former Arsenal striker Carlos Vela, with an impressive six goals in his first five games of the MLS season. And, as anyone familiar with Vela has come to expect, he hasn’t just scored – he’s scored in style.

Vela’s first against the San Jose Earthquakes this weekend couldn’t have been much easier, racing through to tap into the empty net after an error from home goalkeeper Daniel Vega.

However, it felt like he decided a goal that simple wasn’t enough – he had to add some real Carlitos gloss to proceedings, and he wasn’t going to be stopped.

After stealing in for his second on the stroke of half-time, the Mexico international completed his hat-trick in the manner of a man who had the opposition eating out of the palm of his hand.

By the time he collects Steven Beitashour’s pass, Vela has already seen one shot blocked in the move. By this point in the game, San Jose have identified him as the man to stop and have begun putting bodies in the way.

Sometimes, though, you need to take a short diversion to get to your destination, and so he opts to take a short detour away from goal before whipping the ball into Vega’s top corner on the turn.

You can’t prepare for what you can’t see, and Vela has found a way to blindfold 11 opponents at once, yet even a goalkeeper with a clear sight of the shot would have been helpless to keep it out of the top corner. 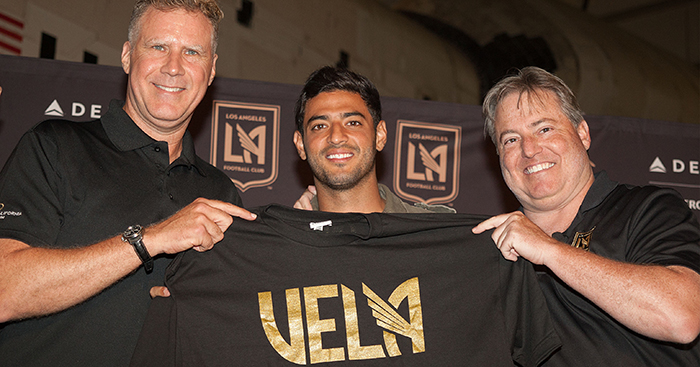 READ: Will Ferrell, Bob Bradley, Carlos Vela and the story of LAFC

Incredibly, Vela’s hat-trick comes a year almost to the day since he produced a near-identical finish for LAFC in their inaugural derby against LA Galaxy.

That game – and the Mexican’s two-goal haul – might have ended up being overshadowed by Zlatan Ibrahimović’s long-range debut winner as the Galaxy overturned a three-goal deficit to win the game, but it certainly shows the more recent goal was no fluke.

When we watch the strike against the Galaxy and see the similarities, it’s easy to see where he’s coming from.

However, for those of us who remember watching Vela as a young prospect in north London, ‘Vintage Carlitos’ suggests another kind of goal entirely.

At Arsenal, even as a player merely on the fringes of the first team, Vela became the Premier League’s master of the dink.

It felt at times as though he played football as if it was tennis, with exceedingly deliberate touches and, most importantly, the ability to get elevation on the ball when moving at walking pace or at full speed – it was all the same to him.

He set the tone with one of his first goals for the Gunners, floating the ball over Burnley goalkeeper Brian Jensen without the Dane even seeming to leave an opening or stray too far off his line.

Vela used the keeper’s momentum against him, taking the shot early as Jensen gathered pace and leaving him unable to turn back or even elevate himself enough to get near the shot – all he could do was wave as it passed him.

That same season, he’d arguably perfected the chip at the first attempt as part of a hat-trick against Sheffield United.

After taking Kieran Gibbs’ pass on his chest and leaving Chris Morgan trailing in his wake, Vela had the easy task of slotting the ball either side of goalkeeper Paddy Kenny. That would have been boring, though.

Instead, he lofted the ball barely an inch above the Irishman’s head, transforming Kenny into a floundering mess as the ball dropped over his head slow enough that you felt it might be stopping in mid-air to ask the keeper what he thought he was doing.

And with that, we had possibly the world’s first ever open play Panenka.

Ironically, as Vela was demonstrating his penchant for a different kind of goal, one of his MLS rivals – and another former Premier League man – was involved in some ‘Vintage Carlitos’ action of his own.

Former Swansea man Alejandro Pozuelo had already opened his Toronto FC account on debut with one of the slowest Panenkas in living memory when he received the ball in a position not too dissimilar from where Vela himself picked up possession in San Jose.

New York City goalkeeper Sean Johnson is a solid number one, with a handful of US international caps, and in short is not the sort of man who you usually disrespect like this.

However, like Vela in the early part of his career, Pozuelo decided to start out by walking over to the biggest kid in the playground and punching him square in the jaw.

Carlos Vela’s legacy will live on whenever we see a player produce a left-footed dink of any kind from anywhere on the pitch.

However, while others may be taking his lead, Vela is keen to remind us he’s nowhere near finished yet.

With 20 goals in 34 LAFC games so far, he wants to remind us there’s plenty left in the tank.