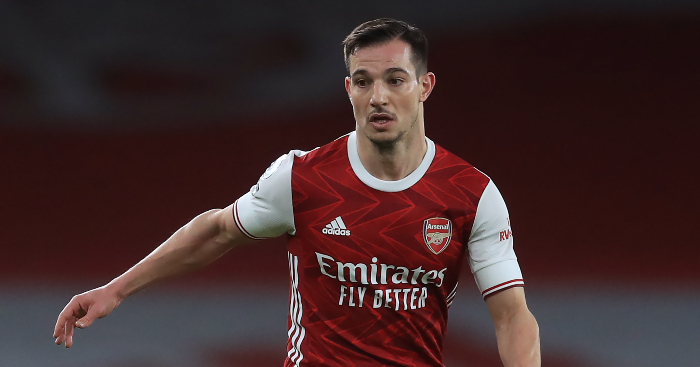 The narrative of Arsenal‘s season so far has been that the next generation of talent has stepped up where the old guard have failed to. That’s certainly true, but there can be exceptions to the rule – just look at Cedric Soares.

Kieran Tierney, 23, Emile Smith Rowe, 20, and Bukayo Saka, 19, have often looked at the centre of everything good Arsenal have managed going forward during the club’s recent upturn in form.

Meanwhile, there have been some serious question marks over the likes of Willian, Nicolas Pepe, and – until his two goals last night – Pierre Emerick-Aubameyang, players old and experienced enough to be leading the team during difficult times.

Like those, plenty questioned the wisdom of handing Cedric a four-year deal. The Portuguese defender turned 29 in the summer, and didn’t quite tear things up during the latter half of last season on loan from Southampton, having arrived already carrying an injury.

But he’s been quietly going about his business this season on the periphery of Mikel Arteta’s squad, featuring prominently and doing little wrong in the cup competitions.

On the evidence of his first Premier League start of the season, playing with Arsenal’s young guns in the Europa League has done him the world of good, while combining with Saka and Smith-Rowe appears to have given him a new lease of life.

Just look at the brilliant backheel nutmeg he pulled off against Newcastle’s Jamal Lewis, who’d been given a tough night’s work dealing with Saka and Cedric down Arsenal’s right flank.

Saka was buzzing about the pitch with his usual zeal, twisting and turning before playing it to Cedric out by the touchline. He immediately dashed forward, looking for the give and go, trusting the right-back could find him in spite of being shepherded by Lewis.

During Arsenal’s seven-match streak without a win before Christmas, you’d have expected him to take a couple of touches, turn and play the ball back in behind him, keeping the ball but with no real incision, to give the opposition an opportunity to get back and retain their defensive shape.

But this is a different Arsenal, full of confidence, enthusiasm and a willingness to take risks – all a natural byproduct with the fearlessness of youth.

Instead, Cedric was decisive with his backheel, nudging the ball through Lewis’ legs and into the path of Saka, who suddenly had space to surge into the box. These are situations that Arsenal just weren’t making happen earlier in the season.

In the end, the ball was played into Alexandre Lacazette, who was thwarted by Karl Darlow, but it was a chance that never would have been created were it not for Cedric’s impudence, his quick-thinking and the technical ability to execute it.