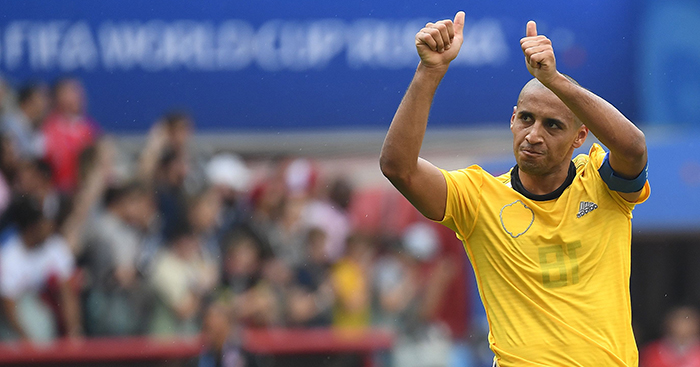 Football is about how you respond to adversity. Tunisia’s Wahbi Khazri saw his side go 5-1 down and responded by shooting from the halfway line.

In elite football, shooting from the halfway line means something. The act — almost impossible to pull off for most players — signifies confidence, technical ability and, more often than not, total dominance for the striker’s team.

Accordingly, halfway line shots are rarely attempted by players on the trailing side. The chances of beating the goalkeeper are slim; the chances of getting told off are high. Shooting from the halfway line probably won’t get you back into the match.

But there is another way to deliver a halfway line shot.

Outside of elite football, perhaps outside of professional football altogether, perhaps even outside of adult football, shooting from the halfway line can mean something else — something less glamorous than Beckhamesque perfection, Alonsonian opportunism or Rooneyist joie de vivre.

In the dankest corners of the amateur game, shooting from halfway can occur when the very opposite of dominance is happening: when the game is all but lost.

On these occurrences, a long-range strike can convey complete and utter disregard for the match, resignation that the game is lost or even a vote of no confidence in the abilities of one’s team-mates. It can demonstrate all of these things at once, or more.

When you’re being paid to play football, it’s definitely not a good idea to do this.

Yet on Saturday afternoon in Moscow, Wahbi Khazri brought this lesser-seen, Sunday league form of the halfway line shot to football’s grandest stage: the World Cup.

Rather than seem disrespectful or petulant, however, the shot was a thing of beauty.

The clock ticks over 90 minutes of Belgium vs Tunisia. Michy Batshuayi has just made it 5-1 to the Belgians.

Gala’s ‘Freed From Desire’ echoes around the Spartak Stadium.

In just a few moments, Tunisia captain Wahbi Khazri — technically now a League One footballer with Sunderland — will shoot from the halfway line.

Tunisia are going out of the World Cup. Despite holding England back for 90 minutes of their opening match, the North African side have been outclassed over two games. Belgium have proven themselves too strong, too skilful and too clinical. 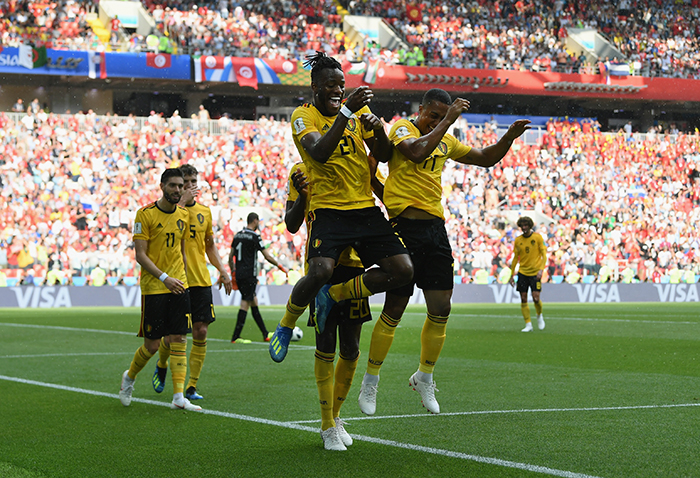 But he knows something else too. He is 27 years old. Tunisia have failed to qualify for their last two World Cups and are by no means guaranteed to return in 2022. Furthermore, squad players could be given a runout in the final group match against Panama.

This means Khazri might never again kick a ball at the World Cup.

So what does he do? 11 Belgium players and 50 yards of Russian grass stand between him and the goal.

All of a sudden, the song reverberating around the stadium becomes crystal clear. Will Grigg is not currently on fire, but Khazri can, if he chooses, be freed from desire.

All other sounds disappear. Khazri receives the ball from the restart, takes one touch and shoots from the halfway line.

Wahbi Khazri probably doesn’t know this, but BBC co-commentator Phil Neville got pretty annoyed about him shooting from the restart in stoppage time while 5-1 down against Belgium.

“Well I don’t know what he’s doing there; disgraceful really, that, from Khazri,” was the damning verdict. “Sums up his attitude.”

Neville, a former ally of David Moyes, who just so happened to be Khazri’s manager at Sunderland two seasons ago, went on: “I never liked him at Sunderland. When the going got tough at Sunderland he went missing.

“He’s gone missing today, the Tunisian captain. You wouldn’t like him in your team, that’s for sure.”

This is clearly a silly response from Neville, and several Sunderland fans used Twitter to defend Khazri, pointing out that a) the Tunisian helped save them from relegation in 2016 and b) barely got a look-in during the disastrous Moyes reign.

What is Phil Neville talking about with khazri? He never liked him because he always went missing? He was one of the main players that helped keep Sunderland up and then moyes never played him the season we went down, strange player to pick out. #safc #WorldCup2018

More importantly, Khazri’s country were effectively out of the competition at this point, and had been for most of the second half.

There was nothing to be won except some kind of personal enjoyment from the match. Shooting from halfway in such a situation isn’t disgraceful; it’s great entertainment. Fuck it.

But Khazri actually got a chance to vindicate his actions two minutes later.

If he had been “missing” for 90 minutes, then he certainly revealed himself in the 93rd, when he connected with Hamdi Nagguez’s neat pull-back to make it 5-2.

The game finished seconds later, but Khazri, trying to hold back a grin, was clearly satisfied. In three minutes, he’d taken a shot from the halfway line and scored a goal. Both, without doubt, were good things.

After the match, Khazri made a comment that will be music to the ears of Premier League fans — especially those keen on halfway line shooting.

“It’s not easy for a Tunisian to play in the Premier League, so I feel privileged because of the opportunity I’ve had,” he said.

“Now I am focused only on the World Cup, but I would like to continue playing in English football if I can.

“We’ll see. I will be open to all ideas and listen to everything.”

Everything except Phil Neville, we hope.