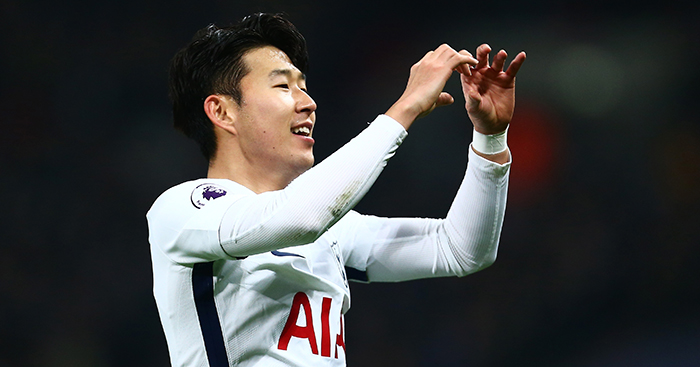 Shortly after half-time in Tottenham’s win over Everton in January, Son Heung-min provided probably the best assist of the 2017-18 Premier League season.

Spinning away from Jonjoe Kenny and terrorising Mason Holgate, Son might easily have scored himself had Harry Kane not been waiting to tap home his strike across Jordan Pickford.

However, it was the move before that, letting the ball run across his body and spinning quickly enough to leave Kenny in a different timezone, that really caught the eye.

But, while Spurs fans celebrated yet another contribution from the South Korea international, the match reports generally led with Kane and the brace which saw him surpass Teddy Sheringham’s total of 97 Premier League goals for the club.

It reflects the trends which have allowed – or perhaps forced – Son to remain under the radar.

It’s easy to forget how part of the conversation at the time of Son’s £20million arrival from Bayer Leverkusen surrounded the regular struggles of the club’s big-money signings.

When he moved to London, the club’s other big-money arrivals included the likes of Roberto Soldado, Paulinho and David Bentley, all unmitigated failures.

Both Mousa Dembélé and then-record buy Érik Lamela were also yet to hit their peak (though the pair can be considered more successful now), so the high hopes for the new man were tempered with a knowledge that they had been stung before.

However, although the goals weren’t free-flowing for Son in that first season – just eight, compared to 17 in his final year in Leverkusen – it still represented a decent return considering a fair few of his appearances came from the bench.

And Son’s second season at Spurs was about as successful as could be expected on a personal level.

Some of his 21 goals came from a more advanced role, filling in when Kane was unavailable and Vincent Janssen unfancied, but the tally remains a career best for a player whose role within the system was yet to be fully firmed up.

In most seasons, a league tally of 14 goals – two fewer than Eden Hazard, and more than the likes of Jamie Vardy and Roberto Firmino – would have been celebrated.

But those goals, plus six in the FA Cup and a Champions League group stage winner in Moscow, took a back seat when set against Kane’s 35 in 38.

Looking beyond Kane’s hogging of the headlines, part of Son’s ability to fly under the radar can be put down to perception.

There haven’t been too many East Asian success stories in the Premier League, but that’s no excuse to lazily look at one player from a certain country and automatically compare him to a compatriot.

“I played with Park Ji-sung at Man United, and they have similar qualities,” Phil Neville said of Son early into the 2017-18 season.

“Their attitude is fantastic. They give energy to their team.”

The first issue here is borne out in the numbers: Son has scored more since December 2016 as Park managed in seven full seasons at Old Trafford, while the Spurs man has already beaten his former international team-mate’s Premier League tally of 21 assists. It’s almost as if they offer different things.

Then we have the ‘attitude’ and ‘energy’ elements to Neville’s assertion.

First of all, those qualities are common to Spurs’ entire squad under Mauricio Pochettino, a squad defined by its double training sessions, hard running and intense pressing across all areas of the pitch.

Secondly, the shorthand of hard work and energy associated with players from South Korea – a shorthand tied inextricably to Park himself – detracts from the flair and positivity clearly evident to anyone who has watched Son play.

Perhaps part of this comes down to a subliminal desire to boost Spurs’ English core, thus relegating other players to a supporting role, but it’s becoming harder and harder to ignore Son’s contribution.

The highlight in 2017-18 was his late equaliser against West Ham, a thunderbolt from range when it looked like Spurs might struggle to make a breakthrough, but his calmness both on and off the ball was evident throughout the campaign.

Spurs are not left wanting when it comes to players capable of unlocking defences, especially those who set up to frustrate, and Son’s close control and tidy footwork acts as a more-than-handy alternative to Christian Eriksen’s lock-picking and Kane’s ability to turn a half-chance in to a certain goal.

The main thing to notice, though, is that the flicks and tricks inevitably come with a greater purpose: rather than existing to impress in and of themselves, the movements are there to set up and attack or free up space where a more by-the-numbers play could not achieve the same.

And all of that comes alongside the tidy finishes and the driving runs, like the one which helped create the rapid-fire counter for Eriksen to round off the scoring against Everton.

Others may dominate the conversation, even while Son’s achievements surpass others more lauded away from Wembley, but maybe that’s how he likes it.