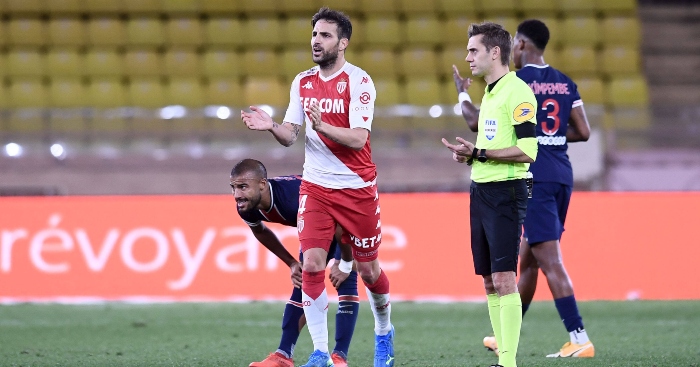 It’s fair to say that Cesc Fabregas has faded to the back of many people’s minds in recent times, having moved to Monaco in 2019.

However, anyone who watched the midfielder at Arsenal, Barcelona or Chelsea will know just how brilliant he is when on top form.

While he’s now 33 years old, it turns out Fabregas is still capable of winning games almost single-handedly, as he showed during Monaco’s Ligue 1 match against Paris Saint-Germain.

The veteran was only introduced to the action at half-time, with his side already 2-0 down following a brilliant brace from Kylian Mbappe.

He got about dictating the flow of the match almost immediately, using his in-game intelligence to find pockets of space to pick out passes to his team-mates.

The Spain international isn’t known for the defensive side of the game, but he also helped out his backline a lot, putting in four tackles.

He was simply superb throughout his half on the pitch and crowned off his display by emphatically tucking away the penalty that made the score 3-2, having already got an assist earlier on.

Cesc Fàbregas rolled back the years for Monaco tonight…

Fabregas may not be in his prime anymore, but he’s just taken us back to 2004 by showing the world that he’s still got it after all of these years.

He will now be hoping that he can continue this sort of form, as his goal contributions in this match were his first of the season – having previously made four starts and three substitute appearances in Ligue 1.

It has been shown throughout his career that the 33-year-old possesses the quality required to do this on a regular basis, though the question will be around whether he still has the legs for it.

Even if this does turn out to be a rarity now, we absolutely loved seeing Fabregas dictating a game of football once again.

17 of the best PL assists of all time: Berbatov, Ozil, Fabregas, Cantona…