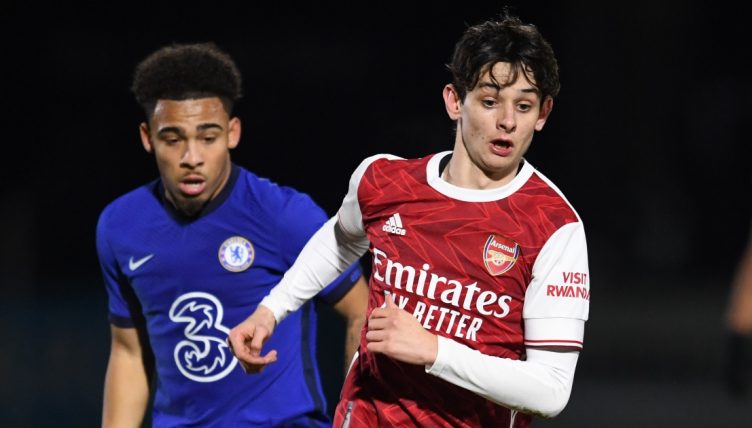 Arsenal have been churning out top quality youngsters in recent years, with Emile Smith Rowe receiving a deserved England call up yesterday, Bukayo Saka becoming the star of the team and the likes of Ainsley-Maitland Niles, Eddie Nketiah and Joe Willock receiving plaudits.

The success of Saka and Smith Rowe has shown there is a clear path to the Arsenal first team for academy players, which has inspired youngsters such as Folarin Balogun to sign a long-term contract and patiently wait for his opportunity.

Arsenal’s youth sides have been doing well this season, with Arsenal Under-23s sitting at the top of the Premier League 2 Division 1 table and Balogun the joint second-top goalscorer, with others such as Kido Taylor-Hart and Omari Hutchinson attracting attention.

But the biggest breakout star has without doubt been Charlie Patino.

The 18-year-old midfielder has made a big impression on his coaches and team-mates, and fans have been clamouring for him to make his first-team debut in the Carabao Cup.

Arsenal scout Brain Stapleton has no doubts about Patino’s potential and made a remarkable claim when considering some of Hale End’s alumni.

“Of all the years I’ve been scouting, he’s the best kid I’ve ever seen,” Stapleton told Goal.

“Sean O’Connor discovered Jack Wilshere and he said to me that Charlie is the best player who has ever walked through the doors at Hale End.”

Patino, who was signed from Luton Town as a 12-year-old, typically plays as a deep central midfielder, but is also comfortable in an advanced attacking role, which has drawn comparisons with fellow Hale End graduate Jack Wilshere.

Arguably the most talented player to come out of the academy this century, the former England international has praised the youngster, claiming: “The first-team players know who he is and he is a good player and one for the future for sure.”

Patino has been making great strides this season, but the moment which gained him the most attention from the Arsenal fanbase was his stunning solo goal against Manchester United Under-23s.

Dribbling past Phil Jones before chipping Dean Henderson, two players who have international experience, earned him rave reviews and further calls for his integration into the first team.

Playing well above his age group, there is plenty more to come from the youngster and it is only a matter of time before he eventually makes his highly anticipated debut.

Despite the fan clamour, Patino was not included in the matchday squad for any Carabao Cup game so far, with Arteta opting to play strong XIs against West Brom, AFC Wimbledon and Leeds United.

There may be space on the bench for the quarter-final against Sunderland; fellow 18-year-old Salah Oulad M’Hand was included in the squad against Leeds, and with a busy winter schedule, might be earmarked for a substitute role against the League One side.

Nevertheless, even if he has to wait for his chance, this is a superstar in the making and he will have plenty of opportunities in the near future.

Academy boss Per Mertesacker has praised Patino’s ability, whilst outlining when his first-team opportunity is going to come.

A little extract from my interview with @mertesacker on the decision behind keeping Charlie Patino at #AFC this season and what lies in store next for the 17-year-old. pic.twitter.com/90z6P9MmEP

In an interview with Football.London, the German World Cup winner stated that the plan for Patino was for him to remain with the Under-23 side, without considering a loan, and to be exposed to the first team further down the line.

This strategy is similar to the one used by Manchester City with Phil Foden. Foden never went out on loan, and Pep Guardiola was often criticised for limiting his game time, but this tactic fully reaped dividends, as limited exposure to the first team at a young age allowed him to develop away from the spotlight.

Foden is now one of the first names on the team sheet at City, and the success of this in-house patient development may have inspired Mertesacker, Arteta and Under-23 manager Kevin Betsy to adopt a similar approach when it comes to Patino.

Miguel Azeez, another highly-rated midfielder within the academy, joined Portsmouth on a season-long loan this summer, with the intention of gaining regular first-team experience in a challenging league to develop physically.

Patino will be watching his colleague with great interest, as a future loan should not be ruled out if Azeez proves successful down on the South Coast.

This piece was originally published in November 2021.