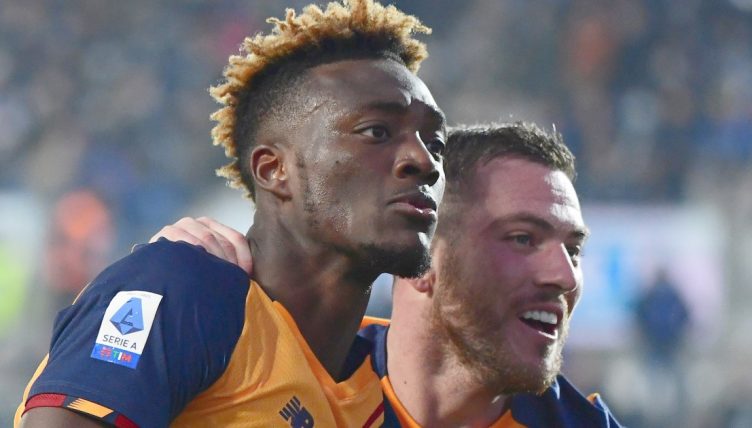 Receiving the ball back-to-goal in midfield. Playing a perfect one-two to turn and face the goal. Weaving through five defenders and sending the ball looping over the goalkeeper and into the net.

What’s more, doing it in the first minute of one of the toughest away games of the season to set your side on the path to a hugely significant 4-1 win and keep your top-four hopes alive.

All the ingredients of a magnificent, unforgettable goal, all the hallmarks of a moment that a centre-forward treasures and fans rejoice over.

And it was precisely the goal that Tammy Abraham scored for Roma against Atalanta in Serie A on Saturday afternoon – his first of two in the game, the 11th and 12th of an increasingly impressive first season in Italy.

Yet, despite all those delicious ingredients that should make a terrific solo strike, Abraham’s effort was… well, a bit shit.

To be fair, the first bit was great. The exchange with Nicolo Zaniolo was genuinely top-class centre-forward link-up play. Getting the ball and laying it off before turning to receive it again and running at his man is exactly the sort of thing Roma boss Jose Mourinho signed Abraham to do.

Yet what came next was a fantastically effective but Bambi-legged, gawky mess.

There were five defenders surrounding the England striker. The goalkeeper was there trying his best to stop the shot. And Abraham got past them all. But how he did it was odd.

After playing an unintentional one-two off the defender’s legs and bursting into the box, his poked finished whacked off the legs of Hans Hateboer, over Juan Musso and into the back of the onion bag.

And as the ball hit the net, Abraham flipped into the air, landing very uncomfortably on his neck. It was as graceful as a giraffe performing the lead role in the Bolshoi Ballet’s Nutcracker.

Tammy Abraham gets the ball in the 1st minute of the match, takes on 5 Atalanta players, leaves them all behind and scores.

But in its own way, the goal was perfect. If not perfectly formed then the perfect summary of why Abraham is such an enthralling watch.

For however the goals come and however weird they may look, the former Chelsea man will always find ways to drag his team up the pitch and, ultimately, to score. And, well, that’s the point of the bloody game, isn’t it?

Before the trip to Bergamo to face Atalanta, Mourinho’s Roma had not been in the finest of fettle in Serie A.

After a strong start to the season, they had won four of their previous 10 – not the form of a team that wants to compete for the top four.

They had fallen nine points behind Atalanta in fourth and, having not won any of their previous seven meetings with Gian Piero Gasparini’s swashbuckling side, you could have got long odds on a Roma win on Saturday morning.

Yet within a minute of kick-off, Abraham had performed the ungainly miracle of all-around centre-forward excellence described above, firmly closing the form book and lobbing it through an open window.

Roma were up and running. Their confidence returned and by the end, they had trampled all over the hosts despite having just 29 per cent of possession.

Zaniolo got a long-awaited first goal of the Serie A season, Chris Smalling made it three with a well-taken volley and, late on, Abraham rounded things off with a fourth that was far crisper than his first.

Without doubt, it was the most important victory of Mourinho’s time at Roma so far. Had they lost, Roma would have fallen 12 points behind Atalanta in fourth and would have been out of the top-four race before Christmas.

As it is, with six points difference between them and Saturday’s opponents, things are difficult but by no means impossible.

“Yes, I think so,” Mourinho said when asked if it was the best Roma have played this season. “We showed fantastic spirit. The players knew that we couldn’t be in control for 90 minutes. They were strong in every perspective.”

Just like it has for Roma, it has been an up-and-down campaign so far for Abraham. There have been goals and assists, but there have been poorer performances, especially during a dire spell of form in October.

Sometimes he manages to encapsulate that rollercoaster in single games. Against Zorya Luhansk in the Europa Conference League in late November, for example, Abraham missed an absolute sitter in the first half.

But he showed his gladiatorial spirit, kept getting in dangerous positions and before the end scored a brace, including a brilliantly inventive if slightly unconventional bicycle kick.

And that is what makes Abraham such a wonderfully effective presence. He is not all that aesthetically pleasing, yet he is always there, always giving defenders problems, always in the positions that a striker needs to get in to make a difference.

There are plenty of Chelsea fans who would be happy to see him return to Stamford Bridge at some point. But for now, Abraham is fine in the Italian capital, endearing himself to fans and, as he recently put it, having Mourinho turn him into a “monster”.

“You need that character, you need that presence to frighten defenders,” Abraham said while on international duty with England in November.

He’s certainly got that. And scariest of all for defenders, they never quite know what’s coming next.

If Abraham can take his oddly effective form from the Atalanta game into the second half of the season, we wouldn’t bet against Roma closing that gap to fourth.