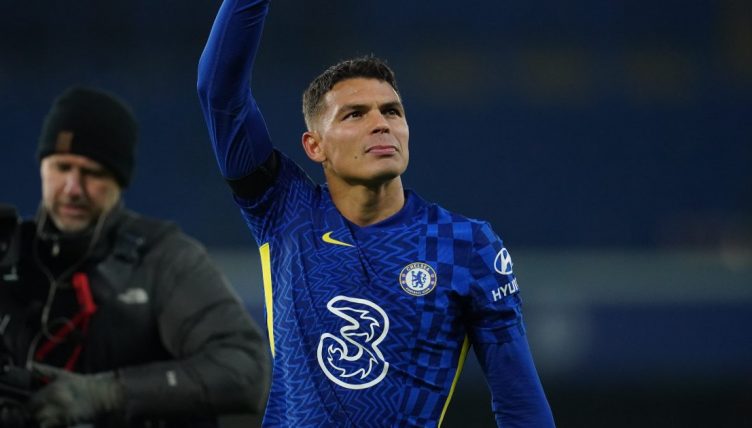 To ruthlessly flog a dead horse of a point, the man is 37. Thirty-seven. Nine years older than the forward he was marking on Sunday afternoon, Harry Kane. The same Harry Kane whose much-mooted move to Manchester City was discussed as the last chance of guaranteed silverware for an ageing player.

Yet here Thiago Silva is. Nine years Kane’s senior, and still absolutely dominant at both ends of the pitch. He’s proven it all season against a miscellany of opponents, but he loves doing it against Spurs more than anyone else.

In September at the Tottenham Hotspur Stadium, the big Brazilian was stunning. Calm, composed. Cool with the ball, razor-sharp without it. Oh, and he scored, of course, jumping highest at a corner, putting Chelsea 1-0 up 49 minutes in, a lead they extended to three by full-time.

On Sunday, after missing out on a start in the two League Cup semi-final ties owing to Covid infection, he was back lining up against his favourite opposition. And he and Chelsea ran Spurs into the ground, making it four wins out of four this season, eight scored, none conceded. It was the perfect antidote to their recent malaise.

Chelsea against Tottenham has been the 2021-22 season’s most theatrical West End epic. In its fourth act, Silva stole the show.

He warned Spurs twice of his aerial prowess in the first period, twice getting up to meet set pieces, twice narrowly missing the target much to his own annoyance.

Then there was the disallowed Tottenham goal, Kane’s push in Silva’s back spotted by Paul Tierney.

Gary Neville on co-comms claimed Silva was a “lucky boy”, insisting that the Chelsea man had “conned the ref”. Reviewing the footage, it seems an odd assertion that can be countered with two questions.

First, did Kane push Silva? Second, would Silva have played the ball, or at least been able to jockey Kane, were it not for the push? Case rested, m’lud.

Then in the second half, Silva came good on those three warnings – the September goal and two narrowly off-target first-half headers. The supreme Brazilian again rose above the Spurs defence, this time the net bulged to make it 2-0, Hakim Ziyech’s stunner having given them the lead just minutes prior.

But in among all the hot air surrounding Kane’s push and the raucous Stamford Bridge reaction to the goal – from which point Spurs never looked like coming back – a more subtly golden moment from Silva became hidden.

It might not have been as controversial or as exciting as the push or the goal, but it was equally as illustrative of the ageless defender’s efficacy.

Just a few minutes after Kane had the ball in the net, a Chelsea attack broke down. Just like they had for Kane’s disallowed effort, Tottenham tried to break quickly in the space behind Chelsea’s right full-back. Just like he did on that occasion, Antonio Rudiger got drawn in towards his man.

This time, Thiago was alert. Most 37-year-olds faced with a footrace with Harry Kane would, if you’ll excuse the blunt metaphor, shit themselves.

Silva was the picture of composure. He had two advantages. First, he’s still as physically fit as most players half his age. Second, he had anticipated the ball and was already a yard ahead of the Tottenham forward.

As Kane motored up behind him, Silva pulled away like a 600 horsepower Rolls-Royce, took one touch with his knee and left Kane fooled and foolish, floundering on his backside to the delight of the blue masses.

It was the epitome of Silva’s class, a 15-second passage to sum up a season of dominance. Silva played it off to Jorginho, who played it back to Kepa, who returned it to Silva.

At that point, the Brazilian could have launched a 60-yard pass to start another attack if he’d chosen. Instead, he nudged it five yards to Cesar Azpilicueta as if to calmly emphasise his point: ‘Job done.’

On Sky Sports post-match, Jamie Redknapp squawked: “We talk about great players and great signings, what a great signing he’s been. There were a few people doubting him because of his age, but he has been incredible.”

It’s the obvious point, but it does bear repeating.

Indulge us in a brief thought experiment: in the summer of 2020, Chelsea decide that signing a player with a chequered injury history who was being released by PSG because they adjudged him too old and too expensive was a risk not worth taking.

In this era of always signing potential, of constantly bringing in players with both eyes on the long-term, everyone would have nodded sagely and spoken of the wisdom of Chelsea’s decision.

Yet imagine the last 18 months at Stamford Bridge without him. Different? Just a bit.

His performances have constantly been praised at Chelsea, but with the caveat that he was playing in a back three that compensated for the effects of his age.

For this game, Tuchel deployed him in a back four and he was perhaps even better, covering more space, having even more of an impact on the game.

Earlier this month, Tuchel called Silva the “Benjamin Button of football.” Almost every time he goes onto the pitch, regardless of Tuchel’s tactical demands, Silva proves his boss right.