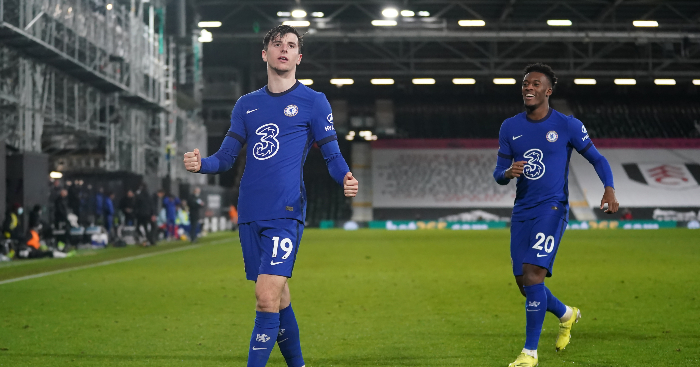 With Chelsea splashing the cash in all directions during the summer transfer window, Mason Mount looked like a man on the edge.

Kai Havertz and Hakim Ziyech were just two of those to arrive, threatening both the midfield area in which he had previously thrived and the wide-area he had often had to occupy.

Add them to the competition of Christian Pulisic, Jorginho, N’Golo Kante, Mateo Kovacic and Callum Hudson-Odoi, and regular football looked like it could soon be a thing of the past for the youngster.

But throughout the 2020-21 campaign, Frank Lampard has stuck with the man he once brought to Derby County and who has always thrived under his stewardship.

Mount has played all but one match this season and only come off the bench once – in a 0-0 draw against Manchester United.

Lampard’s faith has not translated into universal approval from fans. Many feel he is not technically proficient enough to lead the Blues to where they want to be. But, even with all of this noise in the background, he simply gets on with it, becoming one of the club’s most consistent performers in the process.

At a time when Chelsea’s attack is woefully lacking in reliable players, Mount steps up time and time again. During Saturday’s narrow 1-0 win against Fulham, he was the difference, scoring the winner in the second half and creating seven chances – more than any other Chelsea player has in an away game for five seasons.

Mason Mount made sure Chelsea got them.pic.twitter.com/pv6tIebXMY

While we were forced to endure the international breaks back in Autumn, they were invariably punctuated by online screaming matches between fans of Mount and nearly everyone else, who insisted Jack Grealish should play in Mount’s place and, for some reason, only Mount’s place.

But he never let the debate, or Gareth Southgate’s continued belief, affect him at all, scoring the winner against Belgium in October and England’s second against Iceland in November.

Saturday saw him step into a leadership role too. With the Chelsea attack largely clueless in how to break down a stubborn Fulham backline, it was Mount who looked the most likely to bring a spark of inspiration to proceedings, which he eventually did, arriving in the box to smash home a loose ball as his boss did so frequently.

His fury at a reckless Antonee Robinson challenge in the first half shone a light on his passion and will to win, also earning him plenty of plaudits online as well.

For many 22-year-old footballers, social media can be a serious weight on their shoulders. The temptation to read what every fan and pundit thinks of you can be far too tempting to resist, even if it can shatter your confidence or send your ego into overdrive.

But Mount is seemingly completely unbothered by the chatter that constantly swarms around him. Whether you think he will be the next Lampard or you think he isn’t fit to start, he really does not care.

He’s just going to keep on doing his thing.