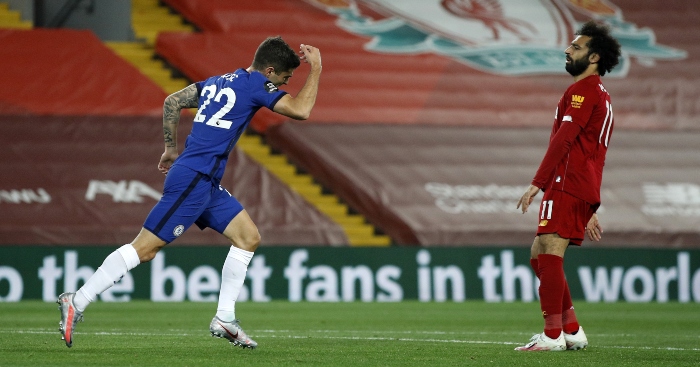 With every passing Christian Pulisic performance for Chelsea, the club’s desperation to prioritise attacking talent becomes a little more confusing.

Incoming duo Hakim Ziyech and Timo Werner are both incredible talents, and both offer something different, as does reported target Kai Havertz.

However, in Pulisic, they already have someone who you imagine would be more than capable of ripping entire teams to shreds if he didn’t simply consider it impolite to embarrass them too much.

When Pulisic scored Chelsea’s third goal against Liverpool, putting them within touching distance of the champions after having twice trailed by three, the substitute’s response looked more like anger than pride.

Sure, there was the classic ‘game’s not over, look busy’ approach which so many feel the need to follow, but this felt more like frustration not at the performance but that he was being forced to blow his cover far earlier than planned due to the limitations of those around him.

As he spins around and motors back towards the centre circle, the American carries the air of Clark Kent being bullied into packing a change of clothes when he just wanted to go to the pub with his co-workers and knock back a couple of lukewarm IPAs in peace.

It’s not that he hates the act of scoring itself but rather that he knows every time he makes it look this easy increases the chances of the next opportunity being made tougher.

Back at Dortmund, when Pulisic was making enough of an impression to convince Chelsea to part with more than £50million, he had the likes of Jadon Sancho available to steal some of the limelight and allow him to quietly go about the sort of football which would have stood out like a sore thumb elsewhere.

The same opportunity may arrive at Chelsea next season, but for the time being there’s a chance that his output in west London this term – where the Blues’ best form has coincided with his presence and their dips with his spell on the sidelines – means the damage to the notion of hiding in plain sight has already been done.

Even when laying on chances for those around him, Pulisic can’t help but give away his brilliance by ripping through the best defence in the league as if it wasn’t there.

Leaving Trent Alexander-Arnold and Fabinho falling over each other emphasises one of Pulisic’s great hidden qualities – an ability to disguise his own speed of movement and speed of thought to gift-wrap the illusion of control for those opposing him.

The worst part of all this is he hands it to them with enough of an earnest smile to ensure everyone skips the step where they wonder if his generosity might have another motive.

To follow this by dancing straight through Joe Gomez – and the fact that it is through rather than around does make a difference – gives us another scary concept to bear in mind: yes, he can trap defenders into losing their faculties, but even if they had everything in their power to stop him in his tracks it might not actually matter.

He wasn’t supposed to introduce Pulisic v2 to us this early in his arc. He was meant to have a little left in reserve to continue impressing us in new ways, but needs must.

There has been plenty of talk about who will miss out next season for Chelsea as they bolster their frontline going into the 2020-21 season, but we’d hazard a guess that it’s not the guy with a goal or assist every 111 minutes. Well, it shouldn’t be, at least.

Even without the numbers to back up the return, though, it’s easy to see the way Pulisic can improve those around him and make attacking football look that much simpler.

Against Liverpool, even in defeat, we witnessed the kind of performance which leaves defenders just as terrified after the fact as before it.

If he can harness that fear factor to his own benefit – and it looks for all the world as if he can – opposition defences will have so much to worry about next season that they’ll be tempted to just sit back and quietly take their punishment.