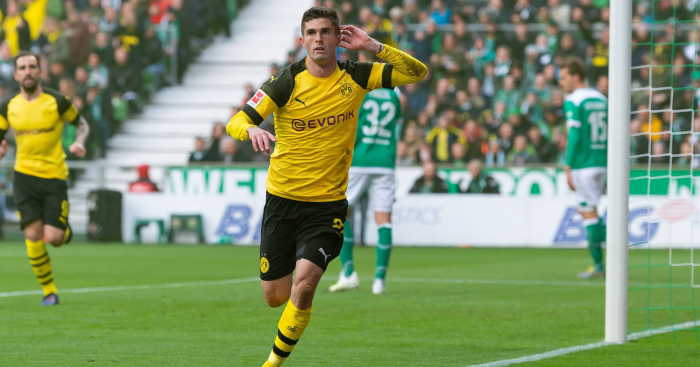 It hasn’t been the most enjoyable of seasons if you’re a Chelsea fan.

A place in the top four may have been secured, but while the club remains in contention for Europa League glory, Sarri-ball hasn’t exactly been a roaring success in its first year.

With an uncertain future in the transfer market to boot, it could be a long few years, but at least Christian Pulisic has given his club and its supporters something to be optimistic about.

Pulisic, who signed from Borussia Dortmund for £58million in January but was immediately loaned back to the German club, has seen his form at the Westfalenstadion overshadowed by the unplayable Jadon Sancho.

But if Chelsea are unable to add to their squad this summer, the American could become more important than he envisaged, more quickly than he envisaged – especially with Callum Hudson-Odoi expected to miss the start of the 2019-20 campaign with an Achilles injury and Eden Hazard seemingly Real Madrid-bound.

Pulisic has shown flashes of his greatness, of course – a cheeky nutmeg on Arjen Robben last season is one moment which caught our eye – but it would be hard to argue he has stood out more than any other member of Dortmund’s troupe of young and exciting attacking talents.

However, in scoring a beauty in the draw at Werder Bremen, he has reminded us what he can do.

Pulisic doesn’t look at first glance like the sort of player with a stunning change of pace in his arsenal. The 20-year-old looks capable of the speed-of-thought required to solve a tough equation or round off an essay with a really slick conclusion, but his effort in Bremen reminds us that appearances can be deceptive.

As he latches onto a pass from Thomas Delaney, the Bremen defenders must feel like audience members in the back row of an amphitheatre, eyeing up the American from a distance and deciding they have plenty of time to rise from their seats, stretch their legs and amble towards him.

If the initial burst of pace throws that all out of whack, the skill that follows serves the function of removing their heads from their bodies, mixing them up like the balls in an FA Cup draw and returning them with little care for which sets of shoulders they land on.

The most fluid of attacking plays can see forwards act as if time has slowed down for them, but this same skewed perception is what does for Miloš Veljković. The former Spurs defender strolls into the challenge, legs slightly apart for balance, only for his Pennsylvania-born opponent to roll the ball through him as if he’s a ghost.

Veljković might have realised by now what has happened to him, but it feels unlikely that he was able to gauge the gravity before the 90 minutes at the Weserstadion were up.

To call it a nutmeg almost gives too much credit to the Serbian, who is lured into something he doesn’t truly understand to the point that he’s barely an active participant. 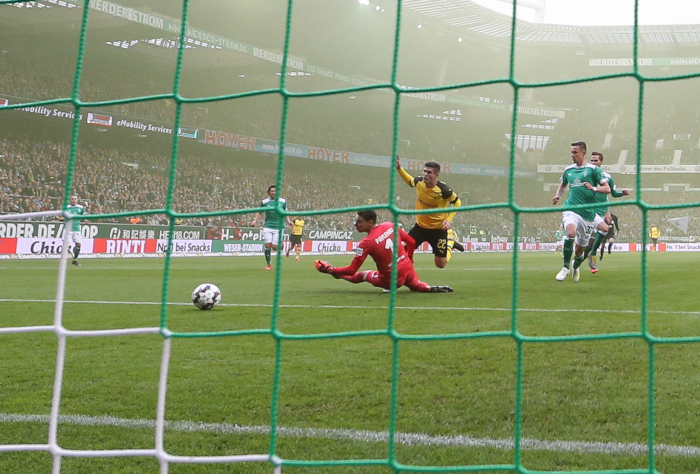 When revisiting the strike from behind Jiri Pavlenka’s goal, centre-back Sebastian Langkamp looks the most likely to be able to stop the surge.

The 31-year-old has a perfect view of Pulisic’s approach, shifting from side to side to keep the American in his sights and doing all he can to stay on his toes. All of this would be fine if Pulisic was moving at a similarly leisurely pace, but he seems to have only gained power from the nutmeg.

Sometimes we’ll see players find a way through an opponent’s legs and immediately look for a lay-off, almost to give themselves a breather to marvel at their own brilliance. And there’s nothing wrong with that on occasion – recognising your own greatness is, after all, an important trait in any player who wants to reach the summit of the game.

However, Pulisic recognises he’s flying solo even before Veljković’s approach, allowing him to kick into an extra, hidden gear to burst between Langkamp and right-back Marco Friedl and make room for the finish.

As the Dortmund man slots the ball past Pavlenka, part of Langkamp’s brain is still confidently approaching, thinking he has him exactly where he wants him, even if the other 95% of him is engaged in a panicked retreat. 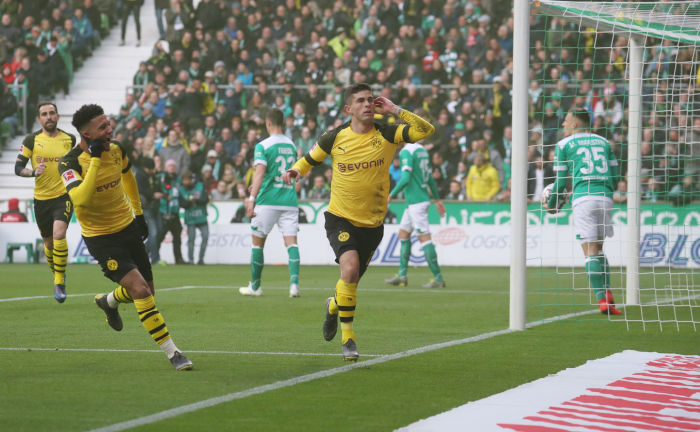 If you needed any more of an indication of the quality of the goal, you just need to look at Jadon Sancho’s reaction.

As he approaches Pulisic to join the celebration, you can see the Englishman with visibly puffed-out cheeks, as if only just catching his breath from watching his colleague.

Remember, too, that this is just five minutes into the game, at a stage when players will often still be getting a feel for their surroundings, and yet Pulisic has no time for such niceties. He has seen an opening and gone for it, leaving defenders trailing in his wake before they have even had the time to build up a sweat in the grander scheme of things.

If Chelsea can get this sort of behaviour out of him on anything like a regular basis, the injury to Hudson-Odoi and the potential departure of Eden Hazard might end up hurting a little bit less.