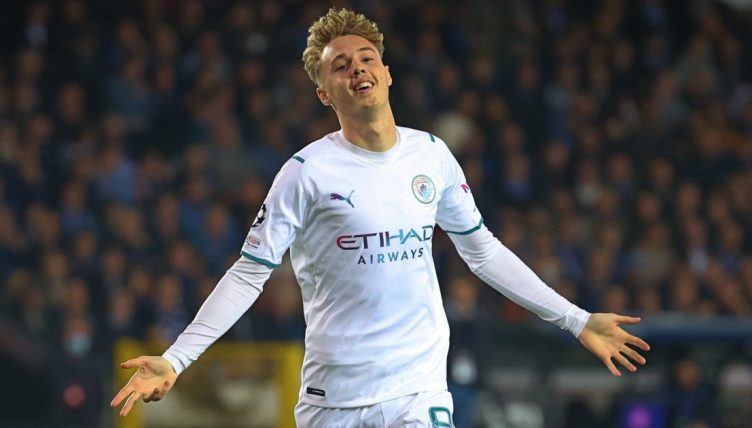 Their FA Cup tie at Swindon Town, broadcast on ITV for the nation’s prime-time entertainment, saw Cole Palmer steal the show – both before and after the match.

Palmer, lining up alongside the likes of Kevin de Bruyne and Bernardo Silva, turned his opponents inside out with a virtuoso display of attacking intent that was capped with his first goal in the competition.

The 19-year-old opened the floodgates in City’s 4-1 victory by setting up Bernardo for the opening goal. Picking the ball up on the right flank, Palmer reached into his magic box of tricks to elude his marker with a drop of the shoulder.

Having left his opponent contemplating a career change, the winger darted towards the byline before drilling the ball across goal for his senior team-mate to tap home.

City boss Pep Guardiola, who was unable to make the trip south after a positive Covid test, must have been purring with delight at his latest project.

Palmer sealed the win for City with a delightful curling effort and treated the nation to a wonderfully blunt interview that suggested the Wythenshawe-born youngster hadn’t gone through the mandatory media training course.

Palmer has already scored in the Champions League this season and, considering City are making a mockery of the much-touted ‘three-way’ title race, opportunities in the Premier League cannot be far away.

Only a fool would bet against him taking them.

Born in May 2002, Palmer was a boyhood City fan and at joined the club aged eight before progressing through the Academy age groups and captaining the Under-18s during the 2019–20 season.

The coaches already had him pegged as a standout talent. Confident on the ball, blessed with strong desicion-making and adept at playing anywhere across the forward line, it’s no surprise that Guardiola began to take a keen interest in his development.

“We have Cole Palmer who will be an exceptional player,” Guardiola said in a press conference last season.

After his debut, the boss said: “He started a bit shy. That’s normal but he’s an incredible young lad.

“He has been training with us for two months, showing us a lot of things and is a new guy to come here. He has a good perspective and a good future in this club.

“He is a humble guy, he works a lot, with our counter-attacks, he was so intuitive to help us run and he is a guy who finishes incredibly like Phil [Foden].”

After making his first-team debut in a League Cup match at Burnley in September 2020, City have followed a similar method to the way they integrated Palmer’s fellow academy graduate Foden.

The method, which involves training permanently with the first team, grabbing the occasional minutes as a substitute and starting the odd Cup game, can frustrate outsiders but it hasn’t hindered Palmer’s rise.

He has made seven starts for City’s Elite Development squad this season, including a 5-0 victory over Leicester where he scored a hat-trick on the same day as he made a brief appearance for the first team in their league win over Burnley.

And the technically-adept forward scored a brilliant solo effort against Kosovo in September on England Under-21 duty. Showing his marker a clean pair of heels, Palmer foraged his way into shooting range before unleashing a classy effort that kissed the side-netting on its way in.

Again, it’s the little shimmy and the drop of that left shoulder that makes his marker look a fool.

Cole Palmer has magic in his boots. Such a brilliant prospect… 🔥pic.twitter.com/2Ax4QZ6dNx

Palmer’s man-of-the-match performance against Swindon will only have served to highlight his potential among the nation’s football fans.

“He obviously is a huge talent, that is no secret to anybody,” said Guardiola’s assistant Rodolfo Borrell, who took charge of the game.

“It’s about being patient, keep working hard, because you still have to work hard and then, when you have these kind of opportunities to show the talent that he is. He needs to show that on a consistent basis when he has the chance to perform.

“But obviously a huge, huge quality and great potential and great for us as a club. And for him as a player.”

His England Under-21 coach Ashley Cole was just as effusive: “I’ve had the pleasure to work with him and see the quality he possesses. He’s a very intelligent winger that likes to come off the lines. He’s got a bright future.”

Everything seems in place for Palmer to become City’s latest homegrown England international. As if they needed any more quality.

David Silva: A man who deserves a Zizou-style portrait more than most