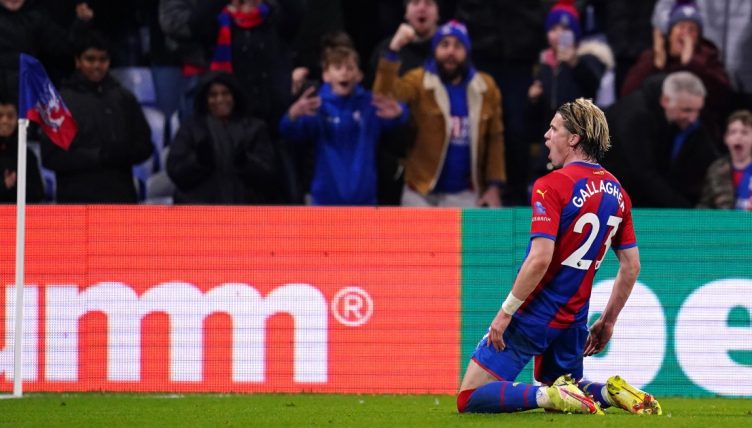 It’s been something of a breakout season for Conor Gallagher.

Gallagher is yet to make a senior appearance for Chelsea and was sent out on loan to Crystal Palace for first-team experience at the start of the 2021-22 campaign.

Where many have faded into obscurity, finding themselves trapped in endless temporary moves without ever running out at Stamford Bridge, Gallagher’s performances for Palace have made it a question of when, not if, he becomes a regular in the Chelsea first team.

The 21-year-old has been directly involved in 41% of Palace’s goals in the Premier League – the highest proportion for a team by any English player in the competition this season.

And his midfield work rate and willingness to carry the responsibility on his slender shoulder has marked him out as an elite player in the making.

His tender years won’t stop Palace fans from making the case for greatness already. Gallagher ran the show during the 3-1 victory over Everton at Selhurst Park, demonstrating the inventiveness of Steve Jobs with the sharpness of a brand new pair of scissors to win the Man of the Match award.

Yes, Everton offered all the resistance of a damp paper towel but the paucity of the opposition shouldn’t be allowed to detract from Gallagher’s eminence on a midwinter’s evening in south London.

He swept Palace into the lead from Jordan Ayew’s smart cut-back, exploiting Everton’s aversion to completing their defensive duties with relish.

Patrick Vieira’s side have surprised many observers with their more forward-thinking outlook this year but they still resemble individual jigsaw pieces than a completed picture.

This explains how, despite being the more threatening team, they entered injury-time just 2-1 ahead and liable to be sucker-punched.

Gallagher prevented this heartbreaking occurrence. Punishing Seamus Coleman for a hurried clearance, the England international picked up the ball 25 yards out and launched the kind of howitzer not seen since the Battle of Passchendaele.

Jordan Pickford would have been better off getting out the way rather than making a token effort to save it. Game over.

🎙️ "He started it, and boy has he finished it!"

The 21-year-old seals the deal for #CPFC with a stunning strike 💥 pic.twitter.com/xZOaDsjN3c

Talk will inevitably turn to Gallagher’s immediate future, with some Chelsea fans begging the club to recall their young starlet. Considering Chelsea’s creative limitations in midfield, the blond-haired creator could provide a much-needed shot of adrenaline for their title push.

But it sounds like Gallagher is happy at Selhurst Park for now. Speaking after the game, he said: “I love it here. Hearing the fans sing my name is a great feeling for me and gives me confidence, which is amazing for a player.

“Hopefully I can continue to impress them. I always give my all and I try to affect the game as much as I can.”

“I am not surprised at all and Conor is not the kind of person who will be too busy,” Vieira added.

“He wants to improve, he is really humble, is working hard and the challenge for him is to maintain that level to fulfil his expectation.

“Today he was fantastic and I think when the team play at that level as well, it allows him and some of the players in the team to express themselves.”

The sky appears to be the limit for Gallagher. He’s already become a must-have asset on Fantasy Football and talk of the PFA Young Player of the Year award is anything but far-fetched.

La Cobham has done it again.