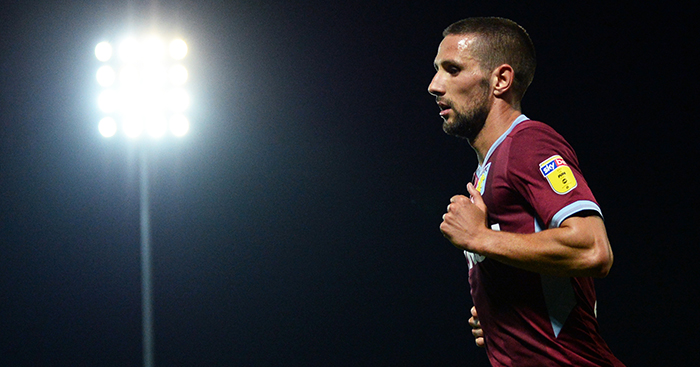 Conor Hourihane once again proved his ability to score a free-kick you wouldn’t expect in Aston Villa‘s win at Derby – yet at the same time it was a free-kick we’d definitely seen before.

When you watch enough football in your life, certain things will have a knack for repeating themselves.

We’re not talking purely in terms of players doing the same thing over and over, like Thierry Henry’s trademark curling finish or Roberto Firmino’s knack for doing things without looking, though those are enjoyable in their familiarity.

Instead, we’re talking about goals which, both in their execution and their surroundings, evoke other memorable efforts from years past.

Wrong side is the right side

Conor Hourihane has enhanced his reputation as a dangerous set-piece taker this season, having found the net from the occasional set piece last term, too.

A lot of the time, he has also shown a knack for scoring from what most would normally consider the ‘wrong’ side for a left-footer, curling around the wall on those occasions where it doesn’t look like there is even a suggestion of a gap.

His effort against Nottingham Forest, for example, was less threading the eye of the needle and more a case of replacing the needle with a hula-hoop while everyone had their back turned.

It’s one of those situations where, as a defending team, you begin to question everything you’ve been taught. It’s as if you’ve laid the table and served up a delicious meal, only for Hourihane to step up and sweep the tablecloth out from underneath it all.

Round two would arrive against Derby County, and it would be even more eye-catching.

However, as well as bringing to mind the effort against Blackburn, Hourihane’s latest effort bore more than the slightest visual resemblance to another goal from years gone by, albeit one with less fond memories for Villa fans.

The starting position is not hugely dissimilar to the starting position against Blackburn. However, rather than whipping the ball around the wall, the man from Cork is able to get more elevation on the effort and in the process give Scott Carson absolutely no chance.

The Los Campesinos lyric “totting up my worth in stamps but doing it in second class” was written about this goal – Hourihane has found the postage stamp to pay for his travel, only to waste it on a 70-mile round trip.

Not that Villa’s fans will mind all that much… well, not until they’ve figured out which other goal the strike reminds them of.

It might have been just before 5pm when Hourihane stepped up to seal victory, but the floodlights at Pride Park had already kicked into gear, giving the feel of the dying embers of a midweek cup tie.

The white shirts and dark shorts of Derby, up alongside the distinctive claret and blue of Villa, are unmistakable with that backdrop. With those kits, that lighting and the angle you could see the goal out of the corner of your eye end instantly bring to mind Jay-Jay Okocha’s strike against Villa for Bolton Wanderers back in 2004.

As with those rare occasions on which Arjen Robben finds the net with his right foot after coming in from the left channel, we can view the goal less as a homage to Okocha and more a near-reflection of the Nigerian’s strike.

It’s as if someone bottled Sam Allardyce’s 2004 squad and threw it into a hall of mirrors, where it remained right up until this week. The only difference being that when it re-emerged, the colours had switched and right had become left.

It’s the man in white scoring with his right foot, rather the man in claret with his left, but the prospect of scoring from that position is no less stupid.

Indeed, little else has changed. The keeper’s dive is similarly hopeful rather than expectant; the wall similarly smug and then despondent.

Even the camera takes a similar stance, opening up out of mere courtesy, as if to say “sure, it’s *possible* to score from here, but let’s be realistic”. You’d think someone might have learned from the past.

Okocha is not the only name in Hourihane’s arsenal of impressions, of course.

Left-footed players tend to get divided between rifles and wands, depending on the manner in which they score their goals.

In the former camp we have the likes of Laurent Robert and John Arne Riise, while the latter features such greats as Álvaro Recoba and Alessandro Diamanti.

Hourihane, however, may have cracked the problem, and all he’s needed to do is mimic right-footed players’ shots with his left.

The Okocha goal might take come perfecting – after all, the Bolton man’s strike came from a slightly wider starting position – but his goal in last season’s Second City Derby also had a familiar feel to it.

And here’s Jamie Vardy, scoring from a similar position, except the former England striker is using his other foot and scoring for, not against, the team in blue. Even the despairing dive of the goalkeeper as the ball arcs over him is near-identical.

As we ended the weekend watching Manchester City open up a two-goal derby lead and then briefly and needlessly panic, it’s refreshing to know football has a finite number of pieces and the variation comes from them fitting together in different ways.

There will be weeks in which the worst of the game is regurgitated by its most talented players, but other periods will see us treated to those usually outside the spotlight taking the time to emulate some of the game’s bigger names.