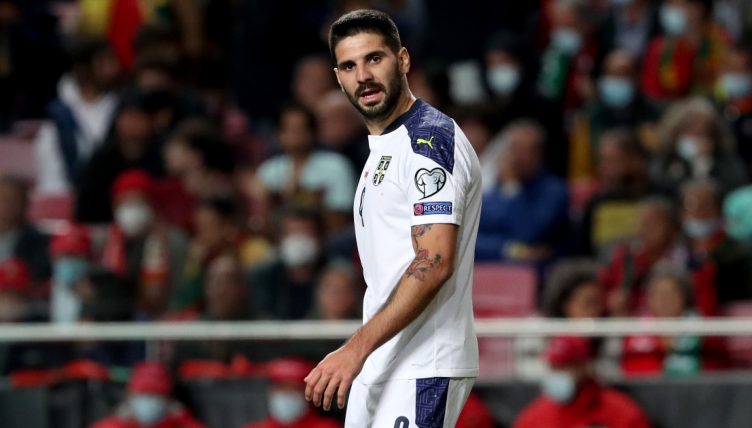 We’ve been here before.

It’s the 90th minute of a huge game, which sits on a knife-edge. A goal would change everything.

The ball gets sent into the far post. And there he is. The most prolific goalscorer in Europe this season, no one in the history of his national team has scored more, and he’s somehow peeled away unmarked.

He makes no mistake with his header, and it’s barely stopped bouncing in the back of the net by the time he’s wheeled away and taken his shift off.

Cristiano Ronaldo sits dejected on the turf, while the match-winner Aleksandar Mitrovic is swarmed by a throng of Serbian bodies in an almighty pile-on.

Aleksandar Mitrović scored an injury-time winner as Serbia leapfrogged Portugal to seal their place at the 2022 World Cup! 🇷🇸🔥 pic.twitter.com/EOod5NCYAR

So often that man has been Ronaldo.

In qualification for Russia 2018, the Portuguese icon scored 15 goals – only Robert Lewandowski scored more – which proved decisive in edging Switzerland to the top spot and automatic place at the tournament.

In the second leg of the play-off between Sweden and Portugal for a place at Brazil 2014, Zlatan Ibrahimovic scored twice in Stockholm. Ronaldo scored a hat-trick.

Two months ago, the 36-year-old kept Portugal’s qualification campaign on track with two goals in the final five minutes in a 2-1 comeback victory over the Republic of Ireland.

Even a severely underperforming Manchester United remain on course to make it to the Champions League knockouts thanks to his late goals against Atalanta (twice) and Villarreal.

Yet, with all that weight of history behind him, this was one 90th minute that didn’t belong to Ronaldo.

There’s every chance that he’ll still make it to a record-equalling fifth World Cup next year, but his ticket to Qatar was gleefully snatched away – like Chris Tarrant with a cheque for £16,000 – by a striker from the second tier.

This was Mitrovic’s moment – a goal destined to be eulogised and reminisced about for decades to come in Serbia. It wasn’t quite David Beckham’s free-kick against Greece, but it was every bit as important, and demonstrates where he is right now. Always in the right place at the right time.

Almost exactly a year ago, the striker’s missed penalty in the play-off shootout against Scotland cost Serbia a place at Euro 2020. He was looking more lumbering than powerful as Scott Parker’s Fulham struggled in the Premier League, was often dropped, and ended the campaign with just three goals for the relegated side.

For the second time in three seasons, his potency in the Championship fired Fulham to the top-flight, but his poor performances in a dysfunctional side led to some critics placing him in The Huckerby Zone – too good for the Championship, not good enough for the Premier League.

After all, there can be no questioning that Mitrovic is too good for the Championship, a league where he looks a one-man wrecking ball, like when those three Japanese professionals took on 100 kids.

It should be no surprise that he so predictably tears it up at that level. In the reverse fixture against Portugal back in March, at the age of 26, the No.9 became Serbia’s all-time leading goalscorer with 39 goals in 64 appearances.

To put that record in context, Ronaldo – now the all-time leading goalscorer in men’s international football history – had scored 22 after as many games with Portugal.

Not only has he scored eight goals in nine appearances for his country in 2021, but he’s scored 20 goals in Fulham’s 2021-22 Championship campaign so far. Twenty. It’s only mid-November. Eleven shy of the single-season record with almost six months to go.

Lionel Messi has yet to open his Ligue 1 account, Ronaldo has four Premier League goals, Harry Kane has one. At the same stage last season, Brentford’s Ivan Toney – who many argue had as good an individual campaign any player has ever had in the Championship – had scored 10. Half as many.

“This is the best form I have had in my life,” the Serbian said after scoring a hat-trick against Fulham’s (supposed) promotion rivals West Brom last month.

“I feel good, I feel confident. In this team, on the pitch I know that I have a lot of quality around me, I know that the manager really trusts in my abilities and trusts in myself. We play good football, we have a good time – why not be confident?”

It’s a simple enough concept. Mitrovic has shown that in the right set-up, for club and country, he’s a ridiculously lethal centre-forward.

In Fulham’s prior stint in the Premier League (2018-19), the striker scored a respectable 11 top-flight goals. You could easily imagine him hitting double figures year on year, ala Chris Wood, were he the focal point for a side like Sean Dyche’s Burnley.

Too good for the Championship? Absolutely. Not good enough for the Premier League? Let’s not be so hasty. In this kind of form, there are no limits to where he can go from here.