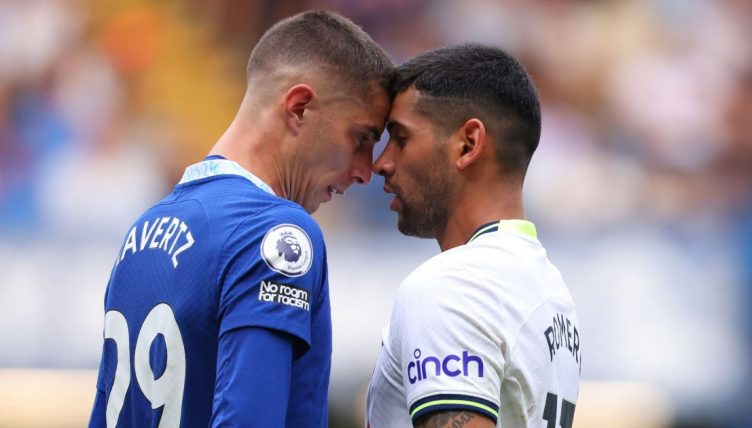 Or perhaps welcome is not the right word.

You’ve probably seen it by now, the hair pull that made Peter Crouch’s World Cup effort look like a gentle caress. The hair pull that Romero somehow got away with despite VAR being able to see the images in 4K HD on a 50-inch TV.

If not, you can watch it below. If you have, watch it again anyway.

As then-Manchester United manager Louis van Gaal said when former Premier League shithouse Robert Huth pulled Marouane Fellaini’s curly barnet back in 2016, “Only in sex masochism. Then it is allowed.”

On Sunday evening, at the end of a fraught, absurd 90 minutes of peak-Barclays satire between Chelsea and Spurs at Stamford Bridge, Romero donned his latex and tugged the Blues new £63million signing Cucurella to the ground by the follicles.

Van Gaal was right. Such things are not acceptable outside the confines of the sex dungeon. Romero should almost certainly have been sent off.

In fact, he could have been sent off twice over in a game where he did everything within his power to turn the temperature up way past boiling point at an already-sweltering Stamford Bridge.

But the fact that he did get away with it was almost admirable.

The gall and the nerve to do that in broad daylight three yards away from the ref and in front of 25 Sky Sports cameras and almost 42,000 packed onto the uneven terracing in west London. Then to escape unpunished? Ha!

But it had been coming, or something like it had, ever since Cucurella had fouled Spurs’ Argentine centre-back in the ninth minute, lighting a fire in the cave of a footballing monster.

That hair tug wasn’t the whole story. Not even close.

Shithousery aside, Romero was genuinely excellent at the Bridge. Spurs were dominated for much of the game, but Antonio Conte’s mad dungeon master had done his all to keep the Blues at bay, winning 11 ground duels, making seven tackles and five clearances, and vitally blocking a shot.

Throughout, though, there had been the special Romero spice that Premier League audiences are already coming to expect.

For the minutes preceding the hair pull incident, Romero had been locked in a mini-battle with Kai Havertz, a conflict from which only one man could possibly emerge victorious.

Havertz inadvisedly squared up to Romero. The next chance Romero got, the treatment Havertz received was as resounding as it was inevitable.

@OptaJoe. Not clear if Havertz in control for first one, but he is shielding the second one 🤷🏻‍♂️. Neither given as Romero tackles. Always subjective with tackles but appreciate you taking a look pic.twitter.com/PUry9aIEeW

Three minutes later, Thomas Tuchel hooked his German attacker to save him from embarrassing himself any further.

Then came the unsolicited sex masochism, the peak of fucked-up shithouse weirdness in a game that was overflowed with it, as much from the touchline as on the pitch.

But there was still time for more, for a little bit of afters once Harry Kane had equalised from the corner that immediately followed Romero’s over-vigorous check to make sure Cucurella’s mop really isn’t a wig.

As Spurs’ players wheeled away to celebrate, Romero made a beeline for Reece James, screaming in the face of the full-back, who must have thought he’d won the game with the fine 77th-minute goal that sparked a Mourinho tribute celebration from Tuchel.

Quite why Romero chose James as his target for that treatment was unclear.

Perhaps there had been something said about Romero’s between the first and second corners.

Or perhaps we should not ask why at all.

Just look at the baffled expression on the face of Richarlison – a man who’s had his own run-ins with Romero – as the Argentine covers James in a shower of rage-flavoured spittle. Romero is inexplicable.

He’s a frothing, snarling, screaming vehicle for Antonio Conte’s maniacal streak sent out onto the pitch to kick and grab and shithouse his way to a result that, without him, Spurs probably wouldn’t have come away with.

Romero’s ability to inspire an uncomfortable combination of unease, disdain and admiration is unparalleled.

And for a manager like Conte – a man on a mission to de-Spurs Spurs – the hair tug was a surreal, early-season dream sequence that perfectly manifested the unhinged soul of the trophy-winning Tottenham team he wants to construct.

The Premier League has its newest beguiling, horrifying, ensnaring supervillain. Spurs fans will be thanking their lucky stars he plays for them.