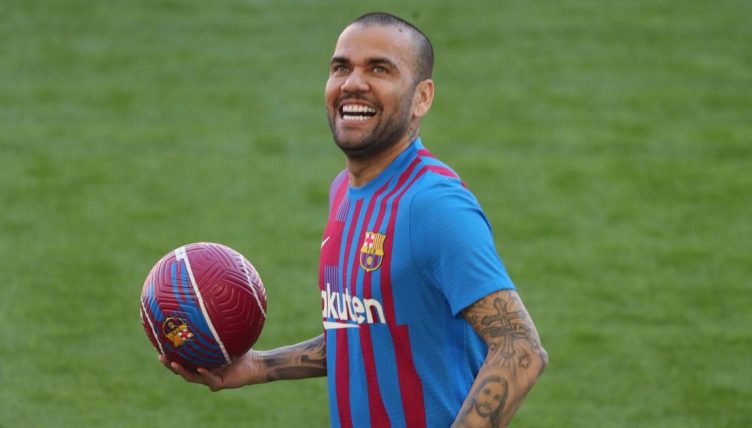 What does a football club need when it’s in the middle of its deepest period of decline this century?

The answer, usually, wouldn’t be the return of a once-brilliant but now slightly faded club legend in their late 30s who’s made more enemies than friends at the last club they played for and is looking for one final contract.

Wait, don’t go, this isn’t another article about Manchester United.

Instead, we are embarking on the intriguing tale of Barcelona and the homecoming of their prodigal son, 38-year-old Brazilian right-back-cum-all-fielder Dani Alves.

When Alves rolled back up in Catalunya in November 2021, many a brow was furrowed.

He was brilliant for them in his first spell, of that there is no doubt. He won trophy after trophy as a central part of the club’s most glorious era.

But times have changed. Barcelona were purportedly trying to cut their wage bill and bring in young players, to restructure and lay the foundations for a sustainable long-term future.

Yet here they were adding a big-name player who had been labelled “the worst signing of all time” by the Brazilian media while back at Sao Paulo and will be 40 in a little over a year’s time.

Except, when it comes to Alves, there’s something that we need to accept: with the Brazilian, reason goes flying through an open window; for him, crazy is the norm.

Could it work, then? On his second Barca debut in the Copa del Rey on Wednesday night, Alves produced a deliciously rich fruitcake of a display that suggested it just might. And in the first half, he conjured up football’s sweetest cherry to use as the topping: the effortless nutmeg.

Barca were playing Linares Deportivo, a third-tier team, but not a bad one. Linares sit atop their Group in Segunda B and are looking for promotion.

Alves hadn’t played a competitive club fixture since leaving Sao Paulo at the back end of August, so he might be expected to take a while to get going.

As we said, though, Alves isn’t really one for the expected. Fourteen minutes in, he received the ball in the Linares half and was being rapidly closed down by left-winger Fran Carnicer.

Ring rust? Ha! Alves slipped the ball delightfully through Carnicer’s legs like he was back playing on his dad’s farm in Bahia before laying it off to his old mate Sergio Busquets. Best of all, it looked so natural, so unforced.

Even at that early stage, though, it wasn’t Alves’ first positive intervention. In the fifth minute, he had delivered a whipped corner that big Uruguayan centre-half Ronald Araujo had almost nodded into the net.

Following the nutmeg, he carried on in the same vein. In the 18th minute, he played a part in creating a very presentable chance for Ilias Akhomach.

And after Deptortivo had taken the lead with a very well-worked goal, he was the one trying to get his team up the pitch and back on terms. Just before the break, he burst up the right with the alacrity of a man half his age and dinked a delightful ball to the back stick that Jordi Alba could well have converted.

In the second half, Alves’ influence continued to be felt. At times, he tucked in from his right-wing-back role to become almost a No.10.

And after Ousmane Dembele had produced the equaliser, it was Alves who dropped into a deep central midfield role to initiate the move that led to Ferran Jutgla’s Arjen Robben-esque winner.

By the end of the game, he had made seven accurate crosses, played five accurate long balls, created two big chances, won nine of his 14 duels and won three tackles.

Crazy? If signing Alves was crazy, then it was a good kind of crazy.

At his unveiling in November, standing on the Camp Nou pitch in a black velour designer dinner jacket and bare feet, Alves had said: “It’s time to change and you need to be positive. That’s my mission here.”

And he’s not wrong. Barca do need a bit of fun after all that’s gone on in recent months. He was forced to wait until the January window opened to show just how, but on Wednesday’s evidence, he’ll provide fun aplenty.

On so many levels, bringing him back made no sense at all. It was not a logical move, not a move that bank managers or stats-focused recruitment teams would have approved.

But then again, this is Alves. As he added on the pitch in November, what he brings can’t always be quantified: “I might have a bit less hair but some things never change; the spirit, the fight, the soul.”