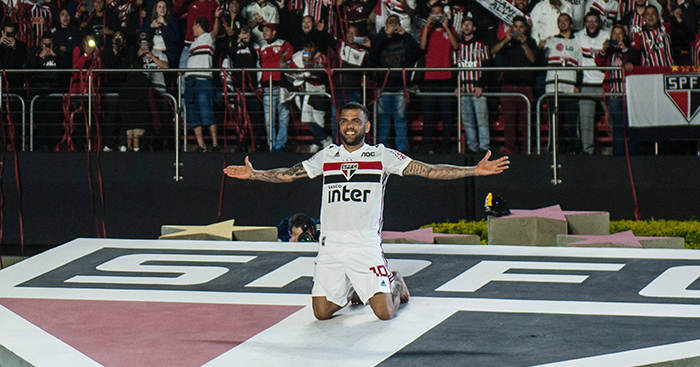 Walking up to the Morumbi stadium on Sunday morning, there was something in the air. Perhaps it was the warm sun and blue sky on the first real day of spring, but the sense of optimism was palpable.

São Paulo had lost the previous week, away to Vasco da Gama, but the crowds had not been put off. Almost 50,000 people packed in to see their team take on Grêmio in the Campeonato Brasileiro.

With the arrivals of ex-Atletico Madrid right-back Juanfran and, most importantly, Brazil’s Copa América winning captain Daniel Alves, things are looking up for the Tricolor Paulista.

And more than just good news for São Paulo fans, Alves’ signing is an indication that Brazilian football is in a stronger position than it has been for some time.

The Seleção player was no longer wanted at PSG, but he would have had no shortage of offers from the top tier of European club sides. Manchester City, Tottenham and Arsenal were all mooted, as was a return to Barcelona.

And if he had wanted a payday, the airport doors would surely have been flung wide open in the Middle East or China, given there was no transfer fee to stump up.

Yet, for a collection of reasons, Daniel chose to move to São Paulo.

At Alves’ presentation, which was attended by 44,000 fans and included club legends like Kaká and Luis Fabiano, as well as Raí and Diego Lugano, who are now Tricolor directors, that emotional affinity was placed front and centre. 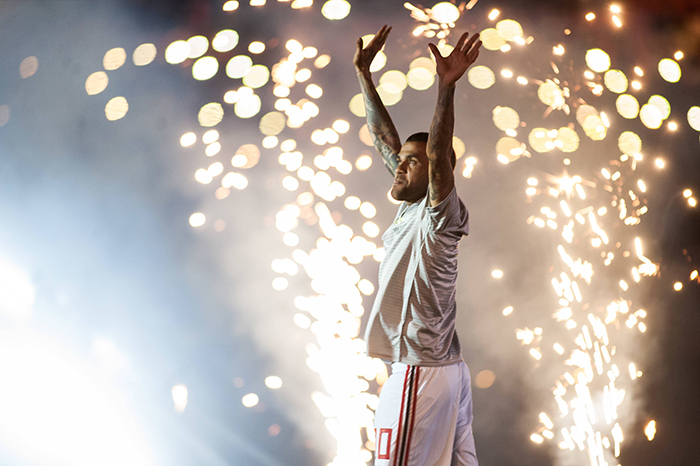 “Guys,” said Alves, taking the microphone in the middle of the Morumbi pitch, “I just want to say that São Paulo haven’t signed a player. São Paulo have signed a fan, just like you. I hope that together we can bring back the joy and make history with São Paulo.”

That he said “bring back” is significant. São Paulo have fallen on relatively hard times in recent years. There has been no new silverware to add to the cabinet since 2012 and no national league title since 2008. Alves has returned as Raí and Lugano try to build a squad strong enough to break that duck.

The presence of the pair of ex-players in the boardroom was also fundamental in the move, as Lugano explained to Folha de S.Paulo this week: “I went to France and planted the seed. That was three months before the Copa América. I told him to come and take on the biggest challenge of his life.”

The third reason is financial. São Paulo may not have offered him as much as a Champions League club, but his salary, at around £300,000 per month, is still significant.

That São Paulo are able to offer such a handsome figure is a reflection of the increased purchasing power of a few clubs at the top end of the Brazilian game.

There has been a flurry of repatriations in recent months. And some players who would normally be expected to make the move to Europe have instead chosen to continue playing in Brazil.

Palmeiras have brought in Ramires and Luiz Adriano to a squad that already boasted Paraguay international defender Gustavo Gomez and last year’s Brasileirão player of the year Dudu.

Then there is the length of the contract. São Paulo’s new No.10 – yes, you read that right – has signed on until December 2022, which could allow him to fulfil his dream of making it to the World Cup in Qatar.

He will be 39 by then, but if his recent performances are anything to go by, he still has enough left in the tank.

Sunday’s outing against Grêmio was his fourth start since his debut against Ceará a fortnight ago.

In the 1-0 win over Ceará, he scored the only goal, picking up the ball in the box before slotting it smartly past Diogo Silva.

But it was not one his usual forays forward from full-back that got him in that position.

As the simultaneous signing of Juanfran and the number on his back suggest, he is not being used in the position in which he has featured most regularly throughout his career. Instead he was deployed as the most advanced of a midfield three.

In the subsequent game against Athletico Paranaense, São Paulo won again, putting them within a point of leaders Flamengo and giving them hope that the first title of the Dani Alves era could come as soon as December, when the Brasileirão season ends.

The loss to Vasco last week, with the opening goal scored by a player in Talles Magno who is less than half the age of Alves, represented a blip.

And this Sunday, with their three main attacking options out injured, São Paulo were unable to break down a resilient Grêmio, drawing 0-0.

With Alves put to work as part of a front two, the home side showed a lot of nice touches through the middle but little penetration.

Juanfran looked off the pace in the second half too, which can probably be put down to the conditions. As Grêmio’s Seleção star Everton told reporters in the mixed zone, “It was bloody hot.”

The São Paulo fans are notoriously impatient, and towards the end there were widespread groans of discontent making their way around the ground.

Alves sounded equally frustrated after the game. “I know I can give a lot more than I am doing,” he admitted, “sometimes you can’t integrate quickly with your team-mates, but it’s a process that I am willing to go through.”

Still, Alves, who individually was cheered throughout, feels they can still make a tilt at the title. “We have to be constant in what we are doing. It is a marathon, not a sprint, and those who are consistent will be on the podium at the end.”

Cuca’s team still need time to gel and could certainly do with some of their attackers back. But hope for them and their fans remains.

Hopefully, too, more quality players will choose to come back to Brazil rather than go to China or the Middle East, and clubs here will be able to hang on to their youngsters a little longer.

“Brazilian football is on the up,” Alves concluded. “The tactical and technical level is improving. New managers are coming through and European coaches are coming here.