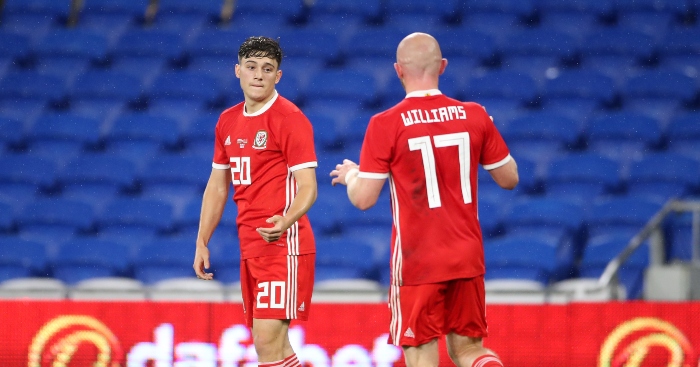 Things might not be rosy for Manchester United or Wales at the moment, but Daniel James isn’t letting any of that affect him.

Wales’ run of two wins in their last two games might suggest a positive picture, but that couldn’t be much further from the truth, with calls for manager Ryan Giggs to go after making very heavy weather of Azerbaijan at home in their last competitive game.

Similarly, Ole Gunnar Solskjaer’s long-term suitability for the Manchester United job is being called into question just one month after a 4-0 win over Chelsea on the opening weekend of the Premier League season. In both cases, things are bad. But in both cases, they could be even worse without Daniel James.

The former Swansea winger has been a rare shining light for United, scoring in three of their four Premier League games. To put that into context, only five United players scored more than three league goals across all of last season.

He has chipped in at international level too; despite doing little of note against Azerbaijan, he scored the winner in a friendly with Belarus to add to the vital strike against Slovakia earlier in the Euro 2020 qualifying campaign.

The effort against Belarus wasn’t an ordinary strike, either. It was as clean a curling strike as you’ll get, prompting onlookers to compare James with Arjen Robben for the way in which he cut inside and found the far corner.

Put simply, the freedom and creativity with which he put away the chance is out of sync with the clunkiness and misery on show across much of the football involving his club and international colleagues. In this case, it’s Wales who have set off for a picnic with a slab of unmeltable butter, only to also, by pure chance, pack the hottest knife known to man.

Comparisons with Robben aren’t too wide of the mark, but they ought to be made in relation to the version of the Dutchman who broke through for Groningen and PSV rather than the maestro we saw at Bayern Munich.

When we saw James in action for Swansea last season, there will be some who would have wondered whether the lack of pressure was key to his style and flair. Would the same be possible with everyone watching, or would that see him freeze?

We saw goals like his effort against Brentford in the FA Cup, a 70-yard run followed by a composed finish, and the one thing that stood out was the certainty. He knew from start to finish that the run would end in a goal, to the point that the entire process had the look of a man gearing up for the pre-planned celebration.

Surely he wouldn’t be able to keep this going when the spotlight became bigger. Surely the realisation of the significance of his actions would trip him up. Apparently not.

If we’ve learned one thing this season, though, it’s that James appears to love the limelight, even thrive in it.

Swansea fans will tell you he was nowhere near their best player last season, but the move to a more prominent club hasn’t caused him to hide away.

The manner in which he celebrated his equaliser against Crystal Palace drew criticism from some quarters, with some pointing to the fact that a point at home to a bottom-half team (as it looked like being at the time) is hardly an achievement,

However, after a dismal few years by United’s high standards, the sight of a player who understands the personal significance of scoring a late goal at Old Trafford should not be knocked. After all, United were hardly flying when Marcus Rashford drew them level against FC Midtjylland, and his celebration of that goal didn’t exactly set him back.

Thankfully for James, he’s shown no signs of letting that affect him, continuing to ride the confidence wave and ensuring each goal he scores is better than the last.

Perhaps, and this is just a theory, he needs the ego and the self-belief to be at his best, and any attempts to temper that will only make him stronger.

At times it has felt as though Daniel James has been sucking any suggestion of positive energy from club or country and keeping it all for himself. Maybe that’s actually a good thing.