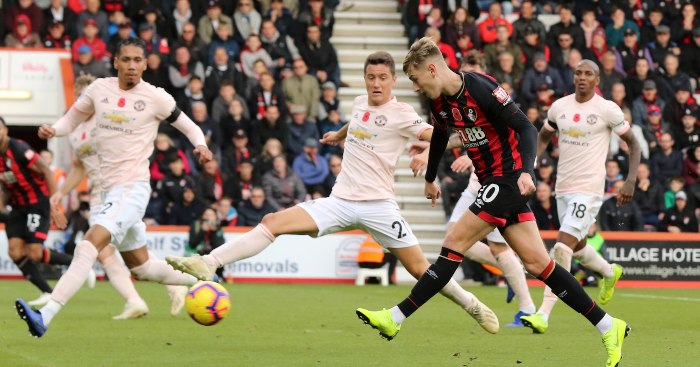 Manchester United‘s reported interest David Brooks is mainly being spoken about in terms of how it may impact Jadon Sancho’s future. But the focus should really be on what it means for Chris Smalling.

Having previously been linked with Liverpool, Brooks has been mooted as a potential United target, with some outlets suggesting he is viewed as an ‘alternative’ to Sancho amid Borussia Dortmund’s refusal to lower their asking price for the England winger.

A move for Brooks is likely to draw parallels with last summer’s signing of another Wales winger from the Championship in Daniel James, but the Bournemouth man has already shown there are some significant differences between the two players.

Whereas James’ reputation was built on ‘running really fast’ – a trait which showed its use in his promising start the former Swansea man made to his debut campaign at Old Trafford – Brooks is a player with far more subtleties to his game. If James prepares for a match like a 100 metre sprinter steeling himself to race out of the blocks, Brooks is more akin to a waiter donning his best dinner jacket ready to serve up treats to those around him.

The 23-year-old has a silk touch, pirouettes like a spinning top and possesses the vision to spot passes even his team-mates don’t truly expect to receive – as Smalling found out the hard way in United’s hard-fought 2-1 victory on the south coast in November 2018.

We’re not saying Smalling moved countries to rebuild his career just to avoid the embarrassment of facing Brooks once more in 2019-20, but there’s no smoke without fire.

He needn’t have worried regardless, as a serious ankle injury restricted Brooks’ campaign to nine appearances, all of which only came after football’s restart.

Smalling, meanwhile, has shone on loan at Roma, although it remains to be seen whether the two clubs can agree a permanent deal for the centre-back.

One thing’s for sure, if Manchester United do sign Brooks, it’s probably best for Smalling to save face and book his flights out of Manchester once more.