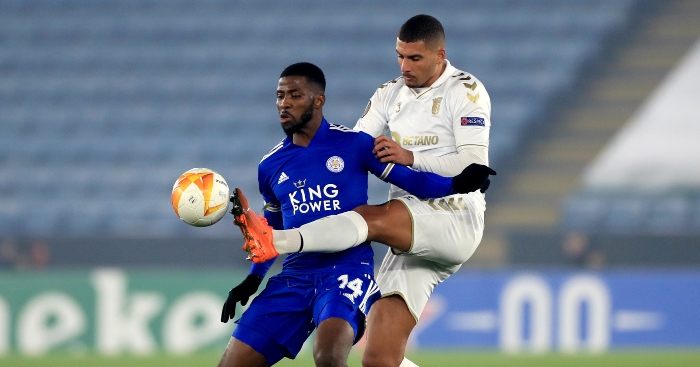 While looking for a solution to their defensive woes, Manchester United might have just unearthed the Paul Scholes of centre-backs.

It’s no secret that United’s defence has been in disarray this season, with Ole Gunnar Solskjaer’s side conceding 14 goals in their opening seven Premier League games.

Harry Maguire and Victor Lindelof have been scrutinised by fans and critics, while Phil Jones, Eric Bailly and Marcos Rojo are all on a first-name basis with the medical staff.

United have recently been heavily linked with a host of defenders from Dayot Upamecano to Kalidou Koulibaly, and the latest name is the relatively unknown David Carmo.

Despite only making his senior Braga debut in January, Carmo is already making a name for himself and has attracted a host of suitors following his impressive displays for the Portuguese side.

We could tell you that he’s won 81% of his aerial duels and has a 91% tackling success rate this season but where’s the fun in that?

Instead, we’re going to focus on another area of his game.

While most modern centre-backs are expected to be good with the ball at their feet, Carmo makes Gerard Pique look like Robert Huth.

The 21-year-old is clearly a frustrated No.10 who wants the ball at every single opportunity – not to boot it into touch, but to create a goal-scoring opportunity.

Despite looking like an old-fashioned defender, he can clearly play 40-yard diagonals with pinpoint accuracy and has even earned comparisons with Liverpool talisman Virgil van Dijk.

While Carmo will help address United’s defensive frailties, their forwards will also enjoy playing ahead of someone with such passing ability.

“It would have been a dream to play with someone like that,” Marcus Rashford said of Scholes, speaking on The Official Manchester United Podcast in April 2020.

“The biggest thing for me is the range of passing. Probably the closest thing to that was when Wazza (Wayne Rooney) was playing a bit deeper and it was just so enjoyable to play as a number nine in those games when he was playing in that position.

“Similar with Carras (Michael Carrick) as well, as soon as they get the ball they look forward and want to play forward, not only to feet but in behind a lot of the time. As a forward, that’s all you want. As long as someone is seeing the passes and trying to make them.”

The thought of Rashford running onto one of the centre-back’s Scholes-esque passes is enough to excite United fans and give nightmares to every single Premier League defender.