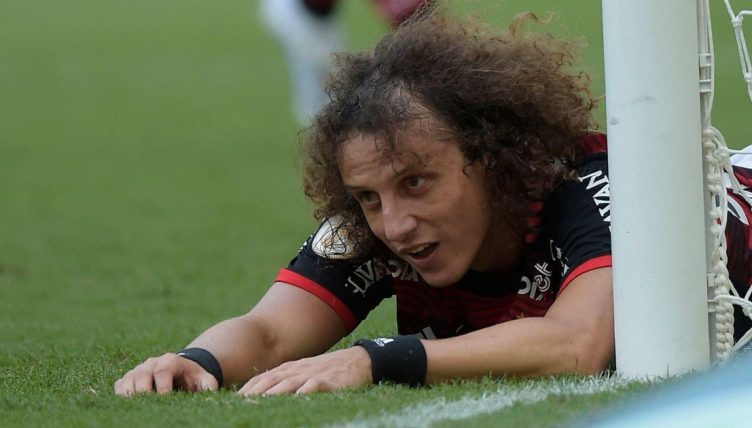 “I only wanted to be able to give joy to my people,” David Luiz garbled through the sobs, the heartbreak of a nation carved into his reddened face as he stood by the pitch at the Mineirao on July 8 2014.

He had just been the central figure in Brazil’s perfectly flawed footballing misery drama. That game. The 7-1. Where he had wanted to provide joy, he had instead inflicted anguish, the ultimate embarrassment at a home World Cup.

But with David Luiz, that is what you get. Or one side of the coin, at least. He is a man of no half measures, entirely unconstrained, it seems, by the expectations of society. David Luiz is elation and misery, joy and despair, brilliance and disaster, and absolutely nothing in between.

The former Chelsea and Arsenal man is football’s ultimate tragicomic anti-hero – and in Flamengo’s 1-0 derby loss to Rio de Janeiro rivals Botafogo on Sunday morning, he showed that he will never, ever change. Nor should he.

The game was being played in Brasilia’s Estadio Mane Garrincha, almost a thousand kilometres away from Rio. And with kick-off at 11, the second half took place under the searing midday sun.

Still, being a derby, it was wonderfully chaotic, a glorious mess of open space and disorganisation.

Flamengo, the best-supported club in Brazil and one of the country’s most successful in recent years, peppered the goal of their neighbours, who have struggled for several seasons but have new-found hope with the wealth of new owner John Textor, who also co-owns Crystal Palace.

Flamengo created and spurned chance after presentable chance. A Gabigol effort was ruled out for offside. A David Luiz was header tipped onto the post.

Then, predictably, came the counter. Botafogo’s bullish striker Erison got the ball just outside the area, stared into the whites of David Luiz’s eyes, knocked it to one side and then unleashed a shot from the bowels of hell. Flamengo, whose start to the season has been far from satisfying given their status, were staring down the barrel of another embarrassing defeat.

Mor chances at the other end followed. Another David Luiz header was saved, a Giorgian De Arrascaeta free-kick flew just over the bar.

Then, finally, the last-gasp opportunity. Eight minutes into injury time, Gabigol darted up the left and cut it back. And there he came, Flamengo’s magnificently coiffed saviour, charging the 90 yards up from the back despite the heat and exhaustion to get on the end of it and save the day.

Or at least that’s how he imagined it.

In real life, it was far better. Or at least far more entertaining for the neutral. Far more David Luiz, too. His left foot met the ball and it was gone. Literally gone. Off the television screen, out of the stadium, and quite possibly out beyond the reaches of the earth’s gravitational pull.

It was an earth-shattering miss – quite literally given how the stadium shook as the ball made its way through the ozone layer. And, to us, it was pure perfection, a genuinely immaculate footballing moment.

Fans of Flamengo’s rivals joked on Twitter that he had finally brought joy to the Brazilian people. He had to some of them. But to all of them and all of us, he’s brought and continues to bring something far more important: David Luiz is the king of footballing drama; he is the beautiful game’s most perfectly written character.

“Football is an art, like dancing is an art,” Arsene Wenger once said. “But only when it’s well done does it become an art.”

David Luiz is walking, talking, crying, shooting, shouting, stumbling, wildly gesticulating proof that only the first part of that is true. Football is art. But it can be art when it’s good and when it’s shit.

David Luiz’s shot was a f*cking disaster, a properly miserable attempt at scoring a goal. But if we view the story of the game as the script of a play, and David Luiz as both author and star actor, he had written an ending far better than the one where the ball flew perfectly into the top corner, far more dramatic and fundamentally human.

And that is the joy of David Luiz. He is deeply flawed and all the better for it.

This is Chelsea’s ‘PlayStation player’. This is the Arsenal defender who put in the worst display in Premier League history in 2020. This is the man who literally rolled on the floor laughing like a shithouse Sideshow Bob after getting Rafael sent off against Manchester United in 2013. This is the man who played with the composure and poise of a child lost in a supermarket for the entirety of that World Cup semi-final against Germany – the most important game of his life.

Even at Flamengo, for whom he signed after leaving Arsenal in 2021, he’s already been involved in a very high-profile moment of footballing slapstick – an extra-time rick in the 2021 Copa Libertadores final that cost his team the continental title – even if the fault was not principally his.

But he’s also provided a great deal of brilliance and dozens of moments of triumph over the course of his career. Four league titles, nine domestic cups, a Champions League and two Europa Leagues are testament to that.

Like any great fictional character, he is capable of inspiring disdain and rage and pity and joy and despair in equal measure. Flamengo fans are seeing that in sharp focus now.

And after his latest moment of extreme David Luiz-ness confirmed a second defeat in five league games so far this season, he fronted up to the cameras like he always does, speaking unapologetically of his belief that he’ll win another league title come the end of the campaign.

“At a big club it’ll always be like this,” he said. “There’s not a moment in the year that won’t be turbulent. For me, what matters is how it ends not how it begins.”

Any great dramatist would say the same.

Ranking every first-team signing Antonio Conte made at Chelsea