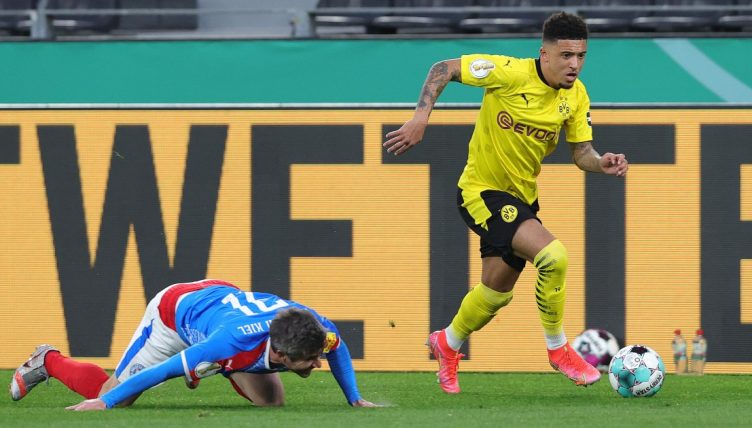 Jadon Sancho lives in the middle of a real life soap opera, a will-they-won’t-they saga focused on the possibility that he may, at some undetermined point, potentially cross £100million paths with Manchester United or Liverpool.

He is probably the most talked-about footballer in the English media who plays outside England, but most of the focus is on where he might play in the future rather than what he’s doing on the pitch now.

There were worries earlier this season that it was affecting him. His endless production of goals and assists tailed off, a little bit of that spark was missing.

But on Saturday, in his first full game after a month and a half out with a muscle tear, Sancho showed that despite a difficult season, he has lost none of his fear factor for defenders.

Borussia Dortmund played second-tier Holsten Kiel in the DfB Pokal semi-final, looking to inject a little life back into an ailing campaign.

In December, manager Lucien Favre was sacked and replaced with interim Edin Terzic. Dortmund are fifth in the Bundesliga with four games to go and at risk of missing out on Europe next term. They’re out of the Champions League, falling to Sancho’s old mates at Manchester City.

But in the domestic cup, Terzic’s men still have a chance at glory to end the season off in style. And it’s not a chance that Sancho wants to let slip, by the looks of it.

Just six minutes into the game at the Westfalenstadion, Sancho picked the ball up on the left and looked directly into the soul of his marker Fin Bartels. He saw pure terror, the dread at impending embarrassment filling Bartels’ heart. It is an emotion Sancho picks up on like a dog sniffs out a bone.

A drop of the left shoulder, a little shift of the weight from left to right to left and Bartels was already gone. The veteran midfielder tumbled back like a well-watered customer being kindly asked to leave a trebles bar by a burly bouncer at 3am.

A mere look from Sancho had been enough to floor him. And as Sancho skipped away and Bartels desperately tried to get to his feet, the tone had been set. Dortmund were in full control. With Bartels, Holstien Kiel’s hopes had tumbled too.

Ten minutes after Bartels’ mishap, the entire Holstein defence understandably backed off Sancho, wary of being on the receiving end of their own humiliating moment.

Sancho took advantage, fed Gio Reyna and the young American, all the way from Washington, made the Holstein fans break down and cry, finding the bottom corner from 18 yards.

That opened the floodgates. Just before half-time, Sancho’s young, equally talented mate Jude Bellingham scored Dortmund’s fifth after Reyna, Marco Reus and Thorgan Hazard had each found the net in the intervening half an hour.

Dortmund’s passage to the final was guaranteed without the need for goal-monster Erling Braut Haaland and without so much as breaking a sweat. In the second half, it was only a question of seeing the game through to the end.

The off-pitch reports and rumours and speculation and conjecture dominate the talk around Sancho. But all he really wants to do is sit defenders on their arses.

He will have the chance to do it again against RB Leipzig in the cup final on May 13, when he just might win the first major silverware of his career. If after all the chit-chat he is actually going to leave Dortmund this summer, it would be the right way to sign off.