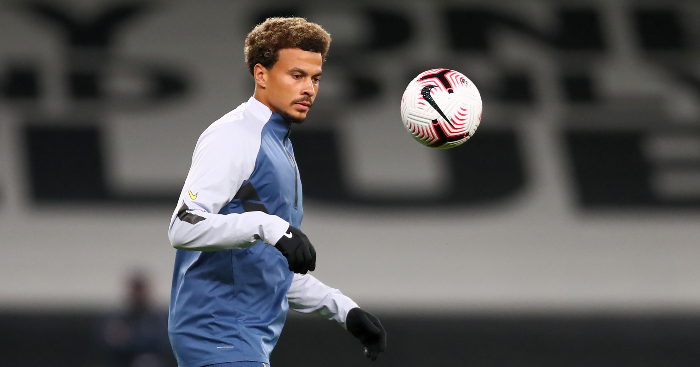 Dele Alli isn’t getting much time on the pitch with Tottenham this season. So it’s good that he performed all of his greatest hits within about 90 seconds on Thursday.

While it’s doubtful that anyone will cherish their memories of late 2020, poor Dele has had a particularly bad time of it.

Every weekend, the maverick midfielder has to look at a Spurs team sheet without his name on it. Only on Thursdays does he occasionally get a chance to kick a ball around.

He’s been subbed at half time twice already this campaign and appears to be something like Tottenham’s seventh-choice attacking player.

All of this has made us a bit worried about Dele, normally a reliable source of deadpan humour and petty fouls. We feared that Jose’s silent treatment might leave the playmaker with permanent scars.

But on the evidence of Spurs’ Europa League game against LASK, Dele’s not actually arsed about any of it.

On Thursday night, Mourinho sent him on with eight minutes remaining to play as a striker. And far from looking like a broken man, the super sub treated us to 90 seconds of pure Dele: the skill, the attitude, the ability to annoy a mild-mannered Polish referee without even trying.

Beyond clips of him talking about toothpaste application, we might not get to see a whole lot of Dele this year, so it’s worth cherishing cameos like this one.

He drinks a Schlager drink

Tottenham’s 3-3 draw with LASK had a bit of everything: Joe Hart taking us back to Euro 2016, Gareth Bale fucking up the simplest square pass to kill the game, and some vintage Dele Alli for people who preferred Spurs when they were fun — and not top of the league.

When the referee awarded Spurs a penalty in the 85th minute, the score was 2-2 and Dele, only on the pitch for a couple of minutes, hadn’t yet touched the ball.

So it was good to see how quickly he stepped up to take the spot-kick. He’d scored 4/4 career pens before Thursday, and being Mourinho’s scapegoat wasn’t enough to make him think he’d start missing now.

Truly, if Dele’s confidence is crippled, it really didn’t show.

Facing six-foot Alexander Schlager in the LASK goal, the midfielder took a brisk run-up and stroked it down the middle. As it crossed the line, Schlager was already hitting the floor to the right.

Ademola Lookman showed how not to dink a penalty for Fulham in November. Dele, however, didn’t attempt a Lookmanenka; instead he just laced it quite delicately, soft enough to control it, hard enough so Schlager couldn’t get up and return to the middle of the goal.

But if the goal was reassuring for Spurs fans, Alli’s reaction was even more so. There was none of that fist-clenching, vein-popping, pent-up-aggression-venting stuff; he just looked happy.

He even picked that moment to share a private joke with Serge Aurier.

Better still, Dele proved he’s still as much of a windup merchant as ever. A minute and 30 seconds after scoring his penalty, he got a yellow card for toe-poking the ball away from a LASK player attempting to take a free-kick.

It was his second touch of the ball.

Dele hasn’t started a Premier League match since the opening day of the season, which has prompted journalists to ask Jose Mourinho, in virtually every press conference, just how much he hates his midfielder.

Mourinho has been fairly diplomatic about it, but he’s also put out some clear warnings.

In one of the most recent Q&As, the manager emphasised that he didn’t have “personal issues” with Alli or anyone else in the squad.

But he did say that some of his benchwarmers were warming the bench better than others.

“A simple example is Ben Davies,” he said. “Against Chelsea, he had to play five minutes. Last season he would be playing 90, this season on the bench.

The problem is that, if Dele Alli had exactly five minutes left of his career, he wouldn’t spend it doggedly defending the left touchline.

He might, however, stroke a high-stakes penalty down the middle of the goal, have a chuckle about it, then pick up a silly booking while skipping down the tunnel towards his happy retirement.

It’s good to have Dele back, even if it’s only in 90-second bursts.