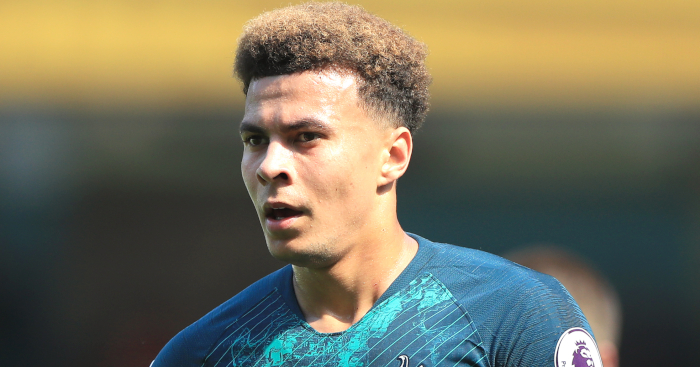 After the wall-to-wall drama of Tottenham’s Champions League quarter-final meeting with Manchester City, it was going to take a lot for the Premier League encounter between the two sides to deliver even a fraction of the entertainment.

An ‘after the lord mayor’s show’ feel seemed that bit more inevitable when Spurs announced a starting line-up which seemed to say to critics of the rearguard action in midweek, “Oh, you like defenders, do you? Well why not have all the defenders in the world?”

Sure enough, the change in personnel brought a tighter game with just one goal over the course of 90 minutes. However, the lower stakes for the visitors – coupled with a more advanced role – meant Dele Alli could play with the sort of freedom he hasn’t always been able to enjoy in a Spurs season which has been far from straightforward.

Alli spent more than half of the Champions League thriller in a deeper role, forced to put the team ahead of his own personal ambitions when Moussa Sissoko left the field through injury,

And, while he might not have taken up a second striker role in the third meeting with City in less than a fortnight, he did at least have the luxury of a back five providing greater protection behind him, along with the knowledge that, on the off-chance his shit didn’t come off, he could counter any criticism by pointing to a Champions League draw which contains Tottenham’s name and not City’s thanks in part to his own contribution on a busy night in the north-west.

Even so, if we were to speculate about creative play from the England midfielder before the game, we might have guessed he’d start pinging 70-yard through-balls to Son Heung-min and Lucas Moura, or perhaps attempt a bicycle kick or rabona when in the City area. We didn’t envisage him doing this, even when he had already nutmegged Bernardo Silva to set the tone.

The advent of video replays in football is not without its controversy, as the VAR discussion around Raheem Sterling’s disallowed goal in the 4-3 and Fernando Llorente’s actual clincher laid clear.

However, it also has the mystique-ruining effect of allowing you to witness a baffling piece of skill and being able to go back through it, frame by frame, to understand what the perpetrator was doing.

Yet in this case, we might see the component parts of Alli’s skill, but that doesn’t make it easier for us to figure out how he put them all together in a complete, mesmerising couple of seconds.

Celebrations of high-drama are one of the benefits for match-goers which TV viewers will never be able to experience in the same way, but they’re not the only one: while those watching a game in their living room can immediately relive skill like that shown by the Spurs man, there’s something to be said for sitting slack-jawed in a packed stadium as you and tens of thousands of others attempt – and fail – to process what has just gone on before your eyes.

The beauty of watching Alli’s skill back, of course, comes from the fact that each component part could be mistaken as the full action by someone watching for the first time.

The pirouette to dance away from Kevin de Bruyne and Bernardo Silva after receiving the first pass feels like samba football in its own right, with Spurs taking the negative cliché of being “on the beach” in mid-April and turning it into a positive.

As he turns away from the duo, his control is akin to a six-foot school kid playing one-v-one basketball against one of the shorter boys in his year by pressing the heel of one hand against his opponent’s forehead and dribbling into space with the other.

A split-second later, though, it’s as if he has brought in a clone of himself to collect a lay-off and drive at the net while the rival is still facing forward and flailing blindly in the hope that a ball he cannot see will enter his grasp on the basis that “it has to eventually, right?”.

Escaping the clutches of De Bruyne and Silva isn’t the easiest thing on its own, but the change of direction is something you do in pre-season friendlies, not away games against the reigning Premier League champions. Certainly not in the opening 35 minutes. And certainly not 20 yards into your own half when you’re the de facto last man.

The little flourish at the end, too, is the sort of thing which would normally be laudable in its own right. Alli is the playground king in the final minute of a three-hour end-of-summer holiday kickabout, recognising the dry heat will be enough to rush people into rash decisions and egging his opponents on, inviting them to kick him… but only if they can catch him. 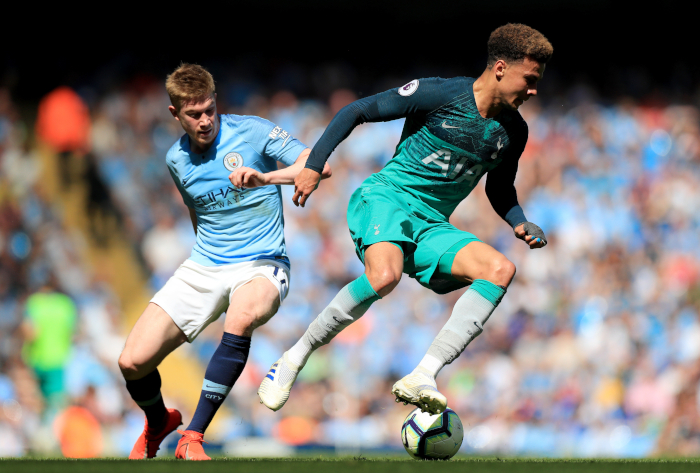 The excitement of Spurs 4-3 defeat at the Etihad – enough to send them through on away goals – came from how uncontrolled it all was.

Two goals apiece in the opening 11 minutes was a record for a reason: football has become so serious and so deliberate that this sort of chaos is not only rare, but deliberately avoided on those occasions where things go to plan.

This might well be why there was such a furore over Sterling’s disallowed hat-trick strike, too – it was the right decision according to the rules of the game, but for the previous 90 minutes it had felt like the usual rules weren’t in play, making the “correct” decision even more spiritually distant from that which had preceded it.

As Spurs closed out the game unconvincingly in midweek, their attempts at sensible football remained under the lens of the million mile per hour pace from earlier in the same evening, but the benefit of a three-day breather understandably gave both Mauricio Pochettino and Pep Guardiola time to develop a greater, almost blander focus which can often go missing in knockout football.

Within this environment, many of us will have been ready for the clock to tick past the 90 minute mark with nothing new to pique our interest even a fraction as much as Wednesday’s drama.

Alli’s skill was valuable in reminding us how much more fun football can be when we ignore its norms. While it didn’t touch the exact level of excitement of the Wednesday meeting, its unpredictable nature jolted us into remembering that yes, that really did happen.