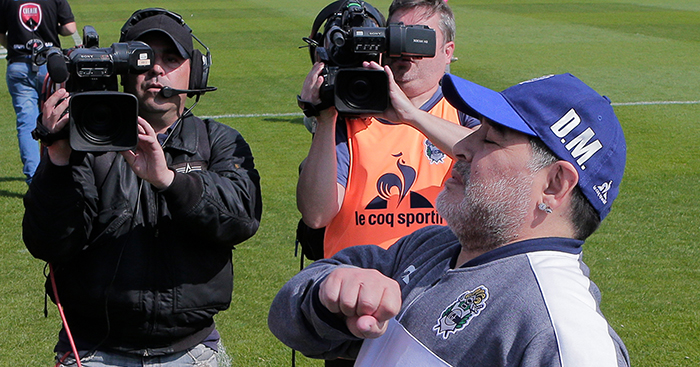 In early September, with just five games of the season gone, Club Gimnasia y Esgrima La Plata already knew they would need a miracle to stay up.

In any circumstances, four losses and a draw from your first five games of the campaign would be worrying. But usually some semblance of hope would remain.

Yet in Argentina, relegation is decided on the average of points over the last three seasons. With 57 points from their last 57 games, Gimnasia’s average was the worst in the league.

To avoid the drop, they would need to overtake the likes of Rosario Central, Colón and Banfield, who had each accrued at least 10 points more than Gimnasia over their last 57 games and had all started the season looking more competent than their seemingly doomed relegation rivals.

To make matters worse, Gimnasia would only have 18 more matches to overturn the deficit. With the Superliga Argentina trying to reduce the number of clubs in the top flight, they have reduced the length of the season; each team only plays each other once, with four going down and two coming up.

In such a situation, there is, of course, only one sensible answer: place your fate into the Hand(s) of God.

Fortunately for Gimnasia, those hands were not occupied. Diego Maradona had left his previous role with Mexican second division side Dorados de Sinaloa in June after failing to gain promotion. 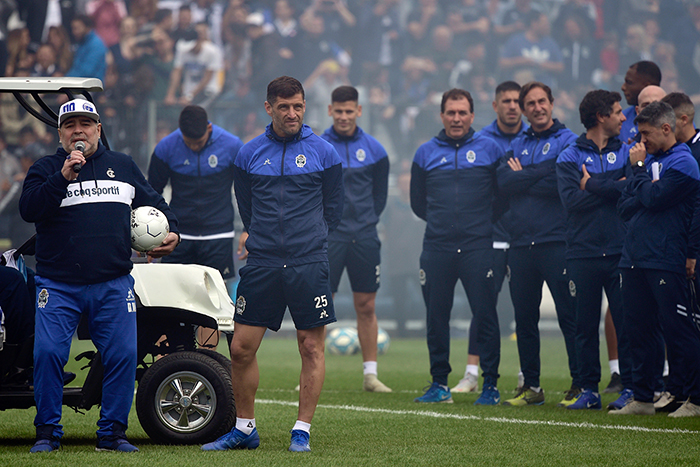 Los Triperos (literally, ‘the tripe handlers’, the club’s nickname dates back to many of their early fans working in a meat processing plant near the ground) made the offer and despite his well-documented health issues, El Diego accepted.

Maradona has returned to take charge of an Argentine club for the first time since he left Racing Club in 1995 and the nation is transfixed.

In the days leading up to his first game, fittingly against defending champions Racing, there was a section on the website of the sports daily Olé tracking Diego’s every move. True to form, there was plenty to track.

He was presented to 30,000 Gimnasia fans at their stadium, with special t-shirts printed, a newly composed Maradona song ringing from the stands and the presence of a man who had rushed to get a tattoo of Diego’s face on the side of his head.

At his presentation, Maradona announced he would not miss a training session with his new side, which he promptly followed by missing training the next day. In fairness, he was reportedly meeting the club president about additions to his coaching staff, but perhaps not best for the old image.

El Diez made more headlines when he joked, “I wanted to bring Usain Bolt in, but they wouldn’t sell him to me,” and attempted to get ex-Southampton bad boy Dani Osvaldo, who hung up his boots in 2016 to start a rock and roll career and was most recently seen on the Italian version of Strictly Come Dancing, to come out of retirement to join him.

There was also a bizarre, rambling press conference complete with tears, references to his doping ban after the 1994 World Cup and barely comprehensible talk of Nicolas Otamendi, Lionel Messi, Diego Simeone and Claudio Caniggia.

Maradona blamed his unintelligibility on the crying, but Olé later speculated that it was a result of sleeping pills, which, according to his daughter, “have a tremendous effect” on him when combined with alcohol.

Regardless of his scatter-brained first few days, most in Argentina are delighted to have him back. As El Diego’s former manager Cesar Luis Menotti said at a reunion of the team that he led to the 1979 World Youth Championship: “Diego doesn’t exist in a world that is not a pitch and a ball. That is his life and his dream.”

One of his team-mates from that campaign, Osvaldo Rinaldi, told Clarín: “Now we are all Gimnasia fans because the feeling we have for him is so great.”

Maradona has also been taking the need for a miracle quite literally. He called a priest in to bless the squad during the week and has banned the shirt numbers 13 and 17, which he believes bring negative energy.

And as he took his place on the bench on Sunday – in front of a full house, with fireworks, banners and a rocking El Bosque stadium – those watching the ‘Diego Cam’ (yes, really) being broadcast on not one but two national television channels (yes, really really), you could see him crossing himself incessantly and running an enormous, shiny silver cross through his fingers.

Unfortunately for him, whatever intervention there might have been was certainly not divine.

Central midfielder Franco Mussis said in the lead up to the game: “We’re going to try to be an intense team. That’s what Diego wants. We’ll give everything.”

And for a while, boosted by Maradona’s presence, they managed to – until a ridiculous error from the ‘keeper Alexis Martín Arias.

A header from Diego González looked easier to save than let in, but Arias managed to limply pat it through his own legs and over the line. It was, as they would put it in neighbouring Brazil, more ‘hand of lettuce’ than ‘hand of god’.

So embarrassed was Arias by his error that he insisted to the referee that the ball had not gone over the line despite clearly picking it up a yard inside his goal.

Gimnasia managed to pull level through a towering header from Matías García but were soon back at the dodgy defending, Manuel Ganini deflecting the ball into the path of Matías Zaracho, who poked home to put Racing back in the lead.

García had another huge chance at the end after being played in by Claudio Paul Caniggia lookalike Claudio Paul Spinelli (as the actual Caniggia watched from the stands), but he blasted over the bar and Maradona’s return was to end in defeat.

Deep down, we all want to be Claudio Paul Caniggia. What a man, if he was around during Roman times there'd be a naked sculpture of him in the Vatican right now. pic.twitter.com/ylabU9l6ry

“It hurts in my soul,” said Maradona after the game, “but this does not finish here.”

Nobody’s sure how much longer the Maradona circus will last – but there’s no doubt it’ll be entertaining while it does.