Simeone’s more than a sh*thouse: He ruined Man Utd with spirit they lack 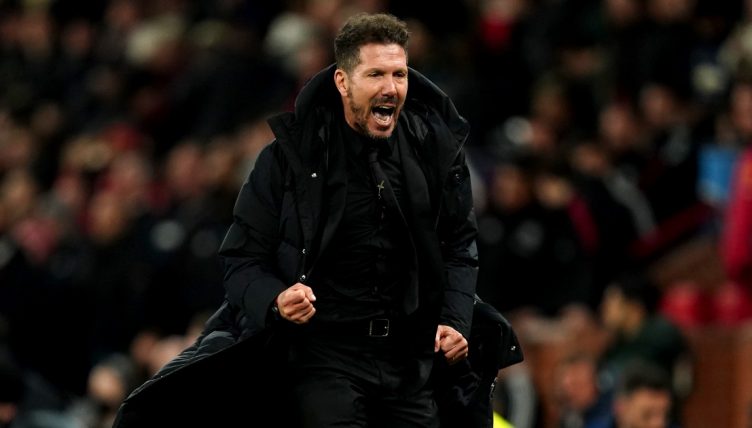 Think back to last Saturday evening in Madrid and it’s not difficult to picture Diego Simeone’s eyes narrowing as Cristiano Ronaldo produced a stunning individual display in Manchester United’s 3-2 victory over Tottenham.

Simeone must have felt a pang of sympathy for Antonio Conte, who concocted a solid gameplan as Spurs went to Old Trafford and created the better chances. Yet Conte’s side were ultimately bested by a freakish performance from a man who became football’s all-time top goalscorer that day.

Simeone knows how that feels. His Atletico have been knocked out of the Champions League by a side featuring Ronaldo in five of the last eight seasons – including two finals, and a comeback hat-trick for Juventus the last time they met in 2019.

More often than not it was Ronaldo making the difference – with a ridiculous 25 goals in 35 appearances against Atletico heading into this latest reunion.

The timing was typical, too.

The Portugal international had scored one goal in 10 appearances since the turn of the year, an immobile presence up top that was palpably frustrated that his powers appeared to finally be on the wane.

Rio Ferdinand might scoff at the idea, but there was plenty of evidence he was one of the problems at United – flying back to Portugal and missing the Manchester derby amid rumours of dressing room discontent just reinforced that argument.

Yet three days before United’s vital round-of-16 second-leg clash, Ronaldo rolled back the years. It wasn’t just the three expertly-taken goals against Spurs, but he was a menace throughout – he had eight shots, five of which were on target.

It looked inevitable that the European Cup’s all-time leading scorer would produce another one of those vintage knockout displays.

Especially given that this Atletico are less-than-vintage. Simeone’s side have meekly surrendered their La Liga title, now sitting 15 points behind leaders Real Madrid. The season’s objective has been recalibrated to a top-four finish since September.

Their famously resilient defence has been uncharacteristically slapdash this season too. They’ve already conceded 36 league goals – the most of any of Simeone’s 10 full seasons and twice as many as they conceded in 2015-16. There are still 10 games left to play.

With it written in the stars that the 37-year-old would prove the thorn in Simeone’s side one more time, how did the game actually work out?

A 1-0 victory for Atletico, with Ronaldo failing to register a single attempt. Not one. Nada. An xG of 0.00.

As Simeone jogged down the touchline and into the tunnel at the final whistle, pelted with missiles from the Old Trafford crowd, it was all too easy to focus on the shithousery.

There was plenty of that, for sure, with Atletico masters of running the clock down when they had a lead to protect. Ralf Rangnick had a fair point when he questioned how the referee had only given four minutes of injury time.

But that would be ignoring Simeone’s tactical chops and the fact that Atletico bettered their opponents for at least three of the four halves over the two legs.

Much the better side at the Wanda Metropolitano and desperately unlucky not to arrive at Old Trafford with a first-leg lead, El Cholo’s Colchoneros continued to perform in Manchester.

In truth, United were the better side in the first half, probing Atletico and asking questions of the defence – something they’d failed to do in the Spanish capital, Anthony Elanga’s moment of brilliance aside.

“We started the game exactly the way that we wanted to play it, energetically,” the ever-honest Rangnick told BT Sport after the match – it wasn’t excuse-making, but fair analysis.

“From the very first minute, we were in control of the game. We could have scored an early goal when we hit the crossbar and there were two or three other good moments in the first half.”

Yet Simeone’s side held firm under the pressure and gradually grew into the half.

They’d already had one goal ruled out for a fractional offside goal before Renan Lodi’s well-directed header put the finishing touch to a well-worked move – exactly the clinical edge that their opponents were lacking.

Exquisite touches from Joao Felix and Antoine Griezmann in the build-up demonstrated that there’s so much more to this side than pure muscle.

As soon as they took the lead, Simeone’s men played the game to perfection. Yes, there was the gamesmanship, but focusing on that is to ignore how well they shut out United when the ball was in play.

Paul Pogba, Marcus Rashford, Juan Mata and Edinson Cavani were all brought off the bench but they failed to make any kind of impact.

Every set-piece or dangerous cross was well-claimed by Jan Oblak or headed away by the dogged back three of Reinildo, Jose Maria Gimenez and Stefan Savic, who didn’t put a foot wrong between them all night.

Yes, Simeone’s Atletico are masters of the dark arts. But they’re also an exceptionally good football team; one that’s well worth their place in the last eight of Europe’s most prestigious competition. He’s turned them into one of football’s powerhouses.

Much of the post-match discussion between Rio Ferdinand and Paul Scholes was about how their former club have lacked an elite coach since Sir Alex Ferguson retired.

"You have to have a manager who strikes fear into players."

"These players here for the last two years have got away with murder."@rioferdy5, Paul Scholes, and Owen Hargreaves discuss what Man Utd need from their next manager 🔴#UCL pic.twitter.com/TlgW1ygfzg

Atletico had reached the European Cup quarter-final just once in 33 years before Simeone’s appointment. Since then, they’ve reached it six times in the last nine years. How United are crying out for a figure to make that kind of impact at Old Trafford.

Since Ferguson led the Red Devils to their last title in 2013, Simeone has led Atletico to two unlikely league titles. They’ve made it to the Champions League final as often as United have made it to the quarters in the last nine years.

“This team will dive into a swimming pool whether there is water in it or not,” Simeone told reporters after the win. Can Rangnick say the same?

United fans might not approve of his football – the bottles that rained down on the 51-year-old told us that much – but perhaps some of the resentment was at seeing a proven winner in action. It’s been a while since they’ve boasted one.

Domestically, this is as bad as Atletico have ever been in Simeone’s decade-long tenure, but they’re finding form at just the right time. At the sixth time of asking, they’ve made it past Ronaldo in the Champions League. Might this finally be their year?