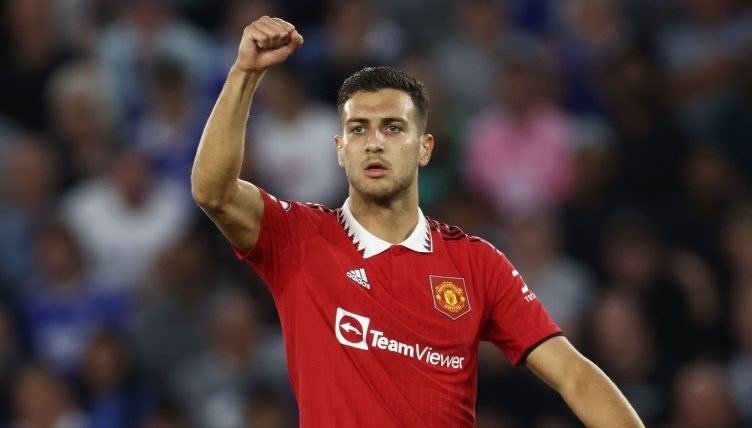 It was a moment to warm the hearts of Manchester United supporters.

In a match thoughtlessly scheduled to coincide with Transfer Deadline Day™ – which, with the pressure to get involved and its ultimately underwhelming nature, is surely the footballing equivalent of New Year’s Eve – United held a 1-0 lead at Leicester.

The narrow scoreline had, for the large part, been a mirage. Erik ten Hag’s side had looked in control and a sense was growing that Leicester could play until Bonfire Night without scoring.

But one-goal leads are more precarious in United’s hands than most. And when Harvey Barnes, who’d played most of the match as if stuck in treacle, suddenly burst towards the touchline, the away section at the King Power Stadium would’ve been forgiven for expecting the worst.

Diogo Dalot thought otherwise. Tracking his man, the United full-back waited until Barnes whipped in his cross before leaping feet first into its path without a semblance of concern for his own personal wellbeing. There was a lead to protect, after all.

And, as the ball bounced off Barnes for a goal-kick, Dalot saw his opponent visibly deflate. The battle had been won, the war would quickly follow suit. No wonder his celebrations can be best described as, err, exuberant.

As Dalot butted chests with Lisandro Martinez, playfought with Scott McTominay and earnt a congratulatory backslap from Raphael Varane, United’s renewed relish for the art of defending was almost tear-jerking.

They held onto their lead, securing a 1-0 victory that lifted them up to fifth in the embryonic Premier League table. Maybe, just maybe, United have turned a corner.

Dalot enjoyed that one 💪 pic.twitter.com/ZVXq47HfXj

It was also a moment of immense vindication from Dalot. After displacing Aaron Wan-Bisakka, a man who’s starting to collect cobwebs on the United bench, the Portugal international has been quietly improving for some time now.

Dalot won 100% of his aerial duels in the East Midlands on Thursday night, winning four tackles and making one crucial clearance.

His added defensive workload meant the 23-year-old couldn’t quite make his mark in the final third, although Dalot did provide a wonderful assist for Bruno Fernandes’ winner at Southampton last weekend.

And, with a late move for Sergino Dest failing to come to fruition, Dalot is starting to make the right-back berth his own.

“Us defenders, we don’t score goals too often, so these are our little goals during the 90 minutes, every time we stop the opponents coming into our goal and our box,” he told the official club website when asked about celebrating the prevention of goals. “I think this is the way it should be.

“This is the goal for us so we will celebrate and I think it’s something that came completely naturally from us. I hope it continues so we can give support to each other and I think it’s a good way to do it.”

He’s right. Goals have no meaning without defenders, just as life without death would be essentially meaningless. Blocks, tackles, marking and harrying are all part of football’s rich tapestry.

That’s why the defining image of the night was not Sancho’s goal but a whole-hearted block from an underrated player growing into the United shirt. Marvellous.