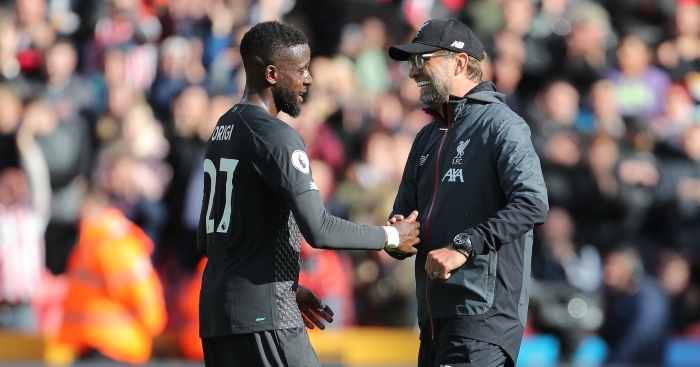 Liverpool might not have been at their best against Sheffield United, but Divock Origi showed at least one moment of magic to remind us these are very different times indeed.

Origi was still waiting for his first appearance of the season in late September, and would continue waiting for another two months. Now, though, he’s a bigger part of the Reds’ squad than anyone, not least himself, could have possibly imagined.

There was plenty of excitement around Origi’s signing in 2014, following some impressive displays at that year’s World Cup, but there was a general consensus that his loan move to Wolfsburg in 2017 would lead to an eventual permanent switch away from Anfield – especially when Mohamed Salah, Sadio Mané and Roberto Firmino contributed a combined 91 goals in his absence.

Certainly, no one could have expected him to not just return but return with a slew of massive goals.

His seven last season included league winners against Everton and Newcastle, a clincher in the Champions League final, and – of course – the double against Barcelona that got Jürgen Klopp’s men to that final in Madrid. Is it any wonder, then, that he had the confidence to do this against the Blades?

George Baldock, facing up to Origi in the right-back position, must feel in relative control. Origi has been forced wide, while there are defenders behind him and midfielders returning to cover on the off-chance the Belgian opts to cut inside.

It seems to be working, too. Shorn of any chance to bring the ball in from the wing. Okay, George, time to use your training. Remember all those sprint drills you did; this is your time to use them – time to get the afterburners on and track him down the line.

Cynics might look at trivial matters like Origi’s tame shot which failed to trouble Dean Henderson in the Sheffield United net. Sure, it was a lazy effort, dragged wide when a moment of calm would have surely produced better results.

However, Origi’s most famous moment in a red shirt, against the might of Barcelona, came when he put the concept of thinking ahead to one side and just let instinct take hold – can we really blame him for refusing to abandon that approach?

That’s not to say the flip-flap is entirely born of instinct, of course. Rather, it’s a move that requires years of practice, practice which probably isn’t nearly proportionate to what a player stands to gain from being able to pull it off.

At least, that’s true if the objective of a player is purely to beat his man one-on-one a couple of extra times every season and – if we’re being honest – likely lose a ball he could have kept hold of on at least one other occasion.

However, if the target is simply leaving an opposition player roundly embarrassed on just one occasion, at the expense of more or less anything else within his arsenal, Origi absolutely has it down.

When you beat a player in the manner he beats Baldock, you aren’t just doing it once, you’re letting them know this sort of thing could be on the cards again at any given moment. It’s his little way of telling the Sheffield United defender not to get too comfortable, either today or on any other day.

Even as Baldock gives up despairingly, he must know he’s given up ground which will be impossible to fully claim back.

It’s the same thing we saw back in 2014, before the move to Anfield and the loan back to Lille, when Origi took on South Korea for Belgium. In case you were tempted to call his antics at Bramall Lane a fluke, here’s evidence he has done it before.

Divock Origi’s moment of skill won’t have registered too highly in most round-ups of Liverpool’s victory – that honour mostly went to Dean Henderson’s error for Gini Wijnaldum’s winner, or the range of ‘spirited display from a promoted side’ clichés applied to the remainder of a tricky 90 minutes for the visitors.

However, it would be wrong of us to overlook the moment for what it symbolises.

When Origi made his debut under Brendan Rodgers, he was still blessed with the confidence and upward mobility that comes with a World Cup bow (and goal) as a teenager.

By the time he left on loan in 2017, a failure to become the absolute main man had seemingly dented his confidence in a manner which could have been terminal for other players.

Now, though, even if he is no longer the focal point of Liverpool’s attack, he seems to have got his swagger back. And that can only be a good thing.

Seven players who did nothing at Liverpool but shone after leaving