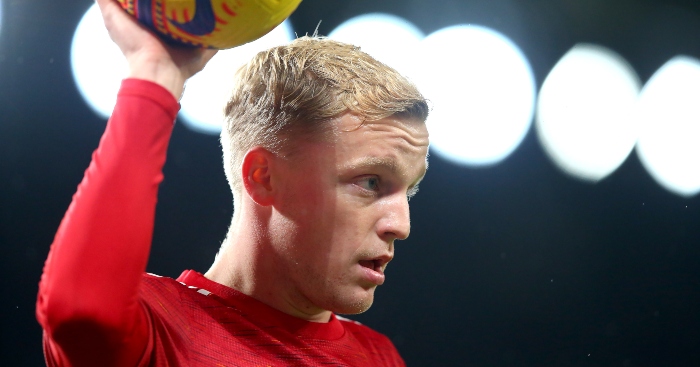 It’s fair to say that things haven’t gone to plan for Donny van de Beek since his £35million move to Manchester United in the summer.

Having starred for Ajax in the Eredivisie and the Champions League, Van de Beek was tipped to follow in the footsteps of United greats Jaap Stam and Ruud van Nistelrooy.

But despite showing glimpses of his talent, he has struggled to navigate the Bruno Fernandes-shaped obstacle at Old Trafford, starting just two Premier League games so far this season.

The 23-year-old’s lack of game time has raised alarm bells in his native Netherlands, with the likes of Marco van Basten, Ronald de Boer, Rafael van der Vaart and Louis van Gaal all questioning his decision to join United.

He has also been the subject of conversation throughout most of Ole Gunnar Solskjaer’s press conferences this season, leaving the manager with a bit of a headache.

“I’ve answered this question so many times,” Solskjaer said ahead of their game against Watford. “There’s so many examples of players needing a little bit of time, quality players.

“We have many examples ourselves and there are other clubs with examples. Sometimes it takes time. You don’t expect people who care for him to be quiet at times, especially when they want the best for them.

“Donny is going to play tomorrow. That’s another chance for him and, yes, I’ve spoken to him and reiterated and made him aware of how much we rate him. But he’ll play tomorrow and that’s a good chance again to kick on.”

As promised, Van de Beek was named in the starting line-up for the FA Cup third-round tie, and the midfielder lived up to his side of the bargain.

The stats show that no United player had a higher pass accuracy, completed more passes or won more tackles than the Netherlands international – but that still doesn’t do him justice.

In a game devoid of any real spark, Van de Beek released his pent-up frustration and displayed the footballing intelligence that helps him see things differently to any other player on the pitch.

Van de Beek found space in the penalty area and set Juan Mata through on goal with a delightful back-heeled pass, but the Spain international failed to complete the move, forcing a save from Daniel Bachmann.

The pair have clearly struck up a good understanding on the pitch and combined in a similar fashion for Mata’s goal against Brighton in September.

“It was a very clever assist. He’s a very clever player,” Mata told Sky Sports after the Brighton game. “I love playing with him because he finds pockets and spaces.

“He understands football in a way that I like, which is playing one-twos, passing and moving, and the goal was like that.”

Mata may not have found the back of the net on this occasion, but that shouldn’t take away from Van de Beek’s incredible vision and ingenuity.

Moments of genius like this will only lead to more questions over the midfielder’s lack of appearances, turning Solskjaer’s selection headache into a full-on migraine.

If this is a player that still needs more time to adapt to English football, we can’t wait to see how he performs when he’s gotten used to his new surroundings.