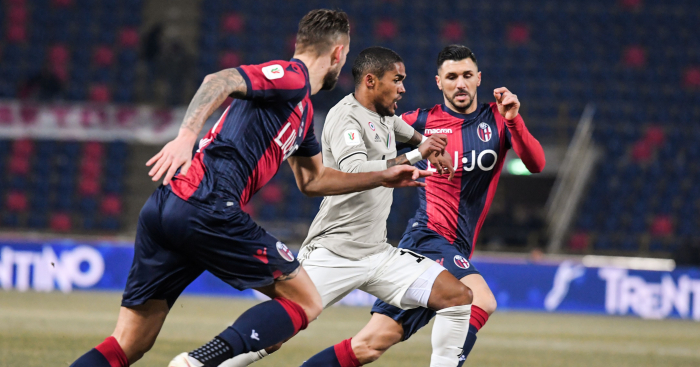 A few weeks ago, while at a Premier League game, I witnessed something for the first time.

A group of young fans, sat a couple of rows behind me, spent a good few minutes talking about certain players having “five star skills”.

It was perfectly natural to them, discussing real footballers as FIFA 19 characters and almost speaking of them as if this sort of skill should be expected of them purely because it’s something they’re capable of on a computer game. How silly, I thought.

Then I saw Douglas Costa in action for Juventus at Bologna in the Coppa Italia.

The Brazilian winger is the sort of player who the Proper Football Men™ of old might have written off as unsuited for English football but whose ability on the ball is the exact sort of thing which can make today’s defenders look incredibly stupid in both their words and their actions.

Now 28 years of age, the former Bayern Munich man continues to be linked with Premier League clubs, but now as the well-travelled star rather than the talented youngster who first came to Europe with Shakhtar Donetsk.

And while the younger incarnation embarrassing his peers could be put down to precociousness, when he does it now he’s just reminding those around him that maturity is something for those who have lost what once made them great. 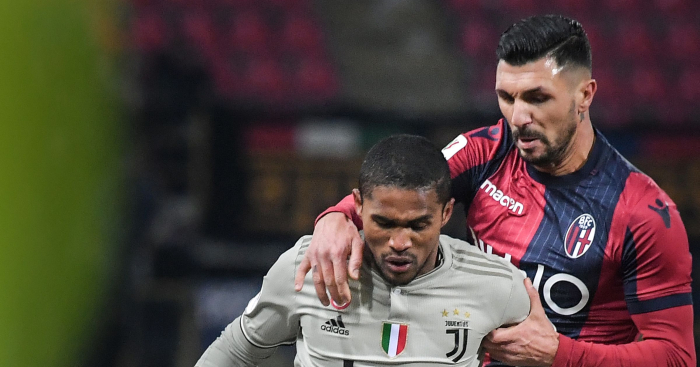 Roberto Soriano was two minutes and 15 seconds into his Bologna debut when he thought he could dispossess Costa. As someone five months the Italy international’s senior, the Juve man probably put it down to the audacity of youth.

That’s not to say he had any plans of showing sympathy to Soriano. Rather, he wanted to provide the 27-year-old the earliest possible message that, while he might have physically been on a football pitch in Bologna, he was in every other respect in Douglas Costa’s house.

Soriano’s first mistake is assuming that, just because Costa is moving away from the Bologna goal, he has him where he wants him. He’s at least smart enough to realise, after being comprehensively beaten, that he must conserve his energy to ultimately go again but with less enthusiasm and more rigidity.

It’s rare to see a man’s soul leave his body in slow motion, but at least Soriano had the luxury of knowing he’d be able to pick his back up off the touchline when he left the pitch at half-time. He certainly wasn’t going to attempt to recover it during the game, because he was well aware that would just give Costa the opportunity to snatch it back in the second period.

The midfielder even seems to keep nothing more than a watching brief as Costa drifts inside after releasing the ball, safe in the knowledge that if he’s going to try to recover some of his reputation, he’ll have to wait a lot longer than that.

Soriano was smarter than Héctor Bellerín back in 2015. Poor, naïve Héctor, thinking his recovery pace would do anything to help.

Costa beats Bellerín several times while in the process of figuring out how he’ll beat him once, then several more while actually doing it.

It was enough to send the defender into a years-long identity crisis, taking until 2018 to fully escape the psychological impact of the moment.

Ever wonder why we see Bellerín in a hat and sunglasses so often when he’s off the field of play? It’s a careful disguise, to ensure Douglas Costa can never again nutmeg his psyche.

Unlike Soriano, Bellerín has the advantage of facing Costa head on from the beginning, giving him time to prepare – in theory – for what will follow.

The problem, of course, is that preparing for every eventuality is to ignore the important fact that the winger is capable of doing things no one has done before, through sheer force of instinct.

It’s like reading book after book and essay after essay in preparation for an interview, only to be asked an abstract question to which there was never a right answer.

It’s like attempting to count to apple or catch air – your task is impossible, and you invariably look worse for taking any amount of time to figure that out.

The skill has a lasting impact, too. Against Benevento last season, Costa found himself up against Lorenzo Venuti, a man whose first mistake was doing his homework.

Sure, this might sound counter-intuitive, but researching your opponent is only useful if it leaves you with a method by which to counter their strengths.

Having said that, learning there’s nothing you can do might give you peace of mind, but it’s hardly going to benefit you on the pitch.

Venuti’s dangled leg is borne out of a desire to make sure someone else can be blamed for what follows, to ensure his direct opponent isn’t his direct problem.

The thing is, in doing this, he seems to forget the match is being televised and people will be able to see what he’s doing. It’s as transparent as these things come, but credit to him for thinking it might work.

Perhaps if the move hadn’t resulted in a goal for Costa then it wouldn’t get replayed over and over, but that’s not really a chance you can take when allowing a left-footed former team-mate of Arjen Robben to cut in from the right wing.

All this shows is that however you think you can counter Douglas Costa’s ability, you are wrong. Merely thinking there’s an answer at all is wrong.

If you get lucky and win the ball, it’s because something short-circuited on his end, not because you suddenly cracked the code.

The best way to avoid getting beaten by Douglas Costa is to enter the field of play after he has already been substituted. You can have that one for free.