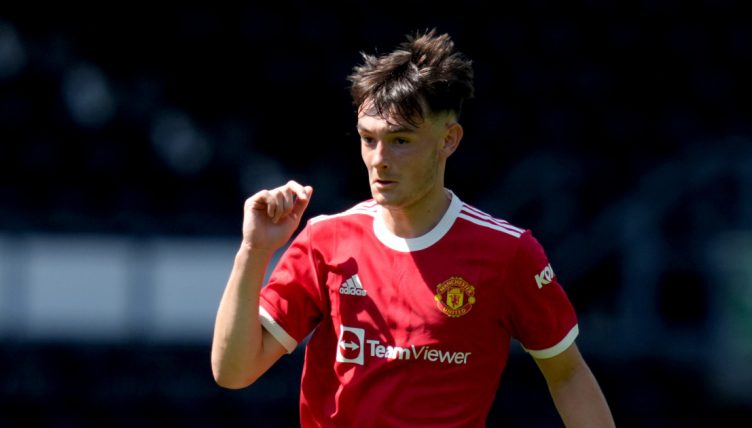 With the Scottish Cup fourth-round encounter between Dundee United and Kilmarnock coming to a close, it took a bit of Welsh magic to stop the tie from going to penalties.

Dylan Levitt, a Manchester United loanee, finally grabbed his first senior career goal to end the match in as emphatic a manner as just about anyone could manage.

Rolling and stumbling before firing low, it was an unconventional goal worthy of a young man whose early career has not followed the usual path expected of a youngster on Manchester United’s books.

But regardless, under the floodlights in West Scotland, he finally gave his career the lift-off it deserves.

It wasn’t a classic match.

Dundee United were battling away against Kilmarnock, who were relegated to the Championship last season and who sensed an upset was on the cards.

That translated into Killie having the best of the chances across the course of the match, with United facing a strong wall of defenders each time they forayed forward.

It took a combination of brilliance, luck, and determination from Levitt to weave through the cracks in the defence and land the tie’s killer blow.

The 21-year-old got the ball just outside the box in the 111th minute and the immediate and sudden change of pace he provided saw him split two Kilmarnock defenders in twain.

Now he had an extra yard of space but more importantly, he had adaptability.

It was a brilliant first goal, akin to a baby giraffe taking its first steps with the way in which he stumbled.

But just as they find a way to walk, Levitt found a way to score and breathe life into his career. (The move leading to the goal starts at 1:18 below).

Circumstances have conspired to mean it has not been an easy start for Levitt’s career.

The youngster came through the Manchester United academy as part of the same team as Ethan Laird, Teden Mengi, Tahith Chong and James Garner and looked more than their equal.

He was particularly lauded for his ability to play long, searching balls from deep or to provide the cute, creative stuff from midfield that unlocked stubborn defences.

His assist against Sunderland in the Premier Division 2 in 2019 at Old Trafford was a key example of what made him such an exciting youth prospect, sending a long spinning ball over the Sunderland defence and onto the United attacker from just over the half-way line.

The assist from Dylan Levitt though 🎯 pic.twitter.com/7pGDTcYc9x

He was involved in that Astana match as well when Ole Gunnar Solskjaer decided to field a team almost entirely made up of youngsters receiving their first-team debuts… and Lee Grant.

Levitt was even included in the Welsh national team squad, earning his first senior cap in September 2020.

Things looked set for Levitt to burst onto the scene and he left on loan, as did many in that group, in the summer of 2020.

He headed to Championship side Charlton, but things did not go to plan.

Making only five senior appearances in London, Levitt, primarily a technical player, visibly struggled to cope with the pace of the men’s game.

He looked a shadow of the supremely gifted player that had left Carrington, capable of pulling off a magnificent pass at a moments notice.

Give me more Dylan Levitt 🔥 pic.twitter.com/VHQNhlQPnU

Charlton and United agreed to terminate his loan early. The move had proved not to be the right fit, but it also damaged interest from other clubs and it looked as if a suitable club couldn’t be found in January.

Yet Levitt was not interested in moping around or resting on his laurels, falling out favour at United and for Wales.

He pushed for a move to Croatian first division side NK Istra, picking up more minutes in senior football and experiencing a new country.

It was a bold choice, and one most young players wouldn’t make, but it has stood him in good stead.

He earned his place in Wales’ Euro 2020 squad just as he had hoped he would. He leapt at the opportunity to join Dundee United last summer, with a potential role at the 2022 World Cup with Wales on the line.

The midfielder has now played around 12 games in Scotland, struggling for game time as he adapted to the physical nature of the league.

It has not been easy, but unlike at Charlton he has not been dismayed and the goal against Kilmarnock is a testament to how far he has come.

“That can be a breakthrough moment for him – coming away with the winning goal, when he’s at his lowest point,” Dundee United manager Tam Courts said after the match.

“He can go to the very top. When you see him at close quarters you understand he’s a player with unbelievable technical ability.

“In four or five years time we may look back and realise how lucky we were to see such a gifted player at Dundee United.

“When you understand his style and see what he does on the pitch you realise he’s a big player.”

Levitt has now proved himself as an adaptable, determined young player willing to go above and beyond to make it.

Whether that’s at Manchester United or not only the future can tell, but regardless he has earned his spot in the senior game and won’t be relinquishing it any time soon.

With Qatar 2022 in his thoughts, he has created a platform for himself to kick on and demonstrate his class.