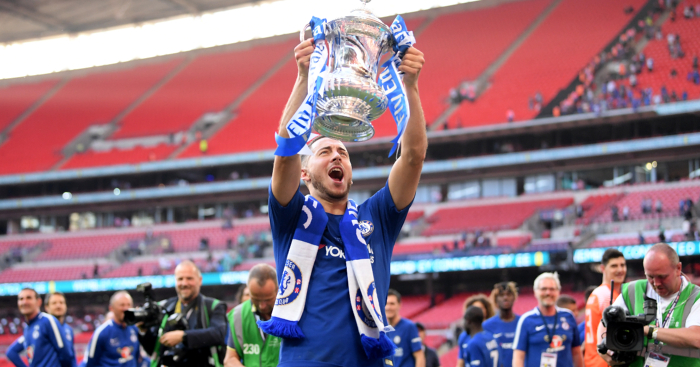 As much as we like to think of football as a permanently dramatic source of entertainment, the truth is very different.

Think about it for a second: would you trust yourself to pick a game at random as a means to sell the sport to a non-fan? Could you even guarantee that a classic game from the past would be as engrossing as you remember it in retrospect?

Those watching Dennis Bergkamp’s iconic turn and finish against Newcastle, for example, might lose interest in the midst of the 75-minute procession which followed the early strike, while someone roped into watching Tottenham v West Ham would surely have given up before the memorable late strikes from Pedro Obiang and Son Heung-min.

For those of us who know and love the game, however, part of the beauty comes from those single moments of breathtaking quality which make us forget about the monotony before and after.

And few have more of a knack for digging a diamond out from a mountain of sh*t than Eden Hazard.

It’s no secret that tighter games will often be decided by moments of brilliance or isolated mistakes, but the 2018 FA Cup final was a case of one facilitating the other.

Phil Jones may have ultimately dived in to concede a penalty, but it all stemmed from Hazard finding a gap which, for most others, wouldn’t have even been an option.

In taking that first touch, the Belgian wills a path to open up between him and David de Gea’s goal, while also perfectly measuring the weight of the touch and backing himself not only to get to the ball before a United defender, but to be in the clear when he does so.

If another player did the same thing, we might be tempted to put it down to luck, but Hazard has shown us time and time again that he doesn’t tend to leave anything to chance.

As someone who isn’t afraid to make use of his pace and low centre of gravity, Hazard could be forgiven for thinking he doesn’t need to act as puppet-master on top of all this, yet some of his best moments have come where he seems to develop a hold over his opponents without them even realising until it’s too late.

Take this goal against Sunderland in 2013: in playing a careful, almost slow-motion pass to Frank Lampard, he mentally pushes Phil Bardsley and Emanuele Giaccherini to one side as if throwing a ball for a puppy.

Within seconds, they have been tricked into turning their backs and almost giving him a guard of honour to move onto the return ball. By the time they realise what’s happened, he’s long gone.

Considering Hazard’s dribbling ability, it can be tempting to consider the immediate danger gone when he relinquishes the ball. And it might be, had he not consistently realised this himself and adapted.

His ability with ball at feet might sometimes be the key to unlock tighter games, but he has been just as purposeful when using team-mates as props and decoys for what you forgot was a one-track attacking approach until the ball was in the net.

It might not be a cup-winning moment like the penalty he won and converted against Manchester United, but Hazard’s goal to mathematically take Tottenham out of the 2015-16 title race was just as significant in demonstrating how he’s someone who defenders can’t afford to turn their backs on, either literally or metaphorically.

Indeed, given the significance in narrative terms, the quality of the goal is sometimes overlooked.

When Hazard releases the ball to Diego Costa, Kyle Walker and Eric Dier lose their intensity for a second, jogging back to leave their team-mates to deal with the Spaniard.

Yet, while they treat it as a new phase, Hazard sees it as a mere interruption of his own run at goal, stretching his legs to ensure he’s in space to receive the delicate return pass and producing a finish which, again, got a little lost in the gravity of the game and the violence that followed.

An underrated part of the equaliser against Spurs comes from the way he almost treats Mousa Dembélé like a chaise-longue, reclining against his compatriot as he opens up his body to curl home.

It might stem from the way he’s been forced to make the most of his own small frame, but Hazard has long shown his talent in using the bodies of others as well as his own.

The most recognisable example might be the time he wore Arsenal’s Francis Coquelin like a backpack, but for the most aesthetically pleasing you have to go back to his time in France with Lille.

This goal against Saint-Étienne is almost Disney-like in its manipulation of the henchmen in green, as Hazard escapes the attention of several opponents by letting each of them get close enough to hinder the others, while knowing when to break stride and change direction.

No solo goal is possible without solid footwork, but Hazard’s upper-body deserves the best supporting actor credit for the part it plays here.

It’s impossible to ignore the artistry, even if it comes directly at your expense: Hazard could break into your house and steal all your worldly possessions, and all you’ll be able to do is commend the skill with which he managed to pick the lock.

The attacker is the sort of player who you can’t set up to neutralise, as United found out when Ander Herrera’s man-marking job proved insufficient.

To save you a bit of time, I’ll tell you how it’s going to go. England will look solid and composed, creating some good chances, while Hazard will look quiet and almost bored by the whole thing.

It’ll all be under control, and then, suddenly, it won’t be. And when it happens, we won’t even be able to complain. Because this was always going to happen.