Ederson, John Stones and the funniest moment of the season so far 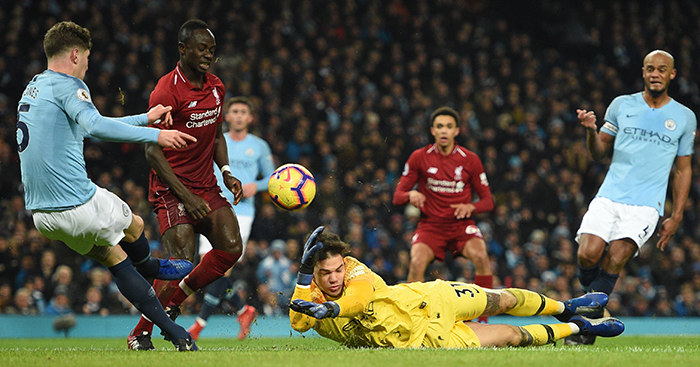 Manchester City vs Liverpool had all the hallmarks of a classic, including some hilarious last-ditch defending from the team in blue.

Although 2018 saw unprecedented transfer fees for goalkeepers, the Year of the Dog was also a vintage one for goalkeeping madness.

Liverpool’s Lorius Karius set the bar high in the Champions League final, throwing the ball straight at Karim Benzema before neatly wrapping up his own career with an even bigger howler.

That game has shaped Liverpool’s current season, having underlined the club’s need to spend big on Allison Becker.

But that wasn’t the end of it.

Seven weeks after the Karius horror show, France captain Hugo Lloris used the 2018 World Cup Final — where else? — to attempt a nutmeg for the first time.

Is Reusch using new chemicals or something?

Now that we’re a few days into 2019, we should really be putting all that silliness behind us.

But in the biggest game of the Premier League season so far — Man City vs Liverpool at the Etihad — City keeper Ederson Moraes almost scored an own goal to rival the efforts of Karius and Lloris.

To be clear, Ederson wasn’t exactly responsible for the near-miss, but the visual absurdity of the incident would have made it a blooper reel staple for years to come.

What’s more, had the ball actually gone in, Man City might have handed Liverpool their first Premier League title in the oddest manner imaginable.

Thought that the ball was Ederson’s head kicked off its shoulders by John Stones just then. Really did. #MCFCvLFC

The incident came in the 18th minute of the match.

Played in by Mohamed Salah, Sadio Mané came agonisingly close to opening the scoring for Liverpool, beating Ederson with his shot but only managing to hit the far post.

When the ball bounced back into the middle of the six-yard box, time seemed to stand still.

Different viewers of the game will have expected different outcomes.

Optimistic Liverpool fans might have expected Mané, quickly back up on his feet, to pounce on the rebound and put his team ahead.

Those of a nervous disposition might have foreseen a sickening clash of heads, with Stones and Ederson heading towards each other at a dangerous speed.

But those of us who sat through all eight episodes of All or Nothing: Manchester City knew this could only end one way.

What do you do when you win the prem?? Gatecrash a team mates round of golf, dressed as a Easter bunny, with a bottle of beer!!! John stones is amazing!!! pic.twitter.com/7gyV4cd0Hg

There are a few things you can learn from All or Nothing: Manchester City. That Pep Guardiola is an enthusiastic manager, yes. That his team talks require subtitles, yes. That, clearly, nobody in the team understands him, also yes.

But dig a little deeper and you’ll find some genuinely surprising information. That Ederson spends most of any given match day in his Y-fronts, for example. Or that John Stones owns a bunny costume.

If you’d known either of those things ahead of Man City vs Liverpool, you’d probably have foreseen what was about to happen when the ball found its way into the middle of the six-yard box.

The permanently underdressed Brazilian and the floppy-haired lad from Barnsley weren’t going to deal with this situation like two idiots in clothes that aren’t underpants or bunny costumes.

Instead, Stones was going to absolutely twat the ball into Ederson, upon which the violent impact off the goalkeeper would send the ball dangerously back towards the City goal. Stones would then throw himself into the net in order to keep it out. Simple.

When all those things happened, causing confusion, panic and delight in equal measure, the most thrilling moment of the season immediately became one of the funniest.

Liverpool had come a whisker away from a huge advantage — in both the match and the title race — but had been thwarted by a mixture of luck and goal-line technology.

Actually, ‘a whisker away’ is being generous. According to the Premier League, the ball was exactly 1.12 centimetres away from fully crossing the line.

That’s big for a whisker, but utterly, utterly negligible in relation to a size 5 football.

Now it’s impossible to say how the game might have turned out had the ball travelled that tiny extra distance — it was, after all, only the 18th minute — but a Liverpool lead would certainly have produced a different sort of game. Needless to say, the Reds’ chances of winning would have increased.

It’s interesting, then, to think that this bizarre moment of miscommunication could be one of the defining moments of the season.

If, come May, Liverpool have squandered their four-point lead, they may just rue the moment that John Stones twatted the ball — very hard, but not quite hard enough — into his bemused goalkeeper.