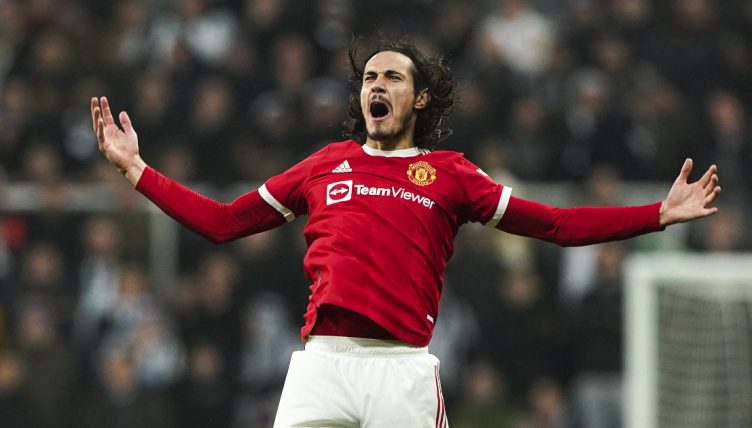 In a team full of homegrown players and containing one of the greatest of all time, it is Edinson Cavani who has captured the heart of most Manchester United fans.

It is easy to see why – and no, it’s not just his hair (although that really doesn’t hurt).

He is a warrior with the movement and grace of a ballerina. He is a fighter with a fiery passion only a Matador could have. And he is a hero, who arrives to save the day at just the right time.

Against Newcastle, Cavani rescued Manchester United once more when he fired home a rebound in the 71st minute.

His celebration was the standout feature, a battle cry of raw emotion that highlighted why United fans have come to adore him.

At the second time of asking he stretched to poke the ball past the Newcastle defence and save face for the Red Devils once more.

He wheeled away in celebration, not off to the corner flag but celebrating as he ran back towards the centre circle to restart the game and then try to win.

One two, three, four times he jumped and punched both fists towards the ground like a Year 6 schoolboy who had just scored the winner in the pupils v parents football match.

But there was nothing childlike about the roar he let out. Slamming his fist into the air he cried, “VAMOOOOS,” calling to attention all of the Red Army who responded in turn to their favourite general.

It was a cry that ordered everyone to regroup and go again, to desperately try and grab a winning goal they knew they did not deserve.

🗣 Cavani should start for Man Utd every week pic.twitter.com/jMPioWemqr

He threw his hands in the air, commanding his fellow crusaders to get back in their own half and re-start the match.

But it was also a cry to his adoring footsoldiers, those up in the criminally high Newcastle away end, who went into pandemonium for their beloved Greek-god-haired Spartacus.

It was a celebration that explained perfectly why the Old Trafford faithful took to Cavani almost instantly.

Not only is he different gravy on the pitch, not only does he have a unique style, but he cares.

Cavani is utterly tenacious. It does not matter that he cannot speak much English because his movement and his passion says more than words ever could.

So powerful was his footballing message that United fans heard him loud and clear through even their screens when they could not be at Old Trafford due to Covid.

They came up with songs for him in a matter of weeks from his debut.

“Give it, give it, give it to Edi Cavani” was followed by “I am in love, I can’t deny”. The latter is now a staple of United match days regardless of whether he is on the pitch.

The Manchester United fan base has come up with another song for Edinson Cavani.

But his legend only grew out of necessity as well. So many times in his 18 months at the club he has stepped up and dragged United forward on the battlefield.

His brace against Southampton, Fulham, Spurs and Villareal – he has repeatedly rescued and inspired United. There would have been even more occasions too if he hadn’t had to contend with injury.

But whilst those performances are a testament to his talent, they also reveal the scale of the issues Manchester United face.

The club once again needed Cavani to rescue them a point and were unable to find a way past a Newcastle side who rightly sit 19th. There is no excuse in regards to the talent of the players on the pitch now, with the exception of a lack of a true defensive midfielder.

Arguments that the tactics are to blame will also struggle to stand up now that Ralf Rangnick is in. Instead, it appears to be a purely psychological issue at the club that has infected it for years and only occasionally is beaten back.

In defence, the players seem acutely nervous. In midfield no one takes responsibility for the ball, preferring to shift it to the side when pressed in order to shirk any blame for losing it. In attack, there is a disconnect, with no combination of players seeming to click.

But Cavani’s roaring, warrior spirit is the antithesis of whatever it is that plagues Manchester United.

They must refuse to let him leave in January and bottle whatever it is that makes him fight lost battles.

And just for the fun of it, they should order everyone to grow out their hair like him. At this point, it’s probably worth a try.