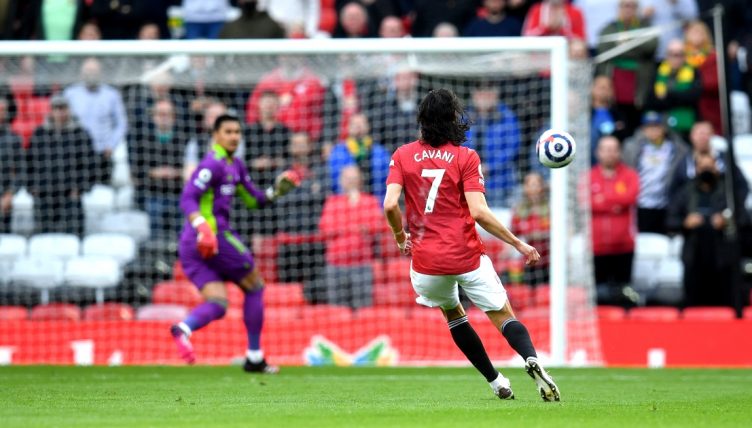 It is rare that a star striker is made to wait until their 26th appearance to play in front of their own fans, but that is the fate that befell Edinson Cavani after he joined Manchester United.

As time ticked by, and the Uruguayan continued to leave his contract at Old Trafford unextended, many fans started to doubt whether they would ever get the chance to see him in the flesh. But they need not have worried.

“I have been touched with how much the supporters have wanted me to stay, and I will give everything to bring them happiness and joy with my performances on the field,” he told the club’s official website just over a week ago after finally agreeing to a year’s extension.

“I’ve not yet been able to play in front of the Old Trafford crowd and that is something that I cannot wait to do.”

Throughout the 2020-21 campaign, Cavani has shown himself to be a reliable source of goals, solving United’s long-standing conundrum in the striking department and, in doing so, has comfortably eclipsed previous big-name signings. Angel Di Maria, Alexis Sanchez, Memphis Depay and Radamel Falcao were all signed in recent years with the hope of taking over as the club’s talisman, and they all failed.

Many thought the same fate awaited Cavani when he signed for United without a minute of pre-season training to his name and no game time for nearly nine months. But the 34-year-old has gradually left critics more and more red-faced.

On Tuesday night, he hit new heights of excellence, embarrassing Alphonse Areola and placing himself firmly in the running for the Premier League goal of the season. But perhaps more importantly, he announced himself as Old Trafford’s next great showman.

As David de Gea’s long pass trickled its way through to the striker, with or without the help of a Bruno Fernandes flick, the pragmatist gave way to the artiste, scoring his first Premier League goal from outside the penalty box. The logical thing for Cavani to do in that situation, over 40-yards from goal, would be to continue bursting into space and create a one-on-one chance.

Good Morning to everyone especially to Edinson Cavani.pic.twitter.com/LhHcQmIrUV

However, while performing for his new fans in the flesh for the first time, something so boring simply would not suffice. Instead, he had one look up, saw Areola backtracking desperately and chipped a perfect strike over the Frenchman’s head.

Memories of Eric Cantona against Sunderland, Wayne Rooney against Manchester City and Robin van Persie against Aston Villa were involuntarily conjured. The audacity!

United’s history is littered with these showmen. Players who lived to entertain their audience by attempting the outrageous. Yes, they were hard-working and technically excellent, but it has always been that extra element of razzle-dazzle that has lifted the Red Devils above the rest and led to so many dominant seasons.

If Tuesday night’s clash with Fulham was once again played in front of an empty stadium, there is every chance Cavani carries the ball further forward to create that one-on-one. But he saw his opportunity to give the returning fans a special memory, an opportunity to bring them “happiness and joy”, just as he promised he would.

The chipped finish had an xG of just 0.01. Had the metric existed at the time, Van Persie’s volley and Rooney’s overhead kick would no doubt have been rated similarly.

They may still have a Europa League final to come in a week’s time but for many, the countdown has already begun until next season’s Edi Cavani show gets underway in Stretford.