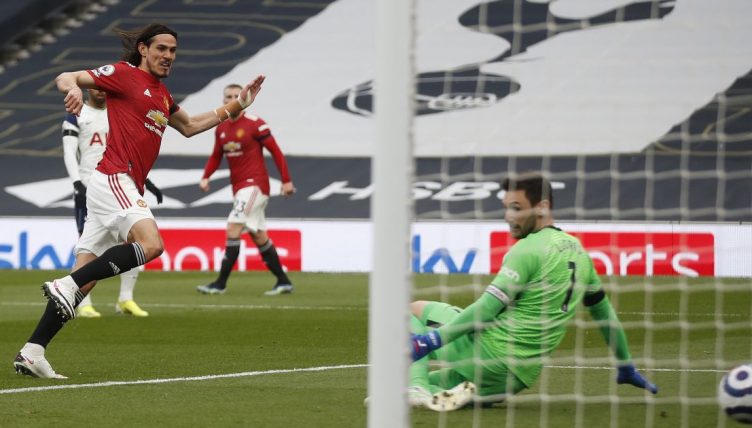 As the final whistle blew at the Tottenham Hotspur stadium, Manchester United‘s Edinson Cavani stood in the Spurs half, pumping his firmly clenched fists ahead of him and screaming a ‘vamos’ of joy into the cold north London air.

If he really wants away from England, if he truly “does not feel comfortable” like his father says, it was certainly a funny way of showing it. So, for that matter, was the 90-minute display of textbook, full-throttle centre-forward play that had preceded it.

Ole Gunnar Solskjaer said after the game that it’s “no secret we want to keep him.” And the more he performs like this, the more United will be forced to pull out all the stops to prevent him from leaving Old Trafford.

Cavani was the focal point of the United attack, dizzying Eric Dier with his movement off the shoulder and round the back.

There were plenty of examples of his intelligence, positional sense and mastery of the centre-forward art throughout the game. But the best one was without doubt the effort that would have opened the scoring in the first half, had it not been bizarrely ruled out for Scott McTominay’s non-existent foul on Heung-min Son.

After McTominay had flicked that stray hand at Son which would later cause Chris Kavanagh to chalk it off, the ball was played across to Fred, who fed Paul Pogba on the edge of the box.

As soon as Pogba got it, his Uruguayan team-mate came to life. A quick dart in the direction of Pogba caused Dier to look over his left shoulder and, thinking he had Cavani in his sights, the Spurs centre-half relaxed a little.

Cavani, though, was a step ahead. That first movement was merely a distraction and as Pogba paused for just a moment, Cavani darted behind Dier’s back, into the gap between defence and goalkeeper. Dier was wrong-footed, Pogba played it through and Cavani hammered the ball into the back of the net.

It was striking perfection. “That little movement in behind Eric Dier is brilliant from Cavani,” Gary Neville purred on co-commentary duties on Sky. It would turn out to be in vain.

Son has Spurs in the lead at the break, but all the talk will be whether he was fouled in the build-up to Cavani’s goal. Chris Kavanagh thinks so! 📺

No worry, though. Not for Cavani. That little run and switch might been the best bit of movement he produced in the game, but there was still plenty where it came from.

Tottenham went ahead not long before half-time, but with Cavani in and around their box and in the mood for vengence, the home side’s lead would not last long.

Just before the hour, the Uruguay international was there again. He peeled off Dier, who spent most of the afternoon wondering where the man he was supposed to be marking had gone, and received another through ball, this time from Fred.

Cavani’s shot might have been palmed away, but Fred had followed his pass into the box and tucked away the loose ball. As Solskajer said afterwards, “for Fred’s goal Edinson’s movement is the key.” It is a subject upon which the Norwegian is well qualified to opine.

Finally, 11 minutes before the end, Cavani got his own name on the scoresheet. This time the run was a simpler one, well-timed but straight down the middle.

Still, it was enough to evade Serge Aurier and Dier and, after some lovely build-up play and a perfect cross from Mason Greenwood, Cavani produced a Mark Hughes-eqsue dive to head the ball in and secure three points that have put United on course for second place in the league.

“It’s an absolutely unbelievable goal, it really is!” 🎙️

It was not only the intelligence of Cavani’s play, either. All afternoon he had run and harried and nibbled and pressed. His commitment was on full display when a coming together with Joe Rodon left the Spurs defender lying on the floor with a snarling Cavani stood over him demanding that he get to his feet.

Taken as a whole, it was the quintessential ‘kids at home who want to be strikers should be watching this’ display.

According to Gary Neville, United’s kids could learn from it too.

“There was a moment at the end where Tottenham had a throw-in with two minutes to go and [Cavani] was moving between the centre-back trying to stop the ball being thrown in. And he’s organising where Greenwood should be,” Neville said after the game.

“Mason Greenwood needs another year with Cavani up alongside him… Rashford needs another year of him. He’s been a really brilliant example. I was a little bit nervous about him coming here because of Falcao, Alexis Sanchez – which were showcase signings. This one’s been different.”

Each time he is on the pitch, the case to keep Cavani gets stronger and stronger. With his performances, he is not giving many indications that he will be Boca Juniors-bound too soon.

He is a professional, of course, and some might say he is doing his job while he is at United. But the way he throws himself into the games, both in his play and his celebrations, gives him the air of a man who’s perfectly fine right where he is.