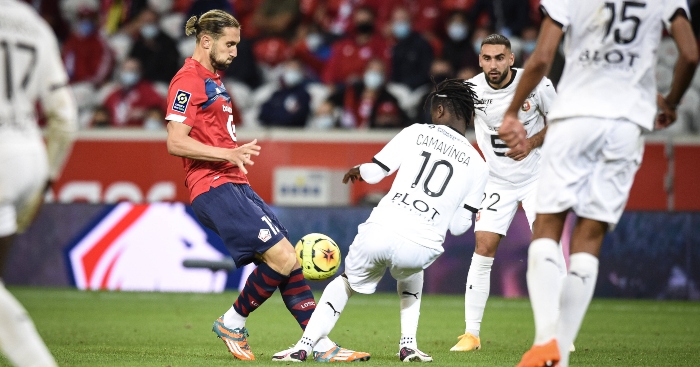 Eduardo Camavinga says he’s staying at Rennes despite interest from Real Madrid and Manchester United – but you suspect there’ll be plenty of clubs willing to put that commitment to the test before the end of the transfer window.

Camavinga has been linked with several top clubs around Europe, and in Rennes’ Ligue 1 season opener against Lille on Saturday he showed exactly why. Any of his suitors watching the game will have simultaneously been putting their heads in their hands and getting his agent back on the speed dials…just in case

Camavinga didn’t just show some great touches in the 1-1 draw, he carried the air of someone who knew he was the most important player on the pitch, and in a good way.

In this sequence, leading up to the corner from which Rennes score their goal, the midfielder’s touches are alien to anything you’d expect in a real football match and more at home in an advert for a sports brand.

This isn’t to say there’s no room for casual flicks and tricks on the pitch, but few players are able to make them look effortless and use them to progress play, as Camavinga does here.

The contact is almost out of sync with the movement, too, with a playground level of centre-stage flair blended with the kind of willingness to stay on his toes and look for the ball which speaks only to his professionalism. The behind-the-head control and the outside-of-the-boot flick tell opponents, “Yes, I’m better than you, but I had to work to be.”

Often, when you witness a young player opening his box of tricks on the field of play, the end result is pretty but ultimately ineffective. Here, though, not only does he help produce a corner, but he even gets his head to the delivery to lay on Damien Da Silva’s equaliser.

If that had been Camavinga’s only notable contribution, it would hardly have counted as a failure for a return to competitive action.

However, that was far from the limit of his willingness to lord it over a team which had finished just one point behind Rennes in the race for Champions League football last season.

After making mincemeat of a couple of opponents, Camavinga has to deal with the sight of Lille’s Renato Sanches rushing to meet him with an ‘I’m coming as fast as I can’ urgency.

But Camavinga is already prepared; indeed he’s two or three steps ahead, so much so that he’s able to ensure the place Sanches arrives at is of no use to him.

It’s the movement of the kind of player you’d expect to see at the ‘old’ Real Madrid, committing to an ethos of ripping apart all comers from any area of the pitch. It doesn’t matter if there are occasions when you get caught out, so long as you create enough of an aura with those high points to make sure of the kind of incremental gains which few notice until after the final whistle blows.

Madrid arguably don’t have such a player right now, and while their domestic dominance in June and July suggests they might not need one, Camavinga is showing himself to be the kind of talent you can’t really do without.

As the top end of European football edges further and further away from the second tier of continental football, it’s sometimes not enough to just be better than your rivals: sometimes you need to remind them, at every given opportunity, just how much better you are.

Eduardo Camavinga has already begun to show that blend of outrageous arrogance and the talent to back it up, to the point that the two might well go hand in hand.

We’ve got another decade and a half of this to look forward to and, quite frankly, we can’t wait.

‘He brings the ball to life’ – Seven quotes on Eduardo Camavinga

The top five Under-21 players in Europe for shots, dribbles, tackles etc