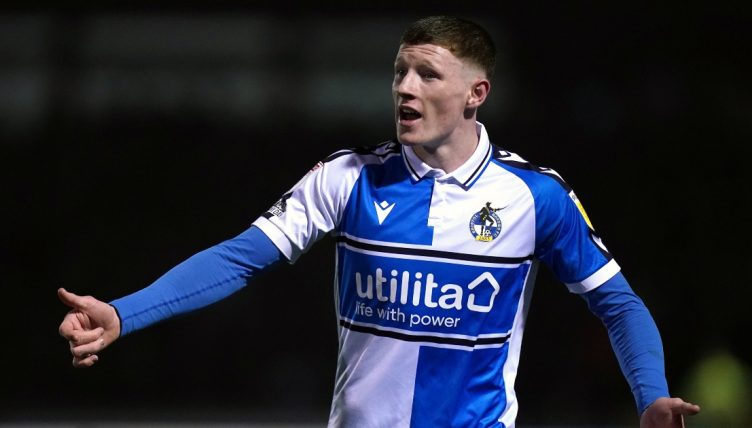 It was a comparison that, at first glance, made countless pairs of eyebrows across Newcastle require planning permission in a different postcode.

Former Newcastle United head scout Graham Carr was asked about the prospects of youngster Elliot Anderson and elected to compare him to club legend Peter Beardsley.

“He is classy,” Carr told the Daily Mail. “He receives the ball like Beardsley. He kills it and moves it all in one motion. That is a gift.

“He’s the best young player I have seen in a long time. Newcastle haven’t produced anyone like him, in terms of his technical gifts, probably all the way back to Gazza.”

“He plays with a swagger. Every time he gets the ball you know something is going to happen. He always wants to dribble and moves off quickly. He knows he’s good, but there’s no harm in that.”

No pressure then, Elliot. But his form during his current loan spell at Bristol Rovers has made a lot of people connected with Newcastle very excited – and started an international tug-of-war.

The 19-year-old has been involved with Scotland’s Under-21s this season having previously been capped at youth level, where he also appeared in a friendly for England Under-19s.

Anderson, who was born and raised in North Tyneside, is currently registered with the Scots, but England are confident of luring the midfielder to the Three Lions set-up.

One look at this opportunity Anderson created during a mundane draw at Sutton United is enough to understand why England would go to such lengths to secure his international future.

Rovers scrambled a point, boosting their promotion chances in a ridiculously competitive League Two, primarily because Anderson managed to make mincemeat out of his opponents.

After picking up the ball in his own half, the 19-year-old took advantage of Sutton’s Klopp-baiting lack of press and drifted towards the halfway line.

It’s here that two Sutton players put down their cutlery, rise from the dinner table and belatedly attempt to prise the ball from Anderson’s feet. He simply whips it between the pair and motors forward.

Josh Grant receives the pass and sensibly gives it straight back to Anderson. Demonstrating that League Two is way below his level, ability-wise, the youngster kills the ball and rolls it out of his feet in a split second – bringing to mind the great playmakers of World Cups from yesteryear.

After the cheekiest of give-and-goes with Barnsley loanee Luke Thomas, Anderson found himself through on goal with the opposition spluttering and puffing on their inhalers in his midst.

In the end, the angle was slightly too wide and Sutton goalkeeper Dean Bouzanis successfully narrowed the angle to prevent the shot.

But this didn’t stop Anderson from clipping a dangerous cross into the boss and watching the Sutton defence panic like a flock of seagulls that’s had their afternoon soiree interrupted by a BMX-riding youth.

The ball is cleared. Just. But Anderson has stamped his authority on the game.

He draws the foul that gifts Rovers their late equaliser from the penalty spot and has successfully justified Carr’s trumpeting of his ability.

ELLIOT ANDERSON IS AN ABSOLUTE BALLER 🚨🔥

Watch the video to see how the #newcastle loanee creates a chance out of nothing 👀#bristolrovers #brfc #nufc pic.twitter.com/nKXxScqVUF

Anderson’s impressive form at Rovers has seen boss Joey Barton, never one to be outdone in the hyperbolic stakes, draw comparisons to Diego Maradona due to his ability to slow down in the penalty area.

“I’ve been listening to Bill Shankly tapes a lot,” Barton said after Rovers’ win at Northampton in March 2022. “He talked a lot about a 19-year-old Diego Maradona and how he slows down in the penalty area, exactly like Elliot Anderson does. Such a talent.

“Elliot has been brilliant for us from the first day we brought him in. I would have paid to watch him tonight – he was that good.”

And Carr believes Anderson’s emergence will save Newcastle millions as they search for the creativity that’ll take them to the next level.

“They will spend millions on new players and a lot of academy lads will get lost in the system now – but not this boy,” Carr told the Daily Mail. “You can go out and sign as many young players as you want, you will be doing well to get any better than Elliot Anderson.

“This loan move looks like it has done him the world of good. He could get Bristol [Rovers] promoted this year. But it’s a waste of time sending him out again. He will be bordering on the first-team next season, and he should definitely be part of the squad.”

Eddie Howe has already confirmed he’ll take a closer look at Anderson in pre-season, while a number of Championship clubs are reportedly keen to take the 19-year-old on loan for the 2022-23 campaign.

The North East of England was once England’s hottest of footballing hotbeds, producing the likes of Jackie Milburn, Bobby Charlton, Paul Gascoigne, Chris Waddle and Beardsley over the years.

That conveyor belt of talent has slowed over recent decades. But Anderson already seems like a throwback to the glory days of Geordie-born creative geniuses.

So there’s every chance Carr and Barton will be proved right. Anderson is that good.