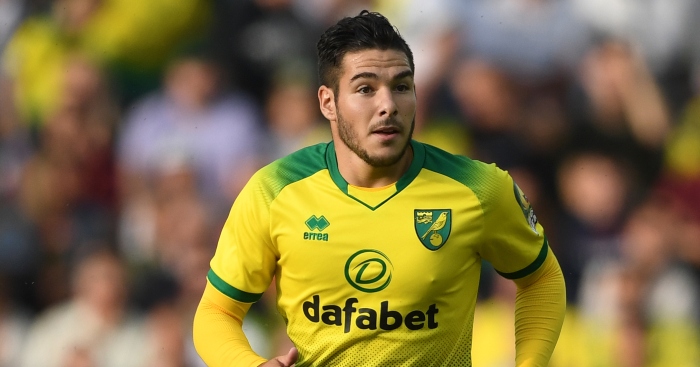 The number of missing players for Norwich City was meant to give them no chance against Manchester City. However, that wasn’t accounting for Emi Buendía surviving the injury crisis.

If the Canaries were going to get anything from the champions, football logic dictates that it would have been a smash-and-grab and/or the consequence of some desperate defensive play.

Buendía, signed ahead of the 2018-19 season after spending much of his career in the Spanish second tier, played a huge part in Norwich’s promotion but missed a chunk of the run-in after picking up a needless red card against QPR in April.

The challenge which earned him that ban might be considered an example of inexperience and poor decision-making, but there’s a different way of assessing the winger’s mentality: he’s always willing to do something because he instinctively thinks it’s the right thing to do in that moment, regardless of whether that’s actually the case, and tempering that instinct would temper the positive elements of his game.

Buendía set up two goals in the victory over City, sending in the corner from which Kenny McLean headed the opener and robbing Nicolás Otamendi to lay on Teemu Pukki’s clincher.

He even had a part to play in the goal in between, starting the move which led to Todd Cantwell tapping in Pukki’s pass at the far post by lifting the ball over a baffled Rodri and opening up space in front of him.

Back to the important stuff, though. Not the assists, not the meaningful touches in the build-up to goals, but rather the little moments that counted for little more than showing Manchester City who was in charge.

There was the backheel into his own area at 3-1, for example – the sort of thing a player might be criticised for if it ended up backfiring, so it’s handy he knew there was never any chance of things going wrong.

It’s a reminder that Pep Guardiola’s side need to earn the right to call someone else’s house their own home: he’s telling Norwich’s opponents that the Canaries aren’t suddenly going to operate differently just because they’re being pressured while defending their lead. Unlike the visitors themselves, of course, who panicked when things were not going to plan and allowed Buendía himself to embarrass Otamendi for the third Norwich goal.

He had set the tone a little earlier, though, by doing this…

Now, we know there will be some spoilsports out there who are keen to point out Buendía was flagged offside before embarrassing Raheem Sterling, as if that matters.

The first touch is impressive enough on its own, but once you get past that you see someone treating the ball like a marionette puppet, commanding it to dance back and forth as his own little way of demonstrating an unreal level of control.

He has looked at Sterling’s own achievements and recognised he needs to find a way to remind the England man there are still some things he can’t do better than everyone else: it’s like waltzing up to Pavarotti and hitting a perfect high note right in front of him, or pulling off a perfect limbo in front of the world’s best high-jumper.

Buendía dangles enough of an opportunity in front of Sterling to make him think he has failed by not being able to intercept, yet the truth is he never stood a chance. Indeed, he only felt like there was a chance because the Argentine incepted him so perfectly, beating him in multiple dimensions including those Sterling didn’t even realise existed.

An incredible display against the champions. pic.twitter.com/XuEGlfpcqz

Knowing Manchester City, there’s every chance this might still end up being a mere blip on the road to a comfortably-secured title. However, as Emi Buendía showed, there isn’t just one simple blueprint for stopping the champions in their tracks.

Norwich have already shot down logic en route to winning promotion to the Premier League – why shouldn’t they be able to do the same while they’re there?