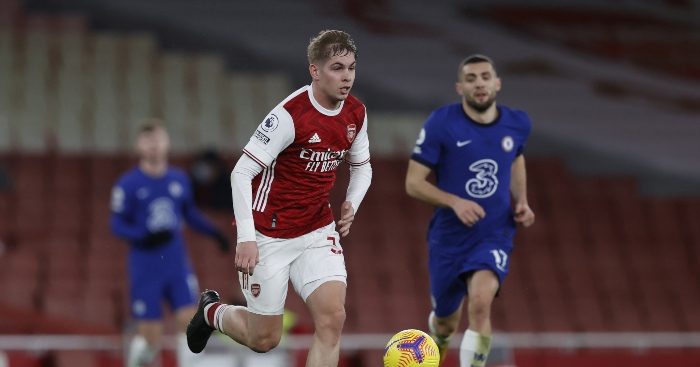 You know that clip from The Simpsons where football comes to Springfield in a clash between Portugal and Mexico? Until Boxing Day’s win over Chelsea, it’s a clip that summed up watching Arsenal this season.

“David Luiz passes to Granit Xhaka. Back to Luiz. Back to Xhaka. Xhaka holds it… holds it… holds it,” narrates Kent Brockman in this parallel universe, his eyelids growing heavy. For a while, it looked like it may lead to rioting among the fans too.

But Saturday night finally saw a display from Mikel Arteta’s men that not even Springfield’s most cynical journalist could, in all honesty, describe as boring.

There has been little to no creativity within the Arsenal ranks all season. Mesut Ozil has been outlawed; Willian, meanwhile, has failed dramatically.

Arteta kept faith with his established professionals for as long as possible, but whether it was Willian, Dani Ceballos or even Alexandre Lacazette playing as creator-in-chief, the result was invariably one of three possibilities: backwards, left or right. How about forwards? Not so much.

Enter Emile Smith Rowe. With one goal and two assists in three Europa League appearances this season, some Arsenal fans had long been calling for the 20-year-old to be given a chance in the Premier League.

The eagerness of youth proved too much for Frank Lampard’s somewhat complacent troops in this Boxing Day derby.

The trio stifled any creativity from their opponent’s midfield and drove the Gunners forward in a way that was reminiscent of days when people used to compliment Arsenal. Crazy times.

Smith Rowe was at the centre of it all. He was sharp, shifting the ball on in tight areas when it needed to be. He was positive, running at the Blues’ backline and invariably picking the right pass. And he passed it forward. He actually passed it forward.

Arsenal fans this season have been predominantly left to look on enviously at other clubs. Like kids who did not receive the toy they wanted for Christmas, they were left staring longingly at Bruno Fernandes transforming Manchester United and Aston Villa excitedly bragging about Jack Grealish.

But now it looks like Arsenal may finally have their own No.10 to shout about. In the clash with Chelsea, Smith Rowe emerged with a pass accuracy of 81.5%, created two chances, won three of his four duels, made one interception, provided one assist and, crucially, embarrassed N’Golo Kante with a cheeky nutmeg.

Now the challenge passes to the fans and Arteta. It is true that nobody gets as carried away about anything quite as quickly as football supporters do about an exciting young prospect at their club (and we count ourselves among those ranks).

Smith Rowe will have bad games. He is only 20, so it is pretty much a guarantee. What is crucial now is that Arsenal fans continue to back him when he does.

For Arteta, the task at hand is to maintain the confidence that is no doubt flowing through the youngster after the weekend. Dropping him against Brighton will do him no favours, nor will continuing to play him once his form inevitably dips for a few games.

Ahead of Tuesday night’s clash with the Seagulls, however, Arsenal fans can for now just revel in the excitement of once again watching a side that seems to know how to attack.