Dominic Calvert-Lewin is a trendy young guy who plays football in a weirdly old-fashioned way and gets booked a lot. He could be brilliant.

It took Dominic Calvert-Lewin just 26 minutes to open his account with England, continuing the phenomenal early-season form that has seen him score nine goals in six games for Everton.

Jack Grealish whipped in a smart cross from the right-hand side, and when Calvert-Lewin leapt off the ground, the outcome was predictable.

The Everton striker offers something for everyone. He can obviously handle himself, but he also wears eccentric clothes in his spare time, giving him kudos amongst sportos, motorheads, geeks, sluts, bloods, wastoids, dweebies and dickheads.

Will he force his way into Gareth Southgate’s first-choice XI? Possibly not yet, but this hour-long masterclass will have done his chances no harm.

He even worked well in tandem with Danny Ings, another England rookie who can’t stop scoring at the moment. 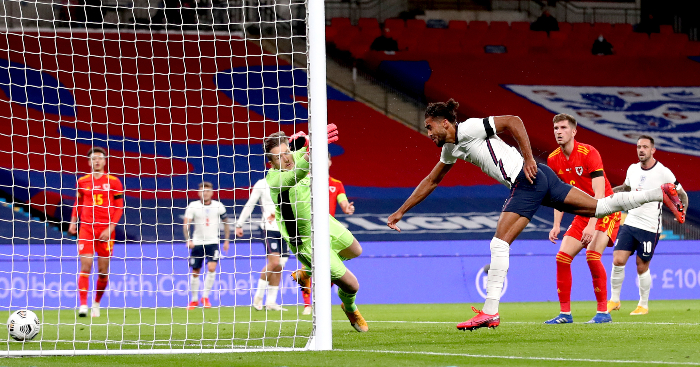 What’s more, there’s something likably anachronistic about Calvert-Lewin’s appearance — and instant success — in this England side.

He’s not exactly a modern forward. He’s big, he’s aggressive, and he wears his shorts like it’s 1975.

In truth, it’s been exactly 10 years since somebody this retro made their way into the England team.

On October 12, 2010, Kevin Davies made his own eagerly awaited debut for England at the age of 33.

It was a remarkable story for the Bolton striker, who had been slogging it out in the Premier League since the 1997-98 season, hitting double figures only once.

You had to respect the debutant for his perseverance, even if you weren’t especially excited to watch him play.

On the big night, Fabio Capello gave him a little over 20 minutes to do his thing. But to England’s misfortune, Davies’ thing — elbows, clattering around and all that — wasn’t quite enough. Despite a few well-won headers, the striker couldn’t force a breakthrough in a 0-0 draw with Montenegro.

Nor did he ever add to that solitary cap.

At just 23, Dominic Calvert-Lewin is obviously a better footballer than Kevin Davies. He’s scoring goals at a rate Davies could never dream of, and there’s more to his game than sheer physicality.

That being said, the parallels are plain to see.

They might be in different leagues, but Davies and Calvert-Lewin are cut from the same big, old-fashioned English cloth.

Over the 2019-20 season, Calvert-Lewin committed more fouls (57) than any forward except Crystal Palace’s Jordan Ayew.

He was also second for yellow cards (9), one behind Bournemouth’s Callum Wilson.

This is Davies territory.

The former Bolton man committed, by a frankly huge distance, the most fouls of any forward since the Premier League started tallying them in 2006. And he’s behind only Wayne Rooney for yellow cards.

We’ve been told time and again that this aggression gets punished in the international game. But does Calvert-Lewin have the nous to pull it off?

When Davies embarked upon his belated, 21-minute-long England career, few pundits were quite as sceptical as the Daily Mail’s Martin Samuel.

Although he praised Davies for his unique qualities, the journalist cast serious doubt over the Bolton man’s suitability for the biggest stage:

Davies has a combative style that typifies the aggression of many smaller Premier League clubs. He takes plenty and gives plenty back. So what is there to cry about?

Perhaps the passing of the idea that international football is about something more. That, whatever the limitations of our domestic game, at international level we step forward from the sheer physicality of our league and aspire to a more sophisticated style. Perhaps what disappoints the most is a rejection of the need for change.

Samuel was hardly being contrarian though.

After England’s dismal showing at the 2010 World Cup (and Spain’s triumph), there was a clear appetite, among both fans and pundits, for the national team to adopt a more technical, possession-based style, largely free of target men and box-to-box midfielders.

Gary Lineker wrote for the BBC that Fabio Capello “has to reassess his tactics, because the 4-4-2 formation he employed looked antiquated compared to other teams.”

Meanwhile Sir Trevor Brooking, at the time the FA’s Director of Football Development, lamented the superiority of other nations’ youth programmes that had, in his opinion, contributed to their success at senior level.

“Everyone else is making progress,” Brooking said.

So while the call-up for Kevin Davies was a victory for people who were either sentimental, from Bolton or simply old, it didn’t represent much in the way of “progress”.

In truth, it feels better than that.

Because why would you want progress or “a more sophisticated style” when you can have a long-legged, quintessentially English forward who scores a hat-trick every other game?

In 2010, we lusted after Xavi and Iniesta because their short passing style seemed to offer the surest guarantee of success. We started to believe there was no other way, even if we didn’t find possession football inherently satisfying.

And there was some logic to that thinking.

After all, teaching children to play passing triangles is more effective than teaching them to be tall. Trevor Brooking knows what he’s talking about, and, to be sure, there have been momentous improvements in the technique of English youngsters over the last decade.

But there has always been something romantic in the idea that England could somehow beat the biggest teams playing in an English style with a classic English centre-forward — with someone like Kevin Davies, only better.

Beating Brazil playing like Brazil? That would be good. Beating Spain with an English tiki taka? That would also be good.

Beating the best in the world courtesy of a “big No.9”? Nothing could be better.