Enough about Mo Salah’s first touch, we really need to talk about the second 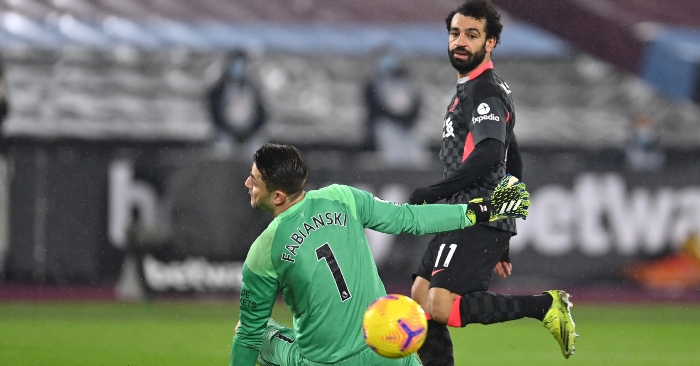 There was so much to look at, so much to take in. All of it in a flash, all of it before West Ham knew what had happened.

Eddie Howe said on Match of the Day 2 on Sunday night that more than four passes in a counter-attack and your chances of scoring start to decline. Liverpool appear all too aware of that stat.

Anyone who played organised youth football on the damp parks of the UK on dreary winter mornings would be able to tell you that technically that first touch was all wrong.

“Don’t trap it with your studs,” some fat bloke used to howl at you as the ball ran under your foot and out for a throw-in before he screamed at the rest of the 11-year-olds to “box them in.”

Fortunately for Liverpool fans Mo Salah wasn’t present on the waterlogged pitches of Britain’s parks to have his instinct and natural inventiveness crushed from his soul – he trapped the ball with his studs, and it was perfect.

But all of that is useless, all of it goes to waste, if it is not for the finish. And among all the noise about the other elements that led up to the goal, the impetuousness of the finish has been criminally overlooked.

If Salah traps it perfectly, but then takes another, heavier touch, Lukasz Fabianski is on him in a flash. If Salah takes that first touch, sees Fabianski coming, and takes it round him, then he has run the ball too far wide.

But Salah was as sharp as a katana.

His touch set it up, and then with the cheekiest, most perfectly weighted and perfectly timed outside-of-the-left-boot prod, he sent it rolling towards the far post; gently enough to almost tease the West Ham defenders who had busted a gut to get back, but firmly enough to nestle satisfyingly in the corner of the London Stadium net.

As Jurgen Klopp told Sky post-match: “In the past couple of weeks when we didn’t score that many, the only thing you can do when you’re not scoring is to keep trying to make better decisions.”

On Sunday in east London, Salah’s split-second decision making couldn’t have been more precise. And with it, he has snuck almost undetected, like a ninja in the night, onto 20 goals for the fourth season in a row. Salah and Liverpool were meant to be off colour, weren’t they?

“He’s a world-class player,” Klopp concluded. You’ll have to go somewhere else if you want to find someone who’ll disagree with Jurgen on that count.