Step aside, Alisson: River midfielder Enzo Perez is the GK hero of the week 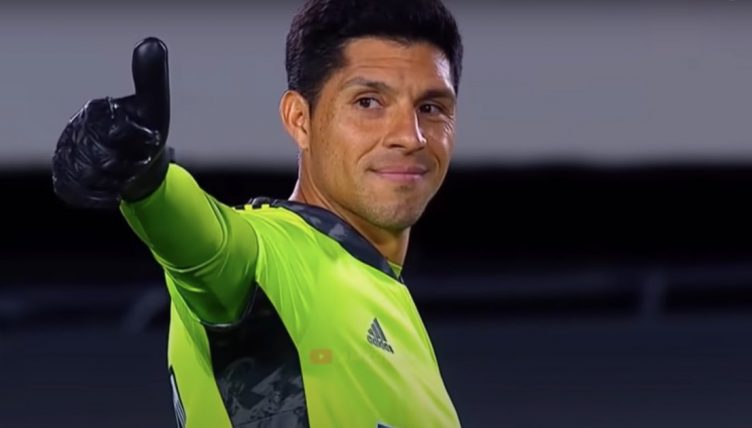 What’s more impressive: a ‘keeper scoring a goal, or a midfielder nervously flapping at loose balls for 90 minutes?

There’s no disputing that Alisson Becker’s goal against West Brom was a season highlight. Not only was it both funny and important, it was also unnecessarily good: the goalkeeper showed a striker’s instinct to find space and bonk the ball home.

That brilliant moment, potentially a season-defining one for Liverpool, took place on Sunday afternoon.

Given its seismic impact, most of us imagined, with some justification, that it would be the most remarkable goalkeeping-related switcheroo of the month, perhaps the season, perhaps the decade.

We didn’t imagine it would have immediate competition.

On Wednesday night, just three days after the drama at the Hawthorns and almost 7,000 miles away, another moment of extreme positional shuffling took place: one that lasted 90 minutes instead of 30 seconds.

Buenos Aires giants River Plate were due to face Colombian side Independiente Santa Fe in the Copa Libertadores, but with 20 players testing positive for COVID-19, they were left without a single goalkeeper available.

Having already been forced to field their fifth-choice goalkeeper in the Superclasico against Boca Juniors, River asked if they could register a youth keeper, CONMEBOL said no, and Perez was handed his biggest moment in the spotlight — sort of — since the 2014 World Cup Final.

The pandemic has impacted football in some very conspicuous ways. Empty stadiums, canned applause, the ‘Euro 2020’ tournament taking place in 2021.

But surely one of the strangest occurrences to date could be seen in Buenos Aires on Wednesday, with River Plate naming precisely zero substitutes out of a possible nine.

With 20 players ruled out, the Argentine team were given no mitigation, and they ended up fielding the only 11 players they had available. Unfortunately for them, all 11 of those players were outfielders. This was a problem.

There were rumours a few days before the game that veteran midfielder Enzo Perez, formerly of Benfica and Valencia, would be forced to occupy the unfamiliar role.

Though he stands at just 5’8″, Perez had been nursing a hamstring injury and, with his potential impact in midfield diminished, was considered the least worst option. Under normal circumstances, he probably wouldn’t have made the squad.

It was a farcical situation, and one that Copa Libertadores organisers CONMEBOL could have rectified by allowing River an extra few players.

That being said, CONMEBOL perhaps aren’t quite the villains they appear to be: ahead of the tournament, River chose to register just 32 players out of a potential 50, a decision that clearly backfired.

Or, at least, it should have.

As it happened, the emergency deployment of Perez, who made his Argentina debut in 2009 under Diego Maradona, turned out rather well.

The potential for calamity was there, but Enzo Perez probably rather enjoyed being called up as a goalkeeper. Why? Because the midfielder has engaged in positional cosplay before, and has clearly revelled in it.

Although typically used in defensive midfield, Perez has also played plenty of matches on the wing — as he did for Argentina at the 2014 World Cup — and as a No.10. Versatility is his middle name, basically.

Prior to Wednesday, his biggest positional experiment had been for the national team, in a game that took place almost exactly 10 years ago.

That occasion was another Wednesday night fixture, a friendly between Argentina and Paraguay on May 25, 2011. Not only was Perez given the captain’s armband (for the only time in his career, on just his fifth appearance) he also played, quite competently, as a striker.

He scored his only international goal that day, scuffing a backheel when presented with an open goal, then quickly redeeming himself and scrambling the ball home.

Of course, playing a bit further forward is one thing; playing with your hands is quite another.

Nobody could argue that Enzo Perez looked comfortable in goal on Wednesday. Where Alisson Becker channelled the energy of a leaping Sami Hyypia, Perez could only channel the energy of a fish out of water.

And yet the veteran stood firm, taking several catches, making a few flaps and punches, and performing one action that might loosely be defined as a ‘save’, even though the ball was probably heading wide.

He attributed his success to practice with the goalkeeping coaches, taking on advice and using the penalty spot to keep his bearings.

When Perez’s goal was finally breached in the 73rd minute, River had already scored twice and could safely see out the game to record a genuinely historic win. Perez was rightfully named man of the match.

When all is said and done, Alisson’s match-winning header was perhaps a better moment than Enzo Perez playing in goal. More beautiful, certainly, and with a clearer impact: River might still have progressed from their group without a win in their game; Liverpool, however, would have been in serious trouble.

But there’s a different kind of joy to be found in the backs-to-the-wall performance of Perez and his team-mates.

Unlike Alisson’s goal, you can’t exactly set the events of Wednesday night to epic music. The hamstring injury, the tussle with bureaucrats at CONMEBOL, the slightly comic nature of the actual goalkeeping: none of this was particularly cinematic.

And yet Perez’s was possibly the more remarkable of the two topsy-turvy goalkeeping performances.

Dealt a catastrophically shit hand, the 35-year-old held his nerve, put on his best poker face and ultimately bluffed the unlikeliest win of his career.