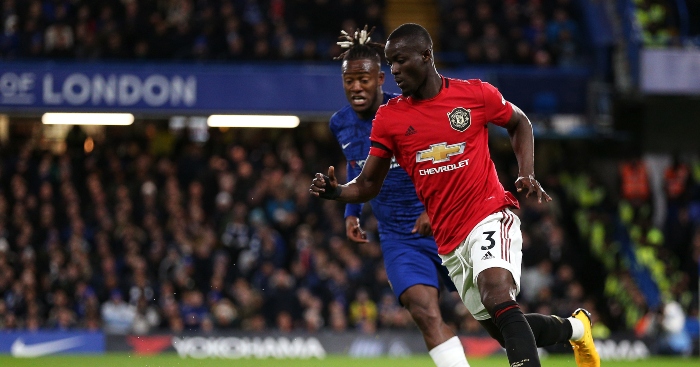 Eric Bailly returned to Manchester United‘s starting XI after months away and the Red Devils recorded a 2-0 victory over Chelsea. Coincidence? That’s not the point.

Bailly had been out of action since suffering a medial knee ligament injury against Chelsea back in April but returned against the same opponents as United picked up a valuable 2-0 victory at Stamford Bridge.

In these situations, it can be tempting to ease yourself back in to proceedings and not try anything too difficult. This, however, has never been the Ivorian’s style.

There are some people who will tell you a stepover inside your area is “a terrible idea” or “for clowns”. These people, put simply, are cowards.

Not only does Bailly have the stones to attempt this at all, but he does it in the first half of his comeback game with the score still at 0-0.

The potential downside, at least on the surface, appears to far outweigh any conceivable positive. But in reducing your analysis to something so simplistic, you’re forgetting the cachet attached to turning a theoretically terrible idea into moment of genius: none of this exists in a vacuum, after all.

It’s not that centre-backs aren’t necessarily meant to be able to produce such subtlety, though that is a part of it.

More crucially, a player like Bailly shouldn’t have the wherewithal not just to determine it’s the right move, but also to ignore that voice in his head that asks, “What the hell are you trying to do?”

Yet, in turning Michy Batshuayi from the hunter into the hunted, he puts his team on the front foot from thereon out.

The secret to muffling the screams of terror, it turns out, is to drown them out with forced speechlessness. If you critics have no words for what you have attempted, they can’t have any words of criticism.

In producing a piece of skill with no tangible benefit from a statistical point of view, Bailly has defeated football’s numbers game by pitting it against his own distorted take on theoretical linguistics, and you can’t shut down what you don’t understand.

Just in case anyone was concerned about Bailly doing some actual defending – you know, that thing he was signed to do what feels like an eternity ago – he had some of that in store later on.

Having earlier produced a strong tackle to snuff out a Chelsea chance, he came out of nowhere later on to deny Mateo Kovacic and ensure United remained two goals clear of their opponents.

It was the kind of thing that had you checking your notes, making sure this really was a man playing his first minutes of the season and not a seasoned pro in the middle of a career-best season, but there’s an extra level to all of this.

The intervention was impressive, sure, but it also casually reminded us of the preposterousness of his earlier stepover. 2-0 up being a time for no-nonsense defending and a goalless first 40 minutes acting as a trial period for off-script skills? That doesn’t just feel like the wrong way round – it feels like an affront to the broader concept of urgency.

After months of head-scratching over a defensive set-up which sparked confusion as much as it did praise, it would be wrong to think of Eric Bailly’s return as anything approaching a solution to that problem.

Indeed, his unique style is more likely to exacerbate that issue, taking fans’ heartbeats from zero to 180 within the space of 90 minutes, but even that can be considered a step up from whatever it is they’ve been watching under Ole Gunnar Solskjaer with the Maguire-Lindelof partnership.

Sometimes you need to introduce a bit of extra peril into your life, just so you can feel something again, and Bailly has shown he can deliver.