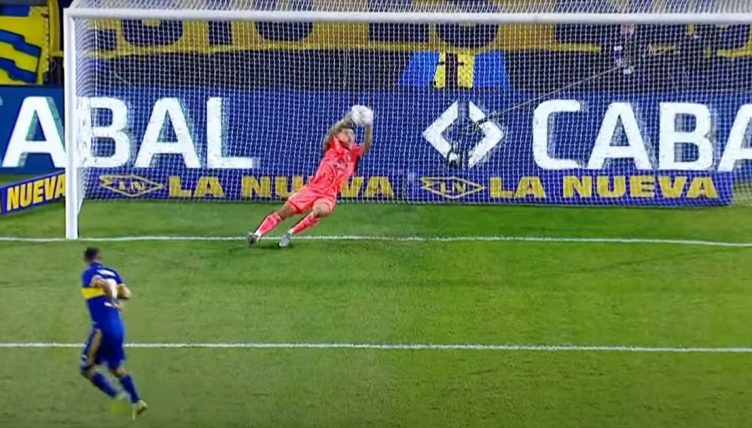 Last weekend, 21-year-old goalkeeper Leo Diaz sat on the bench watching River Plate reserves win 4-2 over Independiente reserves. At that point, he was the second-choice goalie in River’s second team and had yet to make his debut, even at that level.

As recently as Friday morning, there were four players ahead of him in the queue for the club’s overall No.1 jersey: Argentina ‘keeper Franco Armani, as well as Enrique Bologna, German Lux and the reserve team’s first-choice Franco Petroli.

On Sunday night, though, it was Diaz who lined up in La Bombonera for River’s first team in a knockout Superclasico – and it was Diaz who made himself a hero, even as Boca went through to the semi-finals of the 2021 Copa de la Liga Profesional. As debuts go, they don’t get any bigger or much better.

River’s preparations for their Superclasico quarter-final had, as Diaz’s inclusion suggests, been far from smooth. In the week, 15 of their players had tested positive for Covid-19. On Friday, Diaz received a phone call informing him that four of them were the four goalkeepers mentioned above.

He was going from reserve in the reserve team to playing in the biggest game of his life and one of the biggest in River’s season.

Like any self-respecting gentleman, the first thing he did was call his barber and ask if he had time to give him a quick, pre-debut shape up. That done, he had the daunting prospect of Carlos Tevez’s shooting to contemplate.

After 11 minutes, Tevez barged his way into the penalty area, clearly fouling River centre-half Jonathan Maidana. But somehow he got away with it and shouldered the ball past a helpless Diaz in goal.

That, though, was not enough to break the young goalie’s spirits. He kept his chin up and, in a team half full of reserve players, put in a display that kept River in the game.

There were four crucial saves, three of them from Tevez himself. Diaz had double-handedly stopped Boca putting the game out of reach. Then, against the odds and the run of play, 21-year-old forward Julian Alvarez drew the visitors level.

That took it to penalties, where Diaz stood up to Edwin Cardona’s attempted Panenka and made the Colombia international look as ridiculous as you deserve to look for trying a Panenka in a Superclasico.

Unfortuatnely for Diaz and River fans, those heroics were not quite enough to put them through. Leo Ponzio and Fabrizio Angileri both missed from the spot and Boca converted all of their other spot kicks. After six successive knockout defeats to River, it was Tevez’s team that went through to the last four, where they will face Racing.

Diaz, though, had earned the respect of friend and foe. After the game, Tevez said: “I congratulated him. He was in his house and they called him to play. You have to take your hat off to him.”

Legendary River and Argentina ‘keeper Ubaldo Fillol echoed those sentiments on Twitter. “I’m happy for Leo Diaz’s great debut performance,” he wrote. “I’ve known him since he was a lad and I know of his sacred fire and personality. He’s a goalkeeper with great future. He was the figure of the Superclasico and with his saves honoured the history of the Millionario goal.”

However long and successful his career is, Diaz will have to go some to top a debut like that.