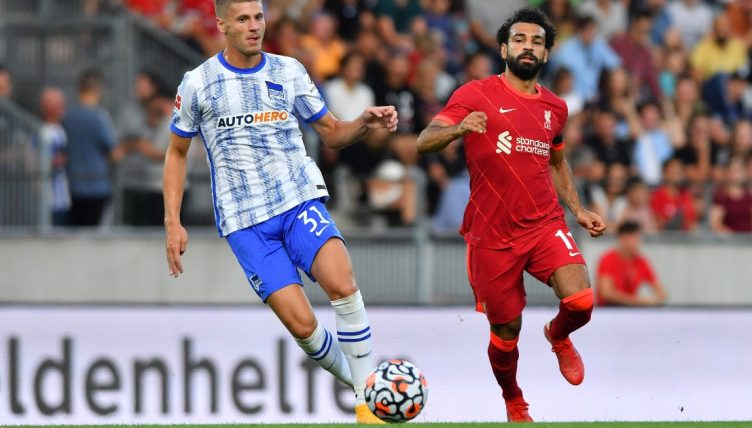 Liverpool lost, conceded four and he did not even score – yet still, Mohamed Salah managed to steal the show against Hertha Berlin on Thursday night.

Despite 16 out of 20 Premier League teams being owned by billionaires (either individuals or consortiums), it is Salah who is most regularly branded with the selfish tag. But perhaps in some twisted way, his most recent performance proved his critics right.

One story dominated the build-up; the return of Virgil van Dijk and Joe Gomez. And why wouldn’t it? The duo proved a domineering presence together as the Reds claimed their first top-flight title in 30 years. The loss of both, however, proved a huge hindrance in 2020-21, as Jurgen Klopp’s men scrapped for their place in the top four.

But they were back, the pair introduced in a double substitution in the 69th minute, embracing in an emotional moment before entering the field.

However, in typically selfish fashion, Salah had already provided the moment of the match.

With Sadio Mane bringing Liverpool back into proceedings after two early Hertha goals saw them trail 2-0, the Egyptian ensured that the scores were level at the break.

A great tackle and pass from Naby Keita let Salah run clean through on goal. Remember, there is no one more selfish than Salah. He would rather shoot from a narrow angle than play a simple square pass to a team-mate, even if that pass would prevent a nuclear missile strike. Ignore the fact he has 47 assists in 203 games for Liverpool, though.

What a nice assist my Mo Salah with the finish by Taki pic.twitter.com/Bt5gdTQRWX

As he ran through on goal in Austria’s Tivoli Stadion – the ball on his stronger left foot, a shot inevitable – the ex-Chelsea and Roma man instead chose to flip a middle finger to those critics, setting up Takumi Minamino to slot home the equaliser in the 42nd minute.

In doing so, however, Salah still managed to show a slither of selfishness. Given the outrageous nature of the slick, backheeled pass, no one was interested in the goal. So unexpected was the assist that it left Hertha defender Marton Dardai attempting to block a non-existent shot – Salah sending the 19-year-old sliding into the front row instead.

It was Minamino’s name on the scoresheet but it was second to the selfish moment of unselfish brilliance from his team-mate.

Considering he scored 31 goals in all competitions last season – 15 more than Sadio Mane – it is strange that Salah is the one expected to do more. He even ended the Premier League campaign with as many assists as golden child Mason Mount.

This match was supposed to be about Gomez and Van Dijk. But that pesky Salah, with his impeccable footballing brain and ingenuity, just had to make it all about him. Again. Selfish.