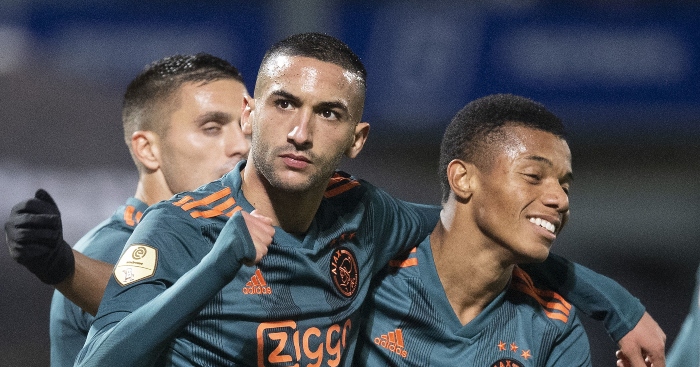 Hakim Ziyech was supposed to leave Ajax after starring in their run to the 2017 Europa League final. He was meant to leave after his 2019 exploits, too. But when you’re enjoying your football so much, why wouldn’t you stay?

The Moroccan was linked with a number of Premier League teams after taking the Dutch side within a minute of another European final last season. But while the likes of Matthijs de Ligt and Frenkie de Jong left Amsterdam, he opted to stick around.

While some expected a transition period, both Ziyech and Ajax have picked up where they left off, scoring 39 goals in their first 12 Eredivisie games and recording two 3-0 wins in the Champions League. Naturally, Ziyech has been at the centre of it all.

Since joining from Twente in 2016, the playmaker has recorded an average of 13 league assists per season. He topped the charts in the Dutch top flight in each of those campaigns, and he’s more than halfway towards the same total in just 11 appearances this time around.

Three of this season’s assists arrived in the 4-2 victory over PEC Zwolle that sent Ajax six points clear at the top of the table. Each utilised his wand of a left foot, but the trio of passes showed how much variety you can put into things which contain so many of the same component parts.

The first of the three is a relatively straightforward hanging cross (at least for a player of his quality), planted onto the head of summer signing Quincy Promes.

The former Sevilla forward has scored 10 goals since moving back to his hometown club in the summer, more than a decade after he left Ajax’s academy, but this was the first to be laid on by Ziyech.

For assist number two, Ziyech doesn’t wait until he’s out towards the touchline to send in a cross. Sure, the floated ball might look better with a cleaner and more immediate contact from David Neres, but another way of looking at it is to recognise how the ugliness of the finish serves to make the pass look more beautiful in contrast.

When Ziyech looks up, he closes his eyes to everyone other than the Brazilian, ensuring any attempts to intercept the ball will merely illustrate its perfect trajectory.

Sometimes the Mona Lisa can look even more eye-catching when ported from the Louvre to sit aside a high-school art exhibit, and that changes nothing about its own innate beauty.

If you’re dealing with a player capable of such effortless accuracy, it can almost be more tempting to refuse to stand off and instead force them to operate at higher pace and intensity, risking a mistake in the process.

That is not an option here.

Goal number four for Ajax, and assist number three for Ziyech, followed a driving run into the Zwolle box and an exchange of passes with Promes, before sliding the ball across to give Neres a tap-in.

You can know not to stand off and let a player pick his spot, but when this is the alternative you can be forgiven for feeling entirely lost.

Ziyech showed plenty of this in last season’s Champions League, which makes it all the more surprising that he didn’t follow De Ligt and De Jong in making the move away from the Netherlands.

However, you get the sense this was not due to any lack of ambition, but rather because he feels he can fulfil that ambition at the Johan Cruyff Arena.

Can you blame him, when he has been putting in defence-splitting passes at the business end of the biggest competition around?

Watching Ziyech lay on Donny van de Beek’s goal at Tottenham, it’s clear we were watching a man who felt all-powerful, who wasn’t going to let the identity of the opposition stop him from doing his job.

It feels like a microcosm of Ajax’s entire season, which featured victories over Juventus and Real Madrid when even one of those results seemed like a long-shot. The idea that you can just play your own game and the rest will take care of itself has rarely worked so brilliantly.

The one reverse of Ajax’s season so far, the one time when things haven’t really gone to plan, came at home to Chelsea.

After back-to-back 3-0 victories over Lille and Valencia, with Ziyech picking up an assist in the former and the opening goal in the latter, they drew a blank against their Premier League opponents.

The strike in Spain came early enough that Los Che were still probably formulating a plan about how to deal with his threat, only for him to stun them – and goalkeeper Jasper Cillessen in particular – while they were still repeating their manager’s advice to themselves.

At least they stopped him producing another assist.

Chelsea will feel confident of victory, having already beaten Ajax once this season, but they’ll know not to underestimate a team which has already surprised plenty of people simply by remaining a force after last season’s exploits.

Still, Frank Lampard’s team may well feel they’re better served not putting all of their efforts into denying Hakim Ziyech.

Part of this is because Ajax have plenty of other talents available, not least fellow 2018-19 returnees Neres and Dušan Tadić.

More importantly, though, even if you try to stop Ziyech he’ll probably show you exactly why such a thing is impossible.