Everything that happened during Thierry Henry’s first match in Montreal 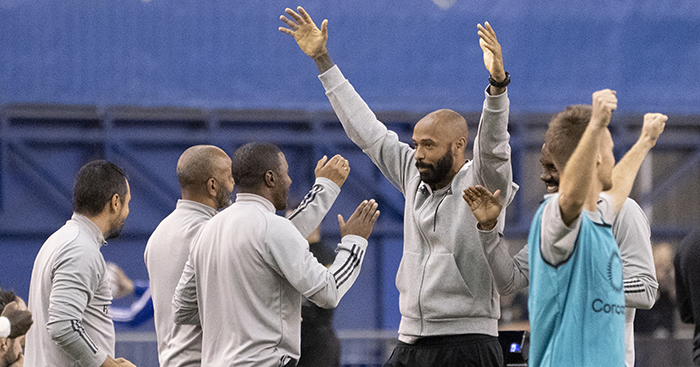 Thierry Henry is attempting to rebuild his managerial career in Canada. Here’s what happened during his first home match with the Montreal Impact.

After joining AS Monaco in October 2018, the former striker lasted 20 stressful games before getting the axe, and was criticised for his unusual style of man-management.

The most memorable moment of his tenure was when he publicly shamed teenage defender Benoit Badiashile, who had forgotten to tuck in his chair.

But Henry is back in the game — albeit a game played on astroturf.

In November 2019, around 10 months after his Monaco sacking, the former striker joined the Montreal Impact of MLS, linking up with former team-mates Bojan Krkic (ex-Barcelona) and Rod Fanni (ex-France).

Henry, who scored 51 goals in MLS with the New York Red Bulls, called it “an honour” to manage the Canadian side.

It was a tense, exciting game, and one that cast the former Renault ambassador in a new light.

Montreal, for those accidentally thinking of Montreux, Monterrey or Montserrat, is a city in the Canadian province of Quebec.

However, the Montreal Impact — along with Toronto FC and the Vancouver Whitecaps — play in Major League Soccer, the football league of the USA. (Canada only recently launched the Canadian Premier League, which is growing but yet to attract players of the highest calibre.)

In many ways, it’s a good gig for Henry.

Montreal is a French-speaking city, and although the Impact are not a major force in MLS, the club has a strong following and has attracted big names in the past.

Alessandro Nesta, Marco di Vaio and Didier Drogba have all worn the blue and white shirt. As has Nigel Reo-Coker.

Henry also knows the league, having played in New York for five seasons.

But the appointment is surely a bigger coup for club than manager. You can see Henry’s face plastered on bus stops around the city, and the superstar promises major pulling power.

In theory, at least.

Shortly after Henry joined the Impact, the official MLS blog published an article discussing players he could bring in.

The reality has been quite different.

Since Henry’s appointment, the Impact have lost arguably their best ever player, Argentine playmaker Ignacio Piatti, and signed a mix of Canadian nationals and youngsters. The biggest arrival has been Romell Quioto, a winger with 47 caps for Honduras.

In fact, the club’s quota of former Henry team-mates has actually decreased.

Bojan and Rod Fanni both once played alongside their current manager, but full-back Bacary Sagna, who lined up alongside Henry for France and Arsenal (during the striker’s 2012 loan return), sadly left Montreal at the end of 2019.

Impact, owned by a cheese company, used to sell a Bacary Sagna sandwich. It’s no longer on the menu. 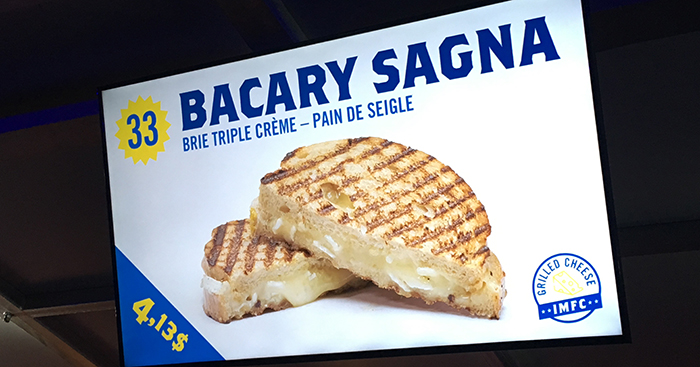 So Henry is either happy to build his team around young local players, or his more ambitious transfer attempts have failed.

Either way, it wasn’t going to dampen proceedings at the Olympic Stadium on Wednesday night.

Nor was the snowfall outside, handily kept off the astroturf by a deteriorating roof that fully encloses the 60,000-seater stadium.

The indoor affair, watched by around 20,000 fans occupying the lower tiers, had the simultaneous feel of a cup final and a PE lesson, although the noise — amplified by the lack of open air — occasionally reached admirable levels.

This was the second leg of a CONCACAF Champions League Round of 16 tie, with the Impact earning a 2-2 draw in Costa Rica last week.

The lineup for the home leg contained many youngsters, including Canadian rookies Zachary Brault-Guillard (21) and Shamit Shome (22), as well as an English teenager, former Tottenham academy defender Luis Binks (18).

Bojan was the biggest name on the pitch, as other big earners started on the bench. Saphir Taider, the Algerian international midfielder, was one of them, while Argentinian striker Maxi Urruti, a workhorse with a man bun, donned his bib the entire game.

But the teamsheet did contain one obvious throwback to Henry’s playing days.

38-year-old centre-back Fanni, who clearly remembers that Henry played with William Gallas during the 2006–07 season, wore the No.7 shirt.

The Impact only needed a low-scoring draw to progress here, and you could tell.

Goalkeeper Clement Diop started time wasting after 20 minutes, and attacking fluency was at a minimum.

That almost cost the home side in the 5th minute, when veteran Saprissa midfielder Christian Bolanos was denied by the quick-thinking Diop. Marvin Angulo volleyed into the side netting seconds later.

As Impact struggled to pass the ball, Henry fretted on the touchline, offering more shrugs of annoyance than claps of support.

But though his team struggled, they had a golden opportunity to take the lead just before half time. Right-back Brault-Guillard drove forward with a brilliant run and fed Quioto, whose cutback was almost converted by Shome.

Saprissa needed a goal to progress and dominated the second half, but chances were scarce.

Henry does a very French gesture as Bojan leaves the pitch

In the 64th minute, a wayward high clearance looped towards the Montreal technical area. Henry faced the incoming ball, bent forward, and extended his right leg behind him to catch a volley on his heel.

He failed to make contact, and the crowd sighed.

The other dramatic moment of the second half came in the 89th minute, when Saprissa midfielder Mariano Torres thumped a goal-bound shot from 25 yards, catching the ball sweetly.

But Diop pulled off a spectacular save, which prompted the loudest applause of the night.

Henry’s Impact held on and, despite enjoying just 29% possession over the night, progressed to the quarter-finals on away goals.

For starters, the team’s Catenaccio on Wednesday — hardly what you’d expect from Henry — was apparently a temporary measure.

After the game, the Frenchman stressed that his team had “to play a certain way” given their lack of fitness, and promised that “style will come later.”

And on a more practical level, the Impact will play just two more fixtures under the roof of the Olympic Stadium.

Once the long Canadian winter is over — Montreal temperatures hit a low of -24°C this month — the club will move to its permanent home, the smaller and mostly open-air Saputo Stadium, complete with real grass.

That being said, when the Saputo does open its doors in mid-April, the pitch will look like shit.

So Henry has passed his first test as Montreal manager. Next up is the MLS opener on Saturday, and the Frenchman will be hoping to guide his team to their first playoff appearance since 2016.

He might need some more old friends to do it, but his home debut has provided reasons for optimism.