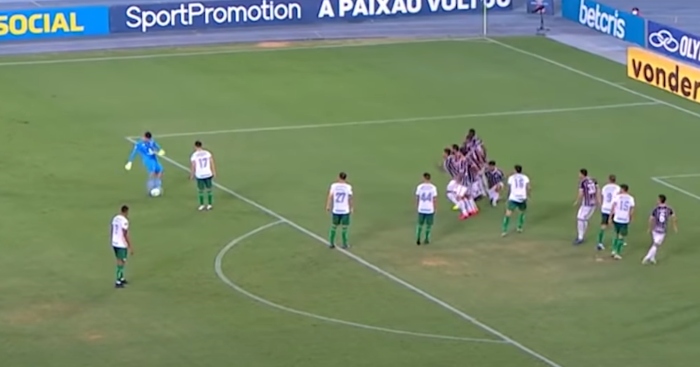 There are moments in time when football just reaches peak football. So perfectly theatrical, so full of suspense and surprise that there is nowhere left to go, nothing more to add. On Sunday night in Rio de Janeiro, Fluminense vs Goias delivered us one of those climaxes.

On Saturday we had seen a bore-fest in the Copa Libertadores final at the Maracana, a terrible letdown given what the fixture had promised.

But just across town the following day, the gods of the beautiful game decided to make up for it with a little sprinkle of magic dust for those who hadn’t abandoned their telly in despair.

Fluminense hosted Goias at Botafogo’s Engenhao stadium and, as the form books suggested they might, stormed into an early lead.

While Goias scrabble around in the Brasileirao relegation zone, Flu have been having quite the season – against all expectations they are fifth and still in with a chance of sealing automatic qualification to next season’s Libertadores group stage.

By the 36th minute, the hosts were three to the good – one an unlucky own goal from Goias ‘keeper Tadeu.

Goias, desperate for a lifeline to get back into it before half-time, threw caution to the wind. With the drop looking an increasingly likely prospect, they had no choice.

A foul was won on the edge of the area and up stepped Tadeu to try and make amends.

In South American football, the idea of a ‘keeper taking free-kicks is not as aberrant as it might seem to the European audience.

One-club man Rogerio Ceni did it brilliantly throughout his career, as did Paraguayan No.1 Jose Luis Chilavert. And just this weekend, angel-winged Colombian goalie Sebastien Viera whipped one into the net for Junior de Barranquilla in the Categoria Primera A.

Tadeu has scored in a professional game before – converting a penalty for Ferroviaria in 2018. And a video emerged last year of him stroking dead ball after dead ball into the top corner in Goias training.

But when you step up to take a kick with millions watching on TV, the pressure is different. To misquote The Wire’s Omar Little: “You come at the free-kick, you better not miss.”

Unfortunately for Tadeu, he did. Worse, he failed to get it over the first man.

After curling it right into the wall, Tadeu watched his shot rise and rise, trying to get under it for a second crack.

Instead, it spun and bounced away from him and on Brazilian TV, commentator Dandan screamed: “Look at the mess he’s in!”

It was indeed quite the pickle.

Flu regained possession and were away; the ball was fed to Nene. And if you’re now thinking, ‘That Nene?’, then yes, that Nene.

READ: A tribute to Nene at PSG and his ‘right man, wrong time’ act at West Ham

He might now be 39, and he might be even more immobile than he was when Big Sam signed him for West Ham in 2015. But the quality in the former PSG No.10’s left foot has not dissipated.

He was 70 yards from goal, but if Flu could have chosen anyone to find themselves in that situation, goal gaping, then it would have been him.

Nene looked up, and bang. It sailed and sailed, rising and falling. The direction was right – of course it was. The bounce looked good and… no!

The ball jumped off the uneven surface onto the bar and, after a wonderfully dramatic pause, dropped over the other side for a goal-kick.

Flu fans might argue that a goal would have been the perfect ending. We would beg to differ – for pure theatre, what transpired could not be topped.

As Tadeu jogged sheepishly back to his six-yard box to restart play we can only imagine he promised himself that goal-kicks will be the only set-piece he strikes for the foreseeable future.